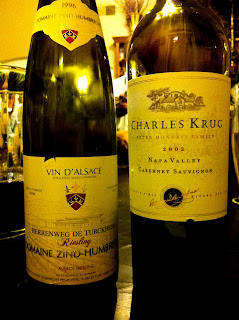 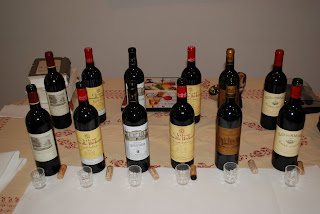 Wine tasting is a subjective experience. Not only do different people with varying palates receive divergent experiences from the same wine, but quite often a given person can have receive different impressions depending on the context in which wines are tasted. A chatty cocktail party setting for instance is not conducive to a serious tasting experience because the taster is distracted by the social milieu. Likewise, wines accompanying food can give tremendously variable experiences than those tasted alone.

In a serial tasting where several wines are being experienced in a row, devoid of chit chat, food and other distractions, the order of the line-up and the juxtaposition of flavors can have dramatic influence on the tasting experience. For instance, the lower photo depicts six Bordeaux wines each of a different succesive vintage from 1995 to 2000, which we tasted two weeks ago at my friend Padmesh’s house. There were fourteen tasters, including three wine professionals, and we quietly experienced them all, took notes and discussed each wine one by one, a typical serious tasting. While different people had varying likes and dislikes, we all agreed that had we experienced each bottle solo, say at home with our spouse, or in some small dinner gathering, we would have loved them all. But here we were pitting the labels against each other, and the process called for comparison, automatically forcing us to declare some as ones we disliked.

Last night we discovered a yet more raw example of line-up induced variation during our weekly Friday night blind tasting. It involved the two bottles seen in the top picture. The white, a 1996 Zind-Humbrecht Riesling from a special vineyard (Turkheim) came first in a line up of 7 bottles. The red, a 2002 Charles Krug Cabernet Sauvignon from Napa, came 5th.

We all guessed the Riesling for what it was, although because of a slightly higher sweetness than we usually expect from Alsace, we thought it would turn out German, and it wasn’t. It was a well aged complex wine, with a very long green-apple flavored acidic finish. We all liked it, and were not surprised that such a grand wine came from a well known, venerable Alsatian producer. Our group’s palate is tuned to the Old World, and oakiness to which we seem to be very sensitive, is usually a turn-off for us. The Charles Krug, while also well preserved, complex and elegant, featured an oaky vanilla nose, and a similarly oaky finish that is a common characteristic of California Cabernet. The group immediately tuned into this and guessed what the wine was, declaring it “no good”,and  “containing too much oak”.

Then came a surprise. Larry Johansen, owner of Wine Wizard’s showed up late (as he usually does, after his store closes), and tried to catch up with us. In so doing, he inadvertently tasted the Riesling first and the Krug Cabernet immediately after. And guess what? He guessed the Napa Cabernet to be a Southern French wine. He didn’t think there was much oak in it. We were stunned. Was Larry having a really off night? How could he miss such an obvious domestic Cab?

I decided to do what Larry did and went back to the Riesling, immediately following it with the Krug. To my amazement I discovered that the green-apple acid finish of the Zind-Humbrecht did indeed neutralize the oak in the Krug, and made it seem something totally different than what it was. When I announced this to the group they all repeated the experiment and agreed. Zind-Humbrecht and Krug made strange bedfellows indeed, but starkly demonstrated the powerful influence of precedent wines in a line-up tasting, a fact we often ignore and should not.

IN THE HEART OF GERMAN WINE COUNTRY; DOCTOR’S VINEYARD AND AN UNUSUAL TASTING (DR THANISCH WINES)