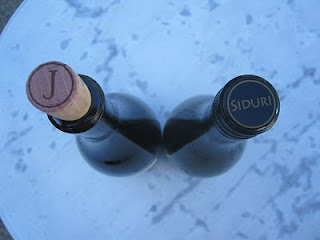 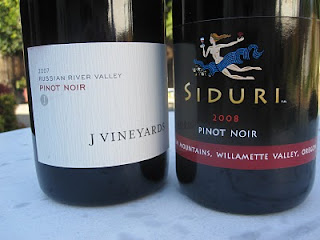 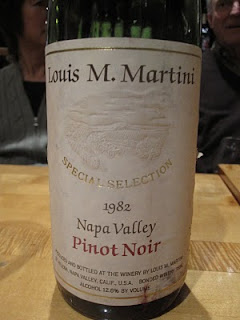 Evolution, in a biological scale, takes millenia. When it comes to the wine business however it seems to be one human generation. the wines you see in the pictures above provide a great example of this process.
The wine in the bottom photo appeared in a blind Friday night tasting recently. My friend Padmesh who brought it meant for it to be a novelty, or maybe a joke. It is a 1982 Louis Martini Pinot Noir from the Napa Valley. Those who tasted it immediately upon opening found an old musty nose, very little fruit left, but still a drinkable structure of body, acid and alcohol. It tasted like an old Burgundy, or maybe a very old Barolo. Those who tasted it it later, found it undrinkable. Oxidation had rapidly killed this one-foot-in-the-grave wine.
I was surprised that a pinot noir made that long ago could actually be drinkable now. I was more surprised, – shocked I should say – when I found a 1966 and a 1959 version of the same wine on the internet. The latter, a magnum is for sale at K & L for around $150, for those willing to risk that kind of money just for curiosity.
The reason for my surprise is that California winemakers did not “break the code” of pinot noir making until the late 1980’s. Before then this fickle grape, notoriously difficult to grow, was also known as the “heartbreak grape” for the countless disappointments it induced in failed growers. Some pioneering wineries are considered prime among those who perfected pinot noir making such as Hanzell and Chalone, and eventually those in Carneros. Louis Martini is not among them. But here they were, making drinkable, if not unelegant pinots all along. As such this Louis Martini represents pinot noir “pre-history” in California.
Now for the top two, J Vineyards and Siduri, one in Russian River, the other in the Willamette Valley of Oregon, both well respected regions for the grape. They were gifts from Mike Hernandez, a friend in Fresno. He found them in a local grocery store for around $ 10.99 each and texted me about whether he should buy them. When I replied in the affirmative he did, and sent me an example of each. I was intrigued because nowadays, after the movie “Sideways”, it is hard to find this varietal at such a cheap price point.
When I tasted the two I found them to be undrinkably bad, and surprisingly similar in character. Flat, uninspired fruit, too much sweetness in mid palate, too much oak in the finish. The wines were clearly cheaply made from “reject” juices, the better stuff undoubtedly bottled for more expensive “reserve” or “special vineyard” designations. These were mundane, pedestrian, copycat pinots made for the non-discriminating masses, most likely in bulk.
Where have we seen this phenomenon before? Hmm…Does chardonnay come to mind? This other grand grape of Burgundy was also at one time a novelty, craftfully made, until it caught on, and under massive demand, turned into the quintessential “coca-cola – pepsi-cola” wine of all time, mundane, uniform and indistinct. It developed enough mass appeal that we are now in the midst of a massive new anti-chardonnay reaction, large enough for producers to take notice and create such previously unknown entities as “unoaked chardonnay”.
The J and Siduri, as the modern “chardonnays” of the newly hip pinot noir world, represent the rapid evolution of the varietal, from a tough to make novelty in ’82, to mundane mass production in 08 in 26 years, roughly one human generation. It has happened faster with pinot noir than with chardonnay because overall demand and interest in wine is much greater now than in the 1960’s and 70’s when chardonnay began its rise to the top. Let’s hope that the backlash comes sooner too.

AMARONE IN BELLAGIO; A SHORT STORY

FROM WEDDING TO RETIREMENT; A SAGA OF SIX LITERS