WHORES AND CRITICS; HOW THEY ARE CHANGING THE WINE WORLD 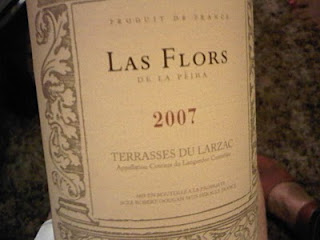 What I am about to recount has become a common refrain in the wine world. Maybe it will come out with a bit of a personal spin.
I recently joined a red wine club at K & L, a Bay Area wine chain, which sends me two bottles a month. The store is well diversified, and does not particularly specialize in anything. Thus the bottles they select for shipping end up being a hodge-podge of what they think their customers will like, cutting accross different regions and varietals. I find these samples quite refreshing, because many are wines I would never select off a shelf for purchase. Nor are they wines that my friends possess. The bottles give me a sense of what the wider wine world is drinking out there.
Thus I brought the above pictured bottle, a recent club selection, to a blind tasting with much anticipation. It is from the vast Languedoc region of France, which covers a large swath of territory between Provence and the Spanish border. Languedoc has traditionally been a high volume, low quality area, much lower in respect as compared to its northern brethren such as Bordeaux, Burgundy, Loire etc. In the last decade or so, the region has attempted to remake its image, and various enclaves of higher quality wine have emerged, usually at bargain prices. It is a region where experimentation is easier because the restrictive AOC rules governing the more famous regions, here are lax. One can expect anything from Languedoc.
The bottle we sampled is entitled La Flor de la Peira en Damaisella and it comes from a little known appellation within Languedoc called Terasses du Larzac, not too far from the better known Faugeres and St. Chinian. It is in the foothills of the Massiff Central, and features a rocky soil. The winery is a new venture, initiated in 2004, and first released in 2008 to much critical acclaim. The wine is 40% grenache, 40% syrah and 20% mouvedre. The name is not Spanish even though it sounds so; it is actually an old Acquitane phrase referring to the stony soil of the region.
This wine was not well received in our wine group. It was a high extraction, jammy wine, with big fruit, lots of sweetness, and worse yet, very high alcohol. The most common refrain from the tasters was that it reminded them of Port. For most red wines this is definitely not a compliment, unless the actual wine tasted is Port itself. I had brought along a little write-up from K & L concerning this bottle which arrived with the shipment. Here’s a quote: “On the palate is a kaleidoscope of flavors including dark black fruits, tobacco, smoke, cocoanut, chocolate and a touch of earth. The mouth feel is rich and dense with a long, decadent finish. This is a killer wine. ….Robert Parker’s Wine Advocate gave it 93-94 points.”
Huh?! Were Parker and us tasting the same wine?
Presumably!
For those of you who have never heard of Parker – I assume there are very few left out there -, he is arguably the most influential wine critic in the world. Since 1975 he has been publishing his opinions about countless wines in The Wine Advocate, giving the wines numbered ratings. Over the years, as his influence has skyrocketed he has achieved the highest distinction any human can expect in a lifetime: his name has become a verb. Many now refer to the “Parkerization” of the wine world. There is a general impression that Robert Parker likes high fruit, high extraction, high alcohol, “big” wines. Now that his numbered ratings can actually set wine prices, many wine makers in search of commercial success have sought high Parker numbers by producing such huge wines. This trend is further facilitated by various vineyard and winemaking techniques that have come into fashion, not to mention global warming which turns out to be a gift of nature for winemakes in search of riches through kissing Robert Parker’s ass.
Every celebrity has his or her detractors, and Parker certainly has acquired a large amount of ire from all over the wine world for what he has, advertently or inadvertently done. He is a “beating boy” for a lot of wine afocionados. And here we are now, with this newfangled production out of a little known region in a poorly respected area of France, instantly appearing within the great Parker’s radar screen. La Flors de la Peira has nowhere to go but the stratosphere, undoubtedly. Not in our world.
The experience was another episode in a string of countless examples we have encountered where undrinkably “big” wines made to please critics, erase terroir borders all over the world and all look alike. It is easier to understand this phenomenon when it comes from such New World areas as the U.S., Chile, Argentina or Australia. But the Old World, with its proud old traditions, best represented by none other than France, the cradle of wine civilization, ends up looking at best foolish, at worst like whores, when they cater to the tastes of such infidels as the American Robert Parker. There is nothing that irritates Bordeaux winemakers, arguably the historically premier wine region of the world, more than the fact that Parker’s reviews are influential in setting their prices. Vulgar Americans including Disney, Hollywood, McDonald’s, Ford and many more have invaded France and threatened its unique culture, as the French see it. But what the most vulgar of all, Robert Parker has done to them amounts to kicking the French in their collective balls, where it hurts the most, overtaking their wine culture.
As Francophile as we are in our wine tasting group, we can’t help but chukle at the meaning of wines like the 2007 La Flor, yet another example of a succesful French attempt to please Parker. And this is about all the pleasure we receive from this wine.
Moris Senegor