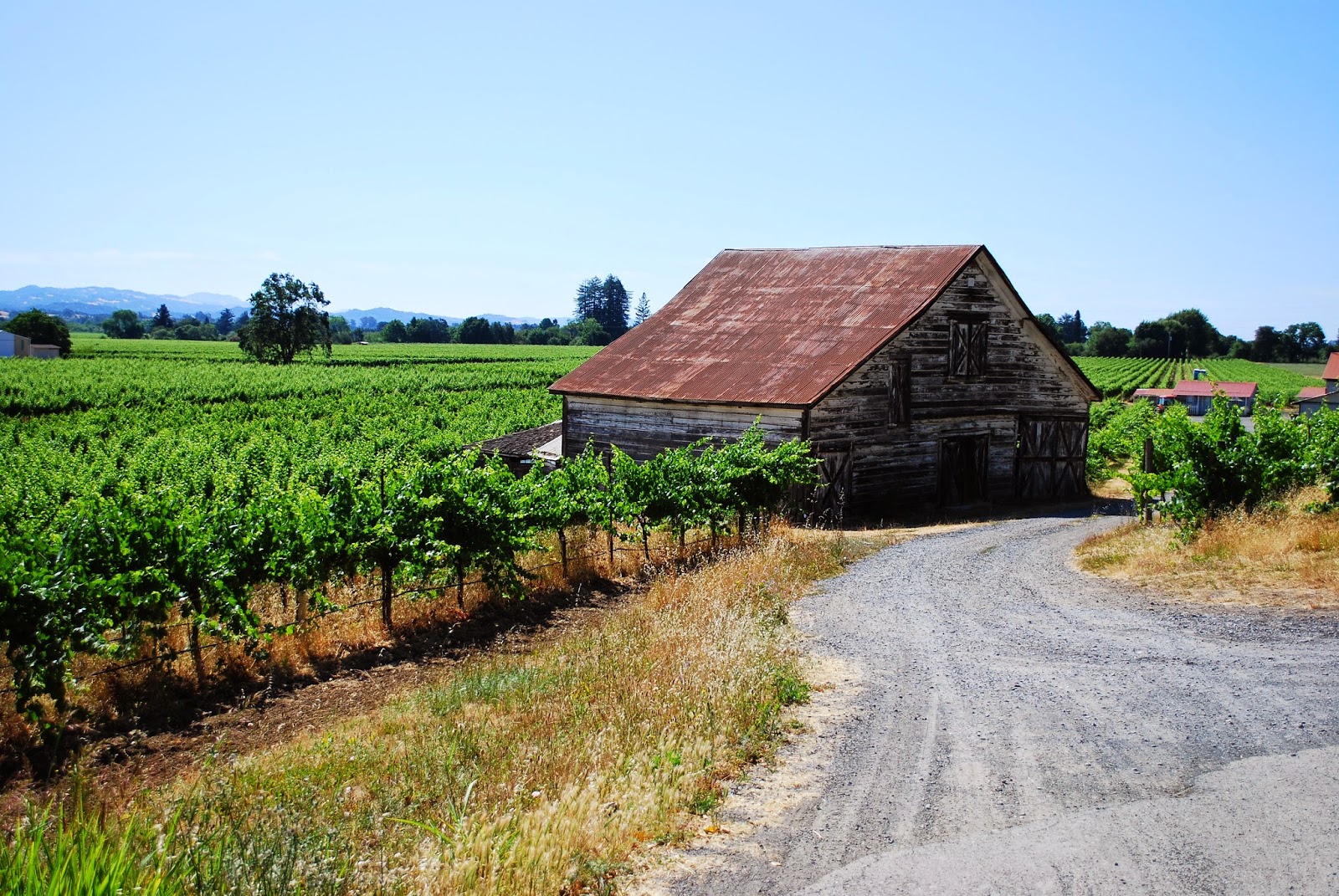 “It’s treacherous out there,” said the young man pouring samples of pinot noir at John Tyler, “every year several bikers get killed, mostly mowed down by trucks.”

We sampled the delicious pinot, the Russian River flowing within, and we ignored the warning. We mounted our bicycles and headed deeper into Westside Road, toward Gary Farrell. No amount of admonishment could counter the allure of  this wine trail.

We first rode this road four years ago on a lengthy 45 mile day coming in from the chilly, foggy Pacific Coast at Bodega Bay – on a typical mid summer there – through the mouth of the Russian River at Jenner, through majestic redwoods near Guerneville and after busy River Road. We bid farewell to the cool mist, surprised at how deep inland it reached, and understood for the first time why pinot noir thrives here. We rode bucolic rolling hills on Westside, sunny vineyards carpeting the valley nearby and we were charmed. Then came the wineries.

Westside is 12 miles, running south and then west from Healdsburg to River Road, a narrow country road with no lane markings and irregular pavement, not ideal for bikes. On weekdays it is mostly sleepy except for an occasional speedster pick-up or rumbling eighteen-wheeler that can put any cyclist on edge. On weekends, packed with wine-tasters it is nearly impossible.

Our server was correct, but we couldn’t help it.

Smitten that first time, we rode Westside the other way every year since from  Healdsburg toward River Road, never again aiming for the coast. On the way we became fans of some wineries. Our favorite: Arista.

Founded by an orthodontist from Texarcana in 2002, the winery is approximately at the half-way point on Westside. It produces Chardonnay and Zinfandel, but Pinot Noir is king here, made in both the American style, bold, fruity and alcoholic, and French style, subtler, lighter, silky. They also have some imported grapes from Wilamette Valley, Oregon. Their line-up includes a variety of pricy special vineyard pinot noirs, completing an assemblage that attests to the remarkable facility of the region with this varietal that was once considered impossible to cultivate in California.

We climb the low grade hill west off Westside road into the Arista property, enjoy their Japanese water gardens and modern sculptures, and enter a small, elegant tasting room, sampling whatever they have to offer while keenly observing a fetching photo-slide show on a large TV screen behind the bar. We bring some bottles back home,  a reminder of Westside Road for the remainder of the year. 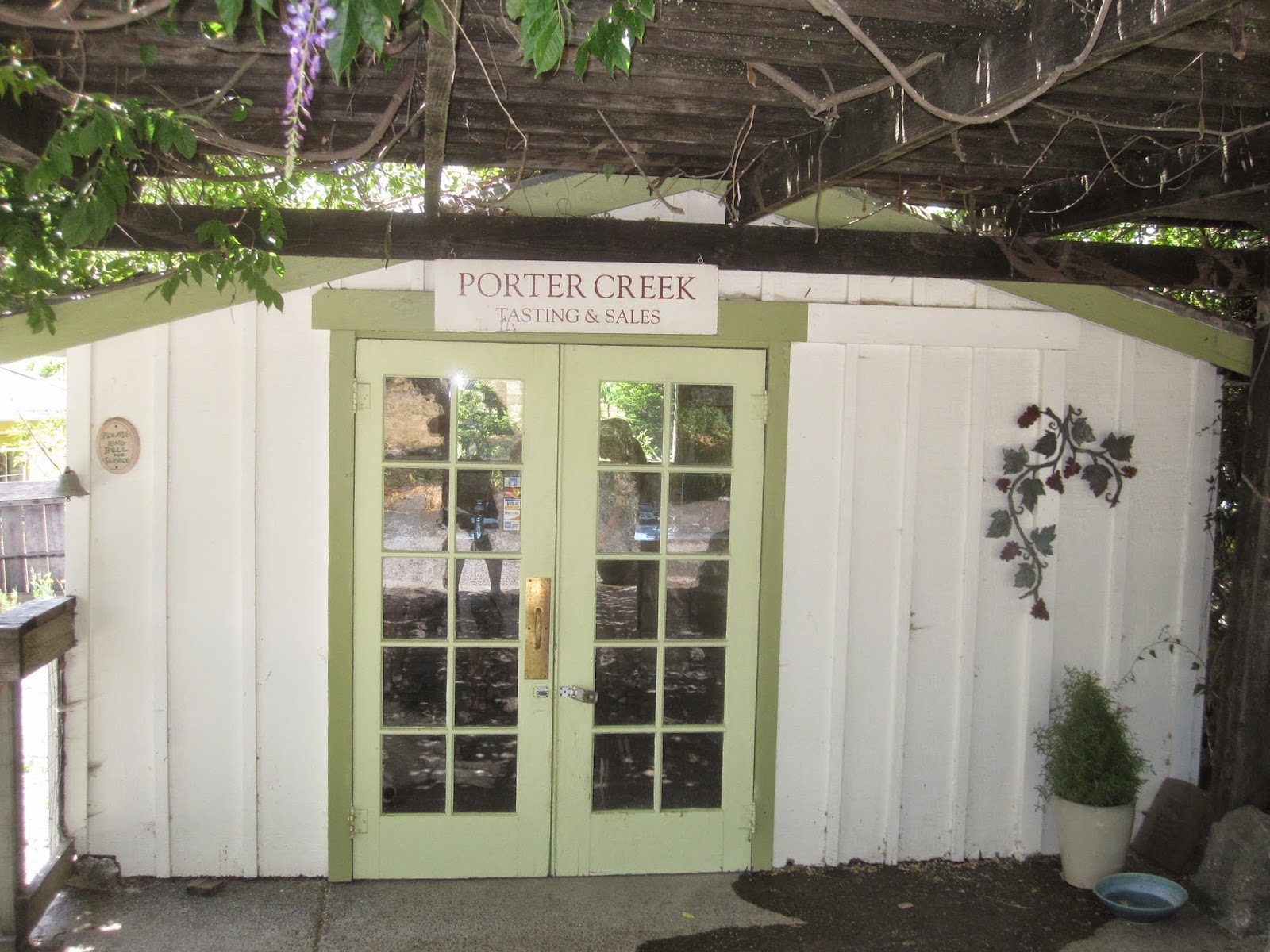 Beyond Arista the road follows sharp bends of the river,  flowing along lush but desolate countryside. Right before another turn over a low-bridge, set a bit inland is Porter Creek,  rough-hewn and homespun, a rustic country counterpart to the otherwise elegant estates that line the road.  Here, in their tiny, hut-like, rickety tasting room young men who look like Santa Cruz surfers offer a line-up of equally rustic wines in a friendly atmosphere for dirt cheap. We temporarily shed our slick-pinot-snobbery and enjoy the fruit of the earth in an earthy milieu. We have to spit it all like professionals, for they pour generously and we still have ways to go.

The first time we rode our bikes to Gary Farrell farther on, we had no idea how high atop a hill it was. We geared down as if it would be a climb into Arista. Soon we were huffing our bikes on foot up steep switchbacks, our hike as tough an exercise as a ride. But what a reward we received at the peak. Grand bird’s eye views of the Russian River Valley in a well accoutered complex serving 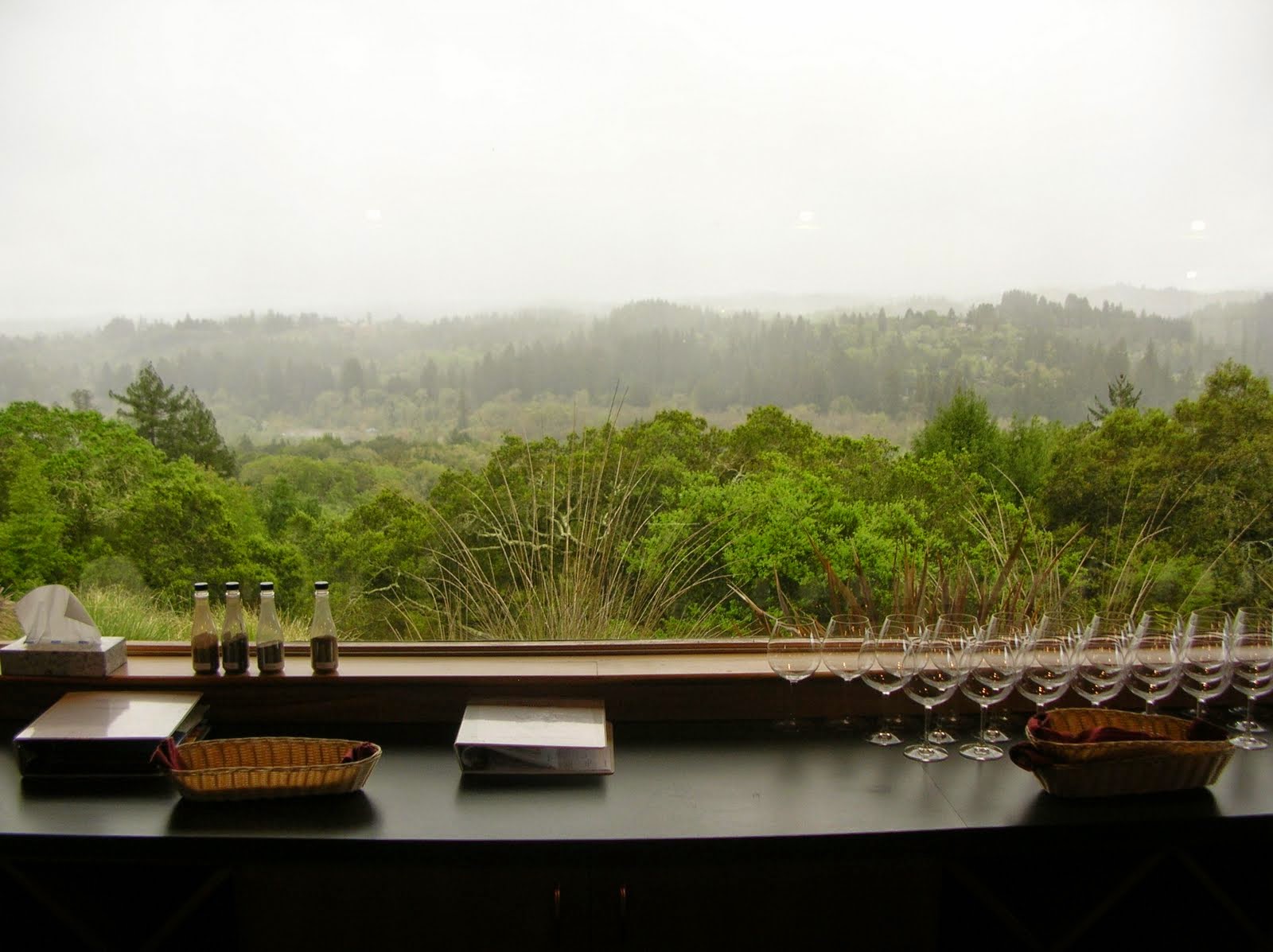 elegant pinots that made this brand famous. We rode our bikes back down the steep hillside, clutching our brakes fearfully, wishing we were going uphill instead of down. We returned later by car to  pick up the loot we had bought, certain of more memories as we opened the bottles, that hill now pleasant as we sipped the wines at home.

Several weeks ago we rode Westside coming south from Dry Creek and deep into it, well beyond Gary Farrell, after which the road is sparse. We turned back before reaching River Road hungry, tired and a bit heat struck as the afternoon sun seared on. I told my wife I had discovered a secret on this road which is alleged to have no food for sale anywhere. Hop Kiln, a scenic winery with an iconic building that features three prominent chimneys has a deli inside that I discovered while my group was tasting at Rochioli next door. We arrived at Hop Kiln at 3 p.m. to refuel. It was well air-conditioned and 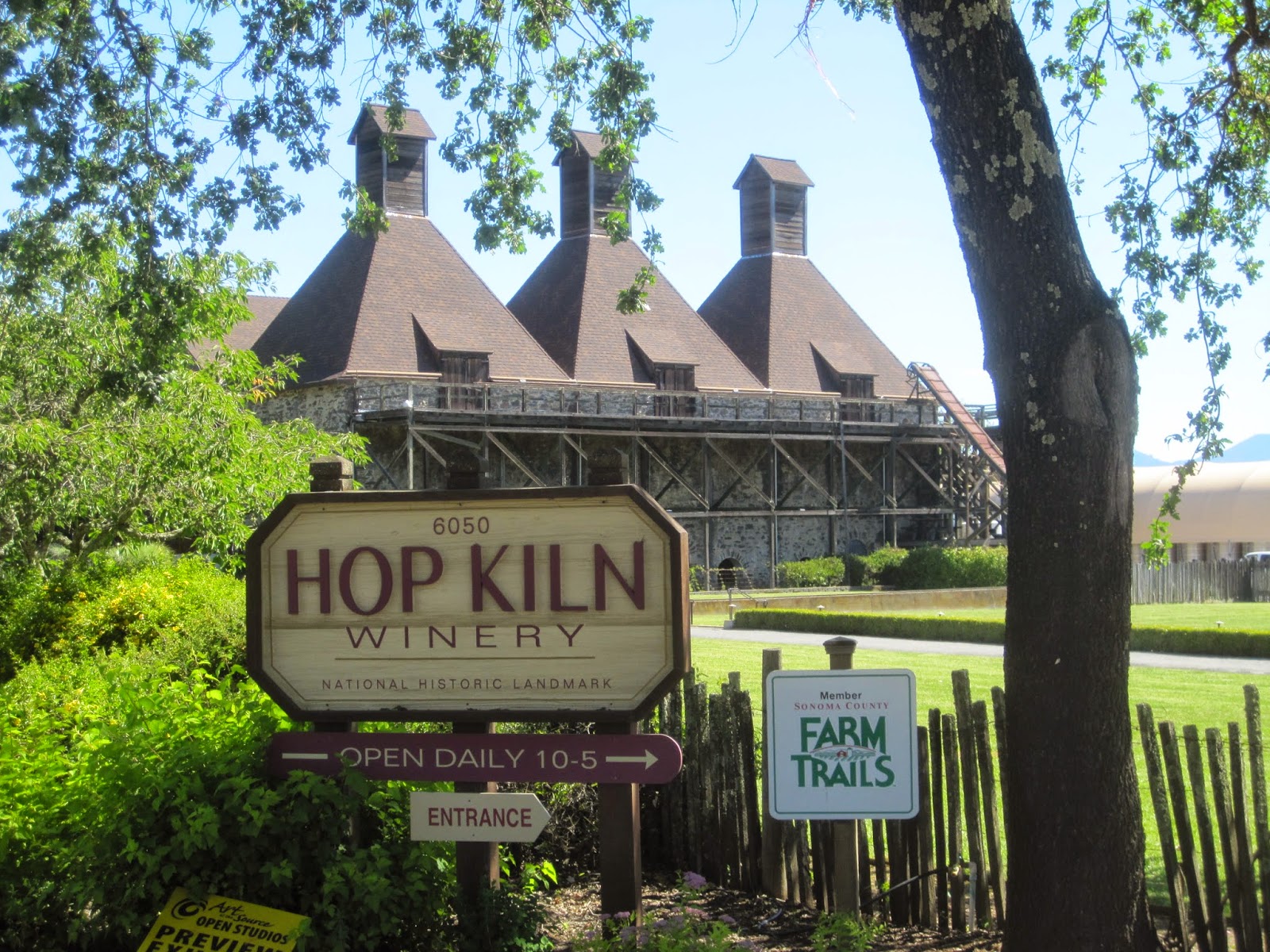 staffed with friendly servers. We bought coppa and toscana cold cuts, brie and a bottle of their Twin Corners pinot noir. They offered us freshly baked ciabbata bread. What a grand surprise! We had an indoor picnic, cooling off, filling up, drying our sweat, a mundane meal elsewhere supremely satisfying here.

Up north, Westside Road starts (or ends when we return) at a  three-way junction, one road forking up to the Dry Creek Valley, another into the heart of Healdsburg,. The third passes through an arched gateway into Madrona Manor, a stately B&B secluded in woodlands . It features a touch of the Eastern Seaboard architecturally, and an acclaimed restaurant, one of the best in the Bay Area. We ate 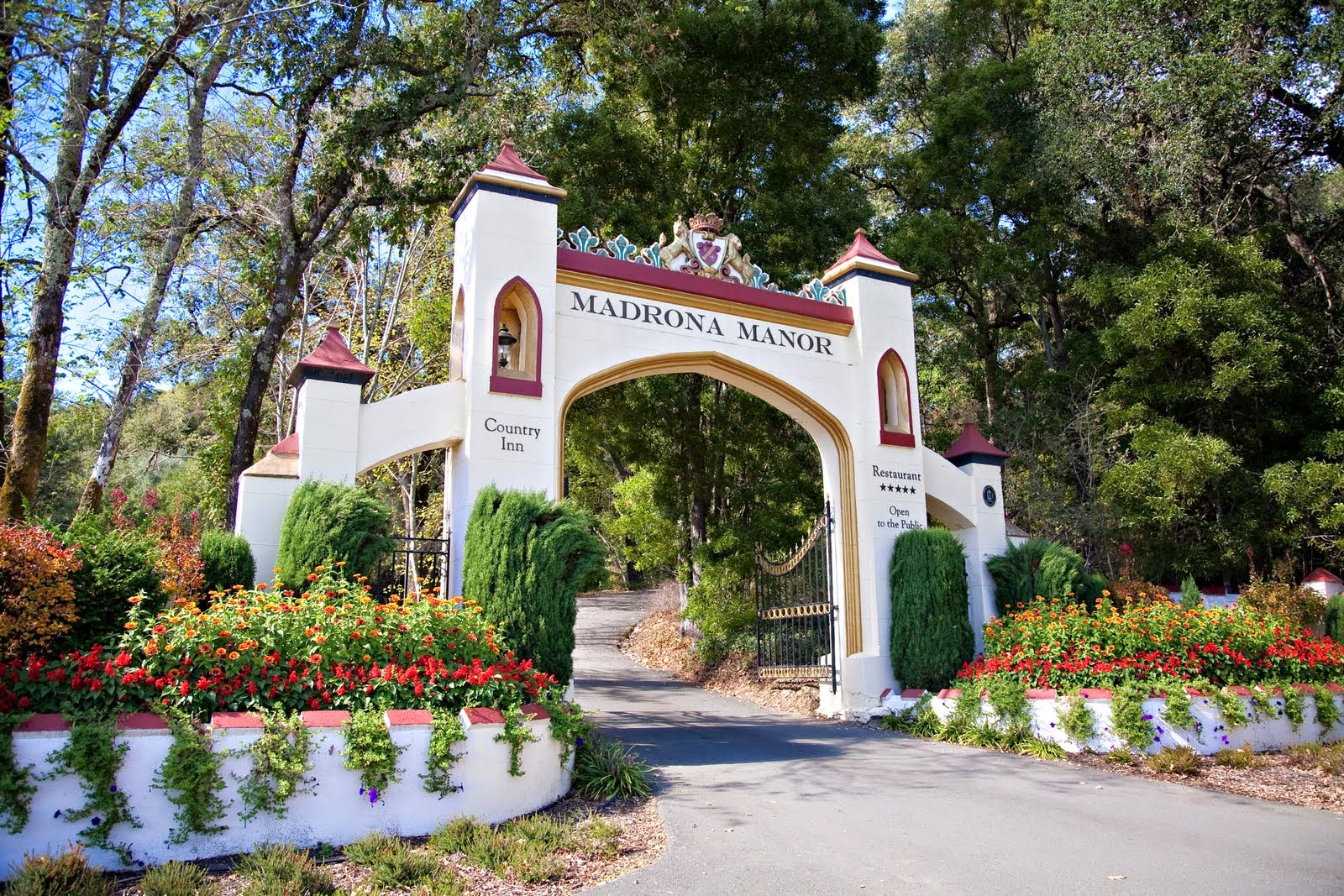 there in 2010 and have returned every year since, enjoying an elegant, high-end meal at prices more reasonable than similar establishments in Yountville or San Francisco. Madrona Manor is a fitting grand-coda to the Westside Road experience, usually after shedding our bike clothes for fancier wear, and waiting until after sunset, preferably 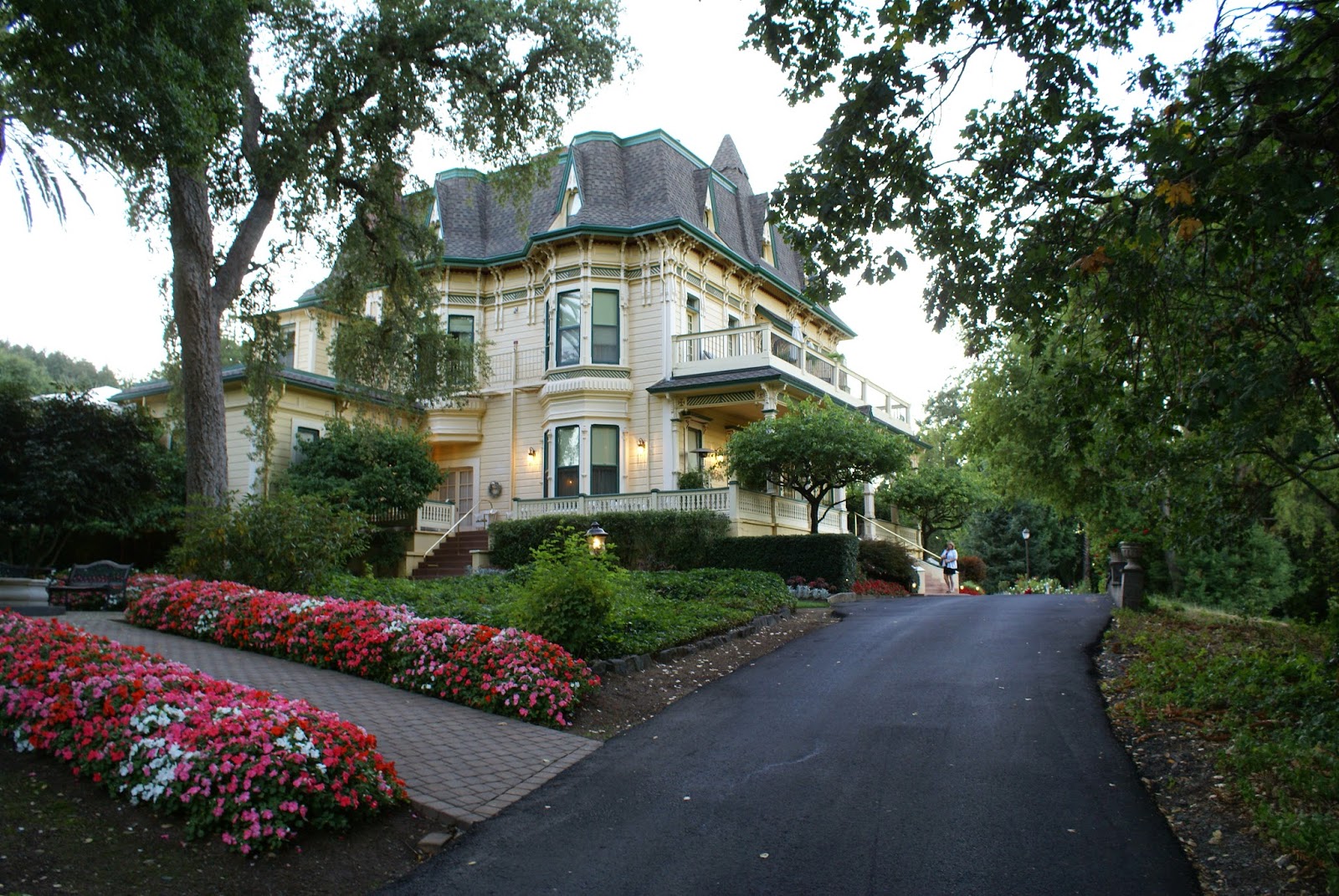 dining au-plain-air in their spacious porch redolent of the elegant South.The details of this meal could be another blog.

There are many storied wine trails in California. We have seen some and not others. Westside Road is our personal favorite, scenic, charming and full of fresh adventure.