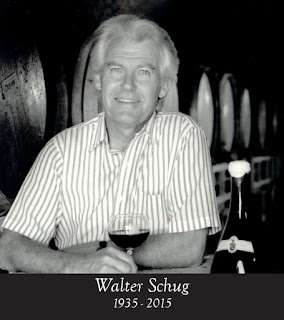 I just found out that Walter Schug passed away on October 10th. The news did not make any headlines. My friend Archie Steele, who just visited his winery in Carneros texted me. Schug was one of a multitude of hard working, devoted pioneers of the Napa Valley who shunned the limelight and sought to make good wine, in the process expanding the wine horizons  of the region.

Schug’s winery, at the cross-roads between the Carneros Highway and Highway 12 on the way to Sonoma, was a humble affair with a small, unassuming, friendly tasting room that reflected his own personal style. He made good Pinot Noir at reasonable prices long before Pinot Noir became hip. Meeting him, one would not know what a giant he was in the wine world. I met him in 2008.

It was at a December event called Winter in Carneros. My friend Archie and his wife Alice, the same ones who reported Schug’s death to me, invited us to come along. It is a two day affair where various Carneros wineries open their entire facilities (not just the tasting rooms), and serve food and wine to participants who show up with empty wine glasses. It was the only time I saw the Schug winery beyond its tiny tasting room.

There, in the depths of its barrel room, among various tasting stations, I struck a conversation with a tall, lanky, white haired pourer whom I assumed was a temporary hire, most likely retired, helping out with the event. He had a bit of an accent. After sampling a Schug late harvest Riesling,  we engaged in a spirited conversation about German whites. He was quite knowledgeable and seemed impressed with mine.

Fairly tipsy, I noticed large format bottles adorning some nearby barrel tops I inquired about a 3 liter Pinot Noir and soon I was buying one, a 2003. We proceeded to the main tasting room, crowded shoulder-to-shoulder, and the man asked that the bottle be brought to me. It had no label. He motioned someone and asked me to wait. By then my wife, Archie and Alice joined me. I told them I was buying a 3 liter. We all waited, with the white haired man at our side. When the newly printed label arrived the man motioned for a pen and proceeded to sign my bottle. 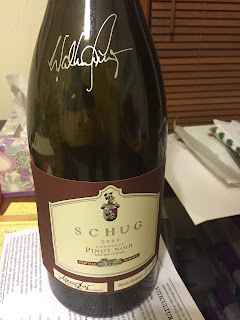 I was puzzled. “Why is this guy signing my bottle?” I asked, real loud. My wife, Archie and Alice and the man all smiled. Archie said, “That’s Mr. Schug, didn’t you know?”

“Oh, no!” I said, turning to the man, “I thought you were a minimum wage weekend hire for this affair.” That’s the impression he had given.

We all got a good laugh. Mrs. Schug, a white haired, stocky woman reminiscent of Mrs. Santa Clause, also joined us and I took a group photo with the couple, my new bottle cradled in my arms. Alas, that photo is now lost.

Walter Schug was born in 1935 on the grounds of Staatsweingut Assmannhausen, Germany’s top Pinot Noir estate, his father a manager there. He was destined for wine-making, Pinot Noir already in his DNA. After a prestigious German wine education, he emigrated to the U.S. in the 1960’s and worked first for Gallo, then for Joseph Phelps in Napa, where, as a winemaker, he launched Insignia, the first proprietary Bordeaux blend from the region, nowadays still a much celebrated wine.Schug was also a pioneer in dessert wines, and produced the first domestic bottling of single varietal Syrah. But his inner drive was geared to  Pinot Noir, in those days a tough nut to crack.

After some work with the grape at Phelps, in 1980, he struck out on his own in Carneros, one of the first regions to successfully break the Pinot Noir conundrum. He then stayed there for many decades, an unassuming man, working in an unassuming winery, making good wine day in and day out.

We opened  that 2003 3 liter in 2012. It had a Burgundian terroir nose and a light structure, a bit rustic, but true to the grape nonetheless. Archie and Alice were there, as were many others, the occasion turning into a party on account of the bottle. I told everyone the story of my encounter with the humble German and we all laughed. I bought more 3 liters from Schug after the first, and I gifted some to others. 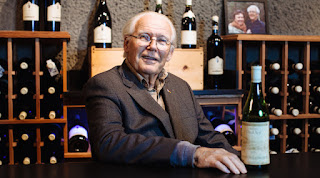 Walter Schug was 80 years old when he passed away. He lived a good life and made a major contribution to California wine. He never sought widespread notoriety and was satisfied with well earned respect  from his peers, as well as his successful winery.  As we toast Schug, preferably with a glass of Pinot Noir, let us recall that it is folks like him, rather than those populating covers of wine magazines, that turned Napa into what it is nowadays.