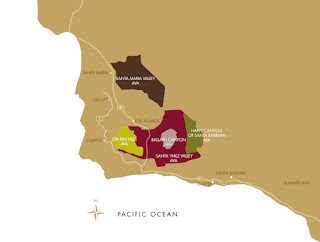 Thirty miles north-east of the scenic seaside town of Santa Barbara there lies a vast wine country made famous by the 2004 movie Sideways.

Stretching along both sides of Highway 101 its three main appellations form a triangle, the Santa Maria Valley at its apex, and fifty miles south, Santa Ynez Valley and Santa Rita Hills  at its base. Recently two more appellations have been created in the southern sector along the base, Ballard Canyon and Happy Canyon. The area has become especially well known for its pinot noirs, again thanks to Sideways. In a recent visit to the southern sector, one that barely scratched the surface, I formed some first impression. 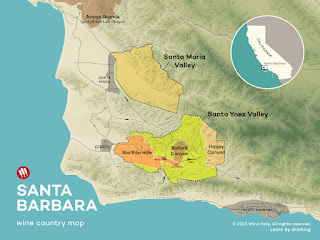 This area shares a common topography with other pinor noir nurturing climates in California, one that is essential for this cool weather grape. In north to south order, Russian River, Carneros, Santa Lucia Highlands, Edna Valley, Santa Maria and Santa Rita Hills, all  receive cool breezes and fog coming far inland from the Pacific Ocean, because of east-west oriented valleys that suck these up.  Carneros is the only exception, its access to the ocean being direct, via the San Francisco Bay.

I have been drinking pinot noir from the Santa Barbara wine country for years and have been particularly impressed with the output from Santa Rita Hills.It was thus with much enthusiasm that I undertook my virgin journey to this country. 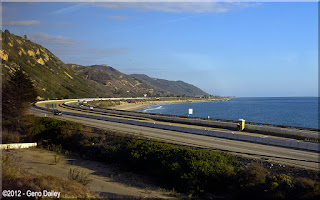 Leaving Santa Barbara north-bound, Highway 101 is a scenic ocean-side road up to a certain point when it sharply turns inland, passes through a short tunnel under rugged hills that descend to the water and soon reaches its first exit of the wine country, Santa Rosa Road. 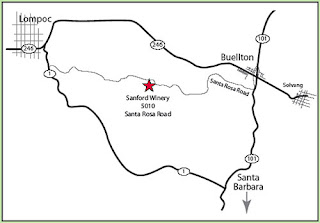 Heading west on this road, we were in the southern part of Santa Rita Hills, and it was definitely not Napa, Sonoma or Russian River. It is mostly barren, wild country, with rolling hills, patchy vineyards and an occasional winery here and there. 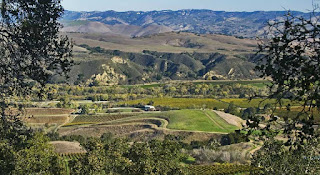 Our first stop, Lafond Winery featured chardonnay, Rhone mixes and various pinot noirs. They were elegant wines, fruit forward with hints of cherry and blackberry, slightly rough in mid palate and variable acidity. Burgundy clones are popular provenances in this region, and labels such as Pommard Clone, 667 Clone and 828 Clone, were still novel at Lafond (as our trip progressed they would become annoyingly ubiquitous). Most bottles at Lafond hovered around a $50 price point. 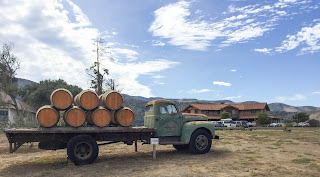 Farther down the same road, amid nearly desolate countryside, we found  the one that started it all, Sanford. Richard Sanford must have been considered insane in 1971 when he set out to produce pinot noir, then an impossible grape, in this God-forsaken stretch of land. Thirty-three years later Miles and Jack honored him in the movie Sideways by paying his winery their first visit. By now Sanford was an icon in the region. The result, another decade later, is a fancy tasting room that replaced the rustic one in the movie and a $68 Sanford & Benedict Pinot Noir, complex, fruit forward yet food friendly, elegant but too expensive.

Heading back on Santa Rosa road, we turned north toward tiny Buellton, then west along Highway 246 toward Lompoc, the northern part of the Santa Rita Hills loop. 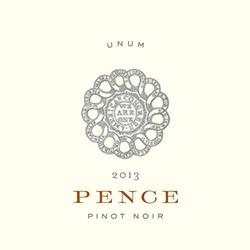 We first encountered Pence, a boutique winery, tasting by appointment only. We had none. They took us anyway and provided us with an attentive sit-down experience, formal but friendly, at no cost. We definitely were not in Napa or Sonoma. Emulating Burgundy, Pence only produces chardonnay and pinot noir. The pinots were the best of the day. They featured varying levels of extraction, with noses ranging from earthy to fruity and spicy, and styles that were true to the grape, delicate, feminine, and yet devoid of  blemishes  common in most French counterparts. Their Unum in particular was Burgundian, but better. At $56 per bottle it was expensive but we bought some. 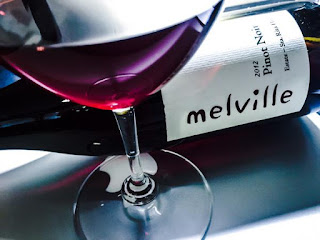 Next on this road was Foley, a well known winery. Their chardonnays were basically no good. Their two pinot noirs each $55 were very high extraction and syrah-like. Disappointed, we didn’t stay in their vast, elegant tasting room too long. Their nearby neighbor Melville turned out more rewarding. Featuring two pinot noirs: Verna’s at $28, and Estate at $36, Melville delivered quality at good value. The wines were delicate, well balanced and devoid of excesses common in this region. We bought some. 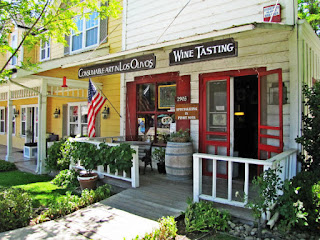 Backtracking across 101, we arrived at the tiny town of Los Olivos where Miles and Jack had dinner with their two ladies. It was here that Miles uttered his now historic line, “I am not drinking any fucking Merlot,” knocking this varietal out of its pedestal.  It is a quaint little town with only a few intersections and yet an overwhelming 35 tasting rooms, with some boutiques and restaurants in between. By now, despite late fall,  the afternoon temperatures were 90 degrees and above, the air humid. Weary with what we had already sampled, we only did a quick tasting at another icon of the region, Qupe, and we called it a day.

The majority of tastings in the area charged $10 (decent compared to Napa & Sonoma) and some refunded the charge with a purchase. The region was clearly not uppity, despite being touristy. For those visiting I would recommend at least three days to get the lay of the land. Before embarking on the trip I struggled with where to center it. Santa Barbara, as it turns out, was the best choice for us. It has better weather, a scenic seaside and good restaurants. Buellton and Solvang, inland and closer to the wineries, are other alternatives. Solvang in particular, is popular with many, given its charming Danish ambiance. 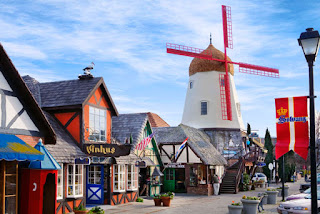 It takes several visits to get fully acquainted with a wine region. It took us five visits in four years to get a good grasp of the Sonoma sub-appellations around Healdsburg. The Santa Barbara wine country is likely to be similar. We look forward to further trips.

A REVELATION ABOUT PINOT NOIR GEOGRAPHY