VINTAGE CHARTS, HOW USEFUL ARE THEY? 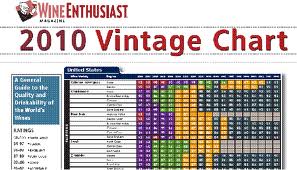 Yesterday, while tasting a 2008 Cotes du Rhone I mentioned to a novice fellow taster that this was a not so good year. “2002 and 2008 were bad years in the Southern Rhone”, I said. He soon whipped out his iPhone and double checked my proclamation with a free app he had installed from Wine Spectator. A few taps and he nodded with approval and looked back up at me, obviously impressed. “84 and 86 ratings for those years. You were right”, he said. I did not consider myself much of a genius, for after all from 1998 to 2010, the current release, there were only two bad years in the Rhone. Easy to remember.

My friend with the iPhone app then told me how useful he finds it to have a vintage chart at the tip of his fingers at all times. For instance, he recounted, he had a dilemma in choosing wine at a San Francisco restaurant recently, dining with a teetotaler wife. The waiter suggested a 2006 Bordeaux, half bottle, at a very reasonable price. He ordered it and it was wonderful. He then checked his iPhone app and to his surprise discovered that it was a bad vintage, less than 90 rating. He nonetheless thanked his lucky stars for the bargain he got.

“Well of course”, several of us chimed in, “in Bordeaux a bad vintage does not mean that the wine is bad. It simply means you have to drink it sooner, that it is not ageworthy. 2006 was a perfect vintage for that dinner, especially in a half bottle format where wines age faster.” Having thus been clued in to how Bordeaux vintages should be interpreted, he thanked us. But I wasn’t done. I had to add one more pet peeve of mine. I told him that at least he had not been subjected to the greatest sin restaurants exhibit with their wine lists, that of selling great vintages of Bordeaux too young, when they haven’t aged yet. All you get is a closed fruit bomb with no nuances, and you’ve just unloaded big bucks to experience a reference point from which you might hopefully extrapolate how  the wine might turn out when mature.

Here’s another story from the Wall Street Journal. A wine columnist writing about what sophisticated house guests should bring their hosts as a gift mentioned a certain Ms. Morrell of New York whose best such gift was a 1961 Chateau Latour (why don’t I have guests like that?), and the worst, 1977 Romanee Conti. The latter is a marquee name from Burgundy, a Rolls-Royce label. Why then was it so bad? Because 1977 was a bad year, and in Burgundy such vintages yield truly bad, undrinkable wines, regardless of who makes them, especially if they are subjected to much age. They thus differ from Bordeaux and this needs to be considered when evaluating Burgundy in vintage charts.

The charts themselves are quite interesting. Some come with “drink” versus “hold” ratings. Aimed at collectors, these are encrypted messages that carry various nuances. For instance a “drink” rating for a young vintage means it was a bad year; for an old vintage it simply meansthat  the wine is mature and ready. It takes a significant fund of wine knowledge to interpret these charts.

Then there are numerical ratings. I just love those based on a 100 scale, don’t you? Studying the Wine Spectator chart, I discovered the lowest rating for the worst year to be 83. Accustomed as we are from our school years when 80and up usually meant an A, I find the lack of 20’s, 30’s or even 60’s in such ratings quite interesting. It’s as though they are telling us all wine is “A-Grade”. Bullshit!

The most useful ones are the 1-5 ratings which usually come in color coded boxes. They are less disingenuous. Still, vintage chart ratings in and of themselves are of no use unless one can place them within a context, as my fellow wine tasting friend discovered last night.

IT IS CHINON WEATHER

COSTCO WINE; WHY NOT?