Introducing Turkish Wine Renaissance, the brochure said, referring to the world’s only wine exporting Muslim country as The Newest Oldest Wine Region. I was at Troya, my favorite Turkish restaurant in the swank Fillmore district of San Francisco, with Larry and Mariko Johansen, proprietors of Stockton’s Wine Wizard’s, for the first ever trade event staged in the City by the Turkish wine industry.

The fledgling  effort, hosted by a group of major Turkish producers, importers and San Francisco distributers, attracted much interest, tasters filling Troya shoulder to shoulder. It featured ten major producers representing all the wine regions of Turkey, with over fifty different labels.

A brief lecture opened the event, introducing  Turkish wines, while the owner of Troya, Berk Kınalılar served some of his best appetizers, lahmacun, muhammara, hummus, köfte, dolma, various salads, at his long bar. The speaker told us that wine has been produced in Anatolia since pre-historic times, passing from Hittites and Phyrigians to Greeks, Romans and Byzantines. During the long reign of the Islamic Ottoman Empire, despite the religious edict against alcohol consumption, wine production continued by Christian minorities who made up a considerable portion of the population. 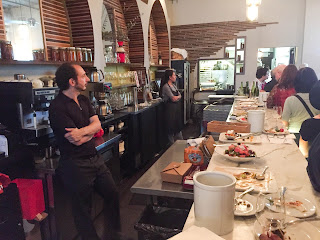 Berk, behind his bar at Troya
During the 19th century, as its newly modernized wine production peaked, Turkey provided voluminous exports to phylloxera afflicted Western Europe. The modern Turkish Republic, secular and more permissive of alcohol use, restricted wine sales mostly to Tekel, a government monopoly, although many private producers flourished.  It is with more recent de-regulation of alcohol sales that the Wine Renaissance boasted by the tasting brochure truly began. 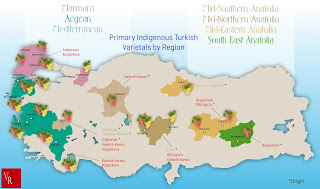 Turkish wine regions
Turkey is the sixth largest grape producer in the world but only 7% is used for wine, the rest consumed as table grapes. Domestic alcohol consumption is dominated by beer and rakı, the latter, a hard liquor similar to ouzo or pastisse. Recent statistics reflect wine production at  60 million liters (3.5 million cases), 4% of which is exported. There are a staggering number of different grape varietals, in excess of 1200, many indigenous, with Turkish names, others well known Western varietals.
Turkey has seven wine regions. Some, in Thrace and along the Anatolian shores have Mediterranean climates. Others, inland in Anatolia have harsh winters and hot summers. The diversity of soil and climate is then reflected in the country’s wine output. 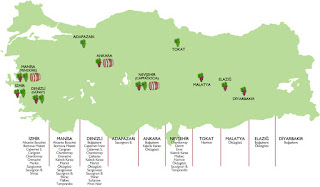 Production areas for Kavaklidere
Foremost among the offerings were wines of Kavaklıdere, Turkey’s largest producer. Founded in 1929 as Turkey’s first private winemaker, Kavaklıdere currently produces 20 million liters (1.2 million cases) per year, in 56 different labels from 7 appellations within the country. It is a major exporter, its Ancyra and Yakut wines already well represented in wine lists of U.S. Turkish restaurants. The pinot-noir-like Ancyra Kalecik Karası is already one of my favorites. 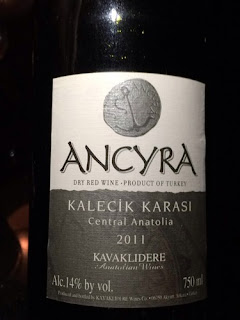 We were also taken by their Pendore label, two different, higher extraction, heavier reds made from the Boğazkere and Öküzgözü grapes. 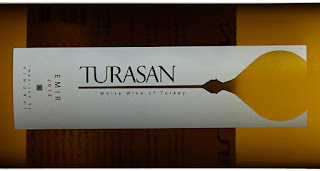 Another large producer Turasan is based in the scenic inland Anatolian region of Cappadocia. Its Emir wine, a pinot grigio-like, floral white, was a good bargain and a good drink. Turasan also offers an interesting Kalecik Karası, a spicy red wine, tannic and with hints of dry herb.
Lucien Arkas Wines, based near the Agean city of Izmir offered a number of European varietals such as Chardonnay, Sauvignon Blanc/Trebbiano mix, Cabernet Sauvignon and Merlot.  Named after another early private pioneer, this winemaker did not impress us with its products. 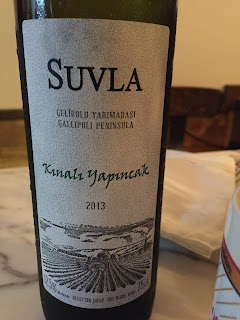 Our favorite white wine of the tasting came from Gallipoli, a 2103 Kınalı Yapıncak made of the Yapıncak grape.  Rich, aromatic and complex in flavor, it was redolent of Northern Italian whites from Alto Adige, currently much preferred.

Production areas for Sevilen
Other favorites were produced by the Sevilen group from the Agean, a three generation winemaking family that began with a Bulgarian immigrant patriarch in 1942. Currently they produce a plethora of different labels and varietals sourced from the Agean and Inland Anatolia, featuring both indigenous Turkish grapes and European ones. We loved its Sauvignon Blanc from the Menderes river valley near Izmir, a full bodied, Bordeaux style wine that gave a new expression to the grape without losing its essence. Its Centum Syrah from near Denizli, an inland Agean region, was very elegant, silky in texture, well extracted, beefy and with medium tannins. Larry commented that it featured the elegance of a Cotes Rotie. At $50 retail, it was also one of the priciest in the overall selection.

Well received by a crowd of wine merchants, sommeliers, wine writers and amateurs hangers-on such as I, Turkish wine is certain to re-appear in future tastings and more wine lists. Larry made note of a few for his wine shop.
The tasting, a successful splash for a start, left me proud of my country of birth, marveling at the diversity and quality of a product so unusual from the Muslim world. But then it is Turkey, a bridge between the East and West.