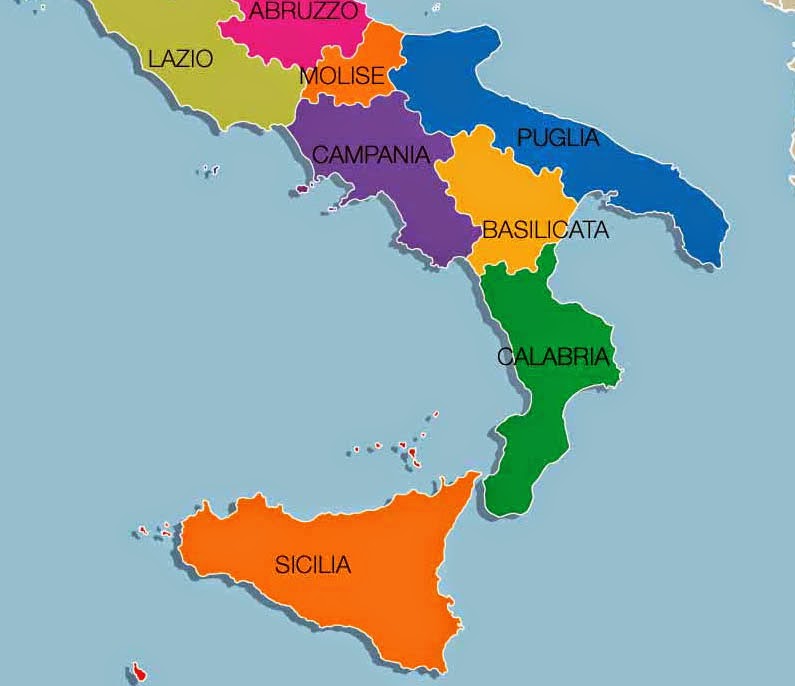 When it comes to Italy and wine, most think of the two famous Northern appellations of Tuscany, with its Sangiovese grape, and Piedmont, with its various versions of Nebiollo, and maybe Pinot Grigio.In fact all regions of Italy produce different wines and have their own unique profiles. Today I will focus on the Southernmost part of Italy for an overview, more details to come in future blogs.

First a brief geography lesson. On the map Italy looks like a boot kicking a ball. That ball is the island of Sicily (orange in the map above). The foot kicking the ball has three parts: the toe next to Sicily (green) is Calabria; the ankle and heel east on the Adriatic Sea is Puglia (blue) and, least known, the arch of the foot is Basilicata (yellow) also known as Lucania.

These are all traditional wine making regions where vinification has occurred since antiquity, especially in Sicily and Puglia. As I summarize these regions, I’ll try not to be encyclopedic, for if I do, no-one will remember anything amid the details.

Sicily has been historically known for the now defunct Marsala, its fortified white wine akin to Madeira or Sherry.  Nowadays, when we think of this island, the wine that comes to mind is Nero d’Avola, a fruity, syrah-like red grape that is king in the region. Various French varietals such as Cabarnet Sauvignon and Merlot are also being cultivated in the island. The whites are lesser known and include Grillo, Inziola and Cataratto. The wine industry in Sicily is vibrant, innovative and increasingly recognized, Nero d’Avola fetching ever rising prices in Bay Area restaurant wine lists.

By contrast, Calabria, another historical wine-making region, remains far behind. A rural area with a chronically depressed economy, Calabria has seen mass emigration to the New World. Its wine industry has never quite recovered from the phylloxera epidemic of the past century and the more recent rise of other wine making regions both within and outside Italy. Its best known appellation is Ciro, 90% of its grape production is red, most shipped north in bulk for blending. Its best known varietals are Gagliopo and Greco Nero, both reds.

Basilicata is another economically challenged region, mountainous and arid. It contributes a small fraction to the overall wine production of Italy, mostly in Vino di Tavola (table wines). In a recent visit to this region however, we were surprised to discover very good Aglianico  wines, the main red grape of the region, better known in its home farther west in Lazio and Campagnia. An extinct volcano north of the region, Monte Vulture, with its fertile soil, provides the best home for this wine, and is one of only four appellations in Basilicata. We also drank good Primitivo reds in Matera, the southeastern, hilly town we visited there, famous for its cave dwellings.

Puglia, an agriculturally rich land, especially in olives and grapevines provides Italy with half its olive oil and around 17% of its wine. Once a center of bulk production with significant exports north to be made into Vermouth, this region has changed with the times, producing, among others, fine Negroamaro, Primitivo and Nero di Troia reds, Bombino, Malvasia and Chardonnay whites. In a recent visit there I was particularly struck by the prevalence of one appellation in shops and wine lists, Salento, the peninsula that forms the heel of Italy.

The wines of Southernmost Italy are, by-and-large, easygoing, buy-now-drink-now, non-ceremonial drinks, affordable, easy on the palate, sip and food friendly, and like their home regions, devoid of airs or pretensions. For those tired of their regular wine-rut, whatever this may be, these off-the-beaten path wines are  good antidotes. For those fortunate enough to have ventured to these regions, as I have to Sicily, Basilicata and Puglia, they are also pleasant reminders of memories to be relived with every bottle uncorked.