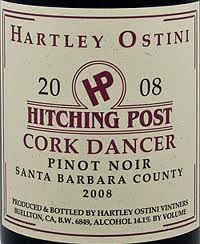 My European readers may not know that the movie Sideways (2004) singlehandedly altered the wine market in the United States, a fact most of us domestic wine drinkers now take for granted. Its most dramatic effect was the elevation of pinot noir’s popularity. This fickle grape of Burgundy, which had previously been so difficult to cultivate in U.S. soil, and was beginning to make headway among mainly Burgundy affocionados, suddenly catapulted into the “A-list” of varietals to consume along with such better established partners as Cabarnet Sauvignon, and its white Burgundian sister Chardonnay.

Along with this largely positive development came a noticable increase in the price of domestic pinot  noir.  This was especially prominent in restaurant wine lists which began featuring extended pinot noir lists at ridiculous prices. A case in point  is one we visited in San Francisco last night called First Crush. Located near Union Square this restaurant, named after an oenological term,  gets prominent mention in the magazine Wine Spectator as having an exceptionally wine friendly menu and interesting list.

What we found was indeed a very interesting list, all domestic, with three featured wineries (including the ultra hip Williams Selyem), numerous adventurous varietals (like domestic mouvedre or vermentino), and -you guessed it – an extensive pinot noir list mostly from Central Coast and Russian River. The prices were outrageous; very few below $50 per bottle.

I ended up choosing the label you see above which was around $40 per bottle (it retails for $28). The Hitching Post is a restaurant in Buelton which was also prominently featured in the movie Sideways. That’s where the hero Miles hits upon his eventual love interest Maya, who works there as a waitress. It turns out they are both wine snobs. It also turns out that the real life owner/chef of the Hitching Post Frank Ostini produces wine with a fishing buddy of his named Hartley. There you have it.

Nowadays most pinot noir makers feature various different styles in the their line up, some from special vineyards, others mixes. They also produce Burgundian style pinots, with leaner fruit, higher acid, and less alcohol, and New World styles with bolder fruit, higher oak, and higher alcohol. This “Cork Dancer”, the bottle I ordered  was definitely Burgundian. On first tasting with a food free palate, it gave a lean impression and the acid was quite noticeable. But with the food which subsequently came it worked quite well.

Here’s the catch: it was the cheapest pinot on their wine list!

Supply and demand being what it is, there is lesser demand for such Burgundian styles among American consumers, hence the low price. The irony is that those big, high extraction, syrah-like pinots which make such an impression upon first tasting don’t work well with food. The food just brings out the excess in their oak and alcohol, makes them taste out of balance. They work better as sipping wines.

Years ago as chardonnay crested in popularity and the anti-chardonnay movement took off, I read a slogan somewhere that I took to heart and repeated often: “if you absolutely have to drink chardonnay, drink the cheap stuff.” This was because the cheaper ones, less adulterated by the numerous processing tricks of their makers remained more true to the grape, and more food friendly. While pinot noir is not quite there, I can now safely declare a similar corollary to the slogan: “if you absolutely need to order pinot noir in a Bay Area restaurant, order the cheap stuff”.