THE STINK IN “SPECIAL” 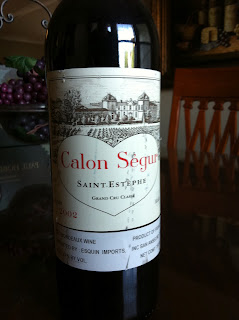 For those of us lucky enough to experience excellent fine wine regularly, the issue of what to do on ceremonial occasions becomes a problem. I have recently had two experiences that gave me new insight into this.

The first was a dinner in honor of my wife’s birthday at a fancy local French restaurant with one other couple. I decided to bring my own bottle to the occasion and chose the above label, a Chateau Calon Segur from Sait Estephe, Bordeaux. Usually a solid and reliable performer, this label turned out to be absolutely wrong for the occasion. The problem was  its vintage, 2002. It was simply too young and too tight. I asked that it be decanted and it was. The very last sip from the decanter was the only one that was any good, and the bottle was essentially wasted.

In our most recent Friday night tasting another ceremonial occasion arose. Todd Stanfield who used to be a member of our group, and  a UC Davis trained wine professional, was to visit us from Sonoma with a new bride. A buzz went around our group days before the tasting, and everyone told each other that we should bring a special bottle in his honor. Usually we do not engage in any advance themes for our tastings and prefer to keep them totally random.

Todd did arrive, and brought us an excellent Champagne in magnum format, as well as a Chablis Monte de Tonnerre for the blind tasting which we all liked. However the remainder of the tasting, which consisted of nine bottles was largely  disappointing. Included were such heavy hitters as a 1996 Hermitage from Chave (unbalanced too acidic), 1995 Rauzan Gasseis (2nd growth Bordeaux from a good vintage, unbalanced), 2003 Du Mol Syrah from Russian River (overcooked, over alcoholed), 1993 Domaine de Villeneuve Chateauneuf du Pape (absolutely awful wine that bore no resemblance to its terroir),  and a 2005 Chateau Lagrange (3rd growth from Maragux, like my Calon Segur, too young).

It seemed that the harder we tried for a special experience, the worse was the result. If we had done our usual routine and brought random bottles we would have had a better tasting. The unpredictability of wine usually adds variety and excitement to its experience. But on the two occasions I just described, it  contributed to letdowns. I think from now on I will try to “relax” on the eve of ceremonial occasions and not try too hard for something the special. The usual might do just fine.

HOME AND AWAY IN WHITE

VINTAGE CHARTS, HOW USEFUL ARE THEY?