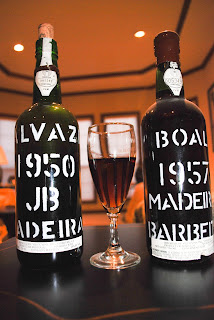 Among wine connoisseurs the issue of what to drink to celebrate one’s birthday is a special problem. I suppose some just open an expensive or celebrated bottle of this or that which suits their fancy. Among my wine drinking friends the most coveted bottle on such occasions is one that belongs to their birth year. As you might imagine, with advancing age finding available bottles of what is becoming as much “vintage” as yourself gets to be progressively problematic. My good friend the late John Morozumi, born in 1924, from time to time was able to procure his birth year wines as late as the 1990’s. I remember a Bordeaux which we tasted in 1995, and a really memorable Sauternes which came along around 1998. The latter, supposedly a sweet dessert wine, had lost all its sugar through the seventy-plus years, but was still drinkable. What we tasted was its “skeleton”, all its meat gone.

Inspired by John I went on a quest for wines from my own birth year, 1956. Imagine my unpleasant surprise when I discovered that 1956 was an all around horrible vintage all over the world. There is no wine available from this vintage anywhere. Fit to be tied, and about to enter analysis to cope this discovery, I set out to rectify the problem with a suitable alternative. I settled on Madeira.

A fortified Portugese wine made in the Madeira Islands in the Atlantic, offshore from North Africa, Madeira used to be the “chardonnay” of Colonial America, the most popular wine consumed by the likes of Washington, Hancock, Jefferson  etc. It has since fallen into a well hidden niche status, pursued by a select few. Our current palates have been reoriented towards dry, fruity wines, with Madeira now relegated into “aperitif” or “dessert” status.

There are four varietals of Madeira: Sercial, Verdelho, Bual and Malvasia. They all feature nutty noses (as in “almonds”, not “insane”) and flavors, and a well balanced mixture of sweet and acid. They are not overly sweet wines a la “late harvest” dessert drinks. Being fortified, and therefore high in alcohol, they can only be consumed in small quantities.

What makes Madeira an ideal birthday wine is not any of the above; it is the unique survival ability the wine displays. Madeira can be opened, sampled, re corked  and kept for future occasions over many years without spoiling. Try doing that with Cabarnet! Thus a given bottle can last over several birthdays if consumed economically on each occasion. I have no trouble with such economy because aside from my friend Archie, no one is terribly interested in sharing a glass of old Madeira with me. Typically a given bottle lasts me 4 birthdays.

Madeira is available from unbelievably old years. The oldest one I have tasted was from  1795 (communally tatsed by our wine group in the late 1990’s). Such wines are curiosity items and are  quite expensive. Currently the Rare Wine Company of Sonoma, a major seller in this market, features an 1810 Sercial for $1750. By contrast a 1910 is a mere $375. And that 1795 Terrantez is now $4500 (Wow! We had collectively purchased this one for $800 in the late ’90’s). The special pleasure of consuming these is the knowledge that what is swirling inside your mouth is the oldest possible “produce” one can ingest, not to mention that Napoleon Bonaparte was wreaking havoc in Europe when the wine was made.

These ultra-old wines aside, about a decade ago I found some 1957’s at Rare Wine that were reasonably priced, and bought a whole bunch. After all I was born on Christmas day 1956, only a few days shy of 1957. At the time these were around $80 per bottle; now they’re all gone. At one time their price had  risen to over $150 before they disappeared. Currently I am drinking a 1950 bottle I also happened to snag, which you see to the left in the photo. Yesterday was my second birthday for this one, and it looks like it will last me longer than the usual four.

I drank a small aperitif glass size of it by myself, in between various holiday gatherings. It was a quiet contemplative moment, about 3 sips. The wine was nutty as usual, with a hint of apricots in the upfront palate, and the usual long, slightly bitter but mostly acidic follow through. Definitely an acquired taste. I swallowed and congratulated myself for getting through another year lived to the fullest.