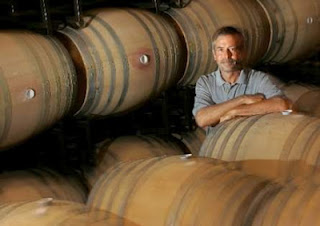 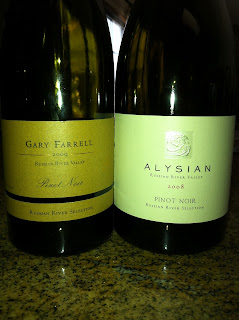 Celebrities no longer inhabit the world of sports and movies. The restaurant business has spawned quite a few, and now in our wine-growing corner of the world various winemakers have assumed this role. One of them if Gary Farrell, seen in the above photo. For aficionados of California Pinot Noir, he is a well known name, and his career has risen in concert with that of the varietal. His story begs the question: how valuable is a name?

As a young winemaker Farrell was mentored by the likes of Rocchioli, Bynum and Dehlinger, Russian River pinot noir pioneers who in the 1980’s were engaged in a seemingly Quixotic  mission to cultivate this finicky grape in what was then an unknown backwater of Northern California. Well, they succeeded and all achieved respect. In the meanwhile Farrell struck out on his own and received accolades immediately for his 1982 pinot. Like his fellow Russian River brethren and others in Carneros and the Central Coast, he toiled for year, and gradually built an ever enlarging  following as the grape became more popular.

In 1998 he opened a hilltop winery on Westside Road, southwest of Healdsburg. By now he was a major player in the pinot noir world. This winery is worth a visit, if not for any other reason, to take in the view from its high perch.

By 2004, now in his early fifties Farrell was ready to cash out. He sold his winery and his namesake to Allied Domenq, a global wine and liquor conglomerate which features Beefeater gin, Maker’s Mark whiskey, Perrier-Jouet and Mumm champagnes among others in its vast line-up. His subsequent stint as a consultant for his own winery didn’t last long. In 2006 he left as the winery changed hands, and was to do so several times more. He no longer owned his own name.

Continuing what he does best, in 2007 Farrell partnered with two old acquaintances and began producing a new pinot noir not too far away on Westside Road, closer to Healdsburg under the Alysian label. His name is nowhere to be found on the bottle. Wine shops which sell the wine however, make sure their clientele know he is involved with it. In the meanwhile the Gary Farrell winery has VinCraft as its latest owner. This is a boutique investment outfit, Sonoma based, which is buying and managing  limited production wineries with famous labels. Their other marquee labels include Kosta Browne, Kistler and Stag’s Leap.

I recently decided to compare the Gary Farrell pinot noir, made under VinCraft management, with Alysian, Farrell’s new venture. They retail roughly at the same near $40 price point. I slipped a bottle of each back to back into our Friday night wine group blind tasting and asked for feedback. Both were basic Russian River pinot’s, not special vineyards. The Alysian (2008) was leaner, high in alcohol and featured a distinctly spicy finish. The Gary Farrell (2009) was lush, higher in extraction, well balanced, smooth and elegant. The vote was 9 to 1 in favor of the Gary Farrell. Mind you, they had no idea what they were tasting and discovered my theme after the bottles were uncovered.

It thus appears that Farrell’s winery is doing just fine without him while his new wine, based on my small sampling, while good, still  needs some refinement. Was it worth his while to give up both his winery and his name? Only Farrell knows the answer to that. After all why not cash out in middle age and receive a financial reward for your life’s work? Losing the winery doesn’t seem as tough; you can always start over, as he has done. But giving up the right to his name? I don’t know about that one.