THE FRUITS OF APPELLATION PROLIFERATION; PART I 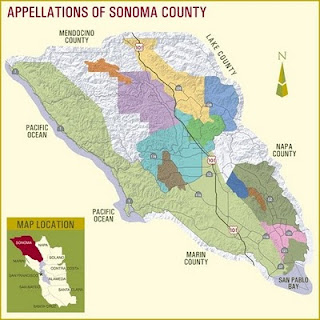 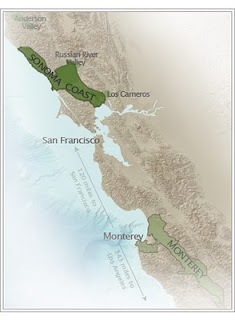 The San Francisco Chronicle just published a long article about efforts to break up the Sonoma Coast Appellation into regions that make more sense. The area designated as “Sonoma Coast” can be seen on the larger California map to the right. If you look within the various appellations of Sonoma itself (map on left), you’ll notice that “Sonoma Coast” is by far the largest. Furthermore, even though it has the name “Coast” on its label, more of it is inland than coastal. Apparently some vintners want to create a new designation, “West Sonoma Coast” to break-off the truly coastal regions from the inland sector. As with any such relining of boundaries, opposition is stiff.
What’s this all about and why? In the past I have written blogs railing against what I have called “appellation proliferation”, and here I go again. An appellation, formally known as AVA (American Viticultural Area) is a distinct geographic region recognized as such by the U.S. Government as having unique properties for its wine products. It is modeled after European A.O.C. or A.O.D.C. designations of France and Italy (as an example), where appellations such as Burgundy, Bordeaux and sub-appellations within them have been designated and etched in stone for centuries. The U.S., currently expanding rapidly in wine production, seems to be experiencing some growing pains in this area. There are numerous attempts to create new appellations or revise existing ones.
Currently the U.S. has 193 appellations, of which 110 are in California. The key rule is that once an appellation has been designated by the TTB (it used to be the BATF), of the U.S. Treasury Department, 85% of the grapes within that label have to come from that region. Thus an appellation is nothing but a trademark, a way for certain producers to distinguish themselves from others, and thus allow ease in marketing. It therefore will come as no surprise to anyone that “appellation wars” raging within the vast bureaucracy of our government are instigated by certain wineries and opposed by their competitors. The government acts merely as a referee.
In the case of Sonoma Coast, the peculiar map was designated to fit the vineyard holdings of Sonoma-Cutrer, a large 80,000 case industrial producer. The inland portions reflect the so-called Petaluma Gap, through which coastal climate affects non-coastal land. Instigators of revision correctly argue that there are numerous other variations within the vast appellation, most notably elevation, which are as important in creating variation in grapes and wine styles, and that therefore the region should be subdivided in a way that makes geographic sense. These instigators include coastal wineries which have achieved fame surpassing others, such as Kistler or Hirsch. They now want to elevate themselves above the fray, or put another way, separate themselves from the chaff, by isolating themselves within smaller, more distinct appellations.
The current fight within Sonoma Coast is all the more important because the trademark has stuck. In other words consumers have actually recognized this designation as a trademark, and are willing to pay a higher price for it. This cannot be said for countless others within the 110 California designations. The obscure ones, such as Pacheco Pass, York Mountain, or Salado Creek, don’t have to worry about any wars within them, for there’s no profit to be gained from the fuss. As for Sonoma Coast, we’ll stayed tuned and watch what happens. I predict it will indeed split up into regions that make more sense.
What does this all mean to us wine consumers? I will reflect upon this in a future posting.