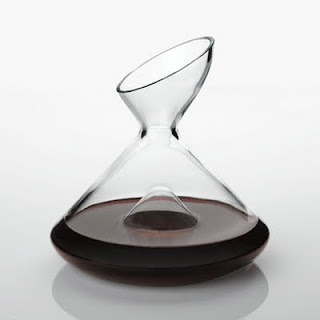 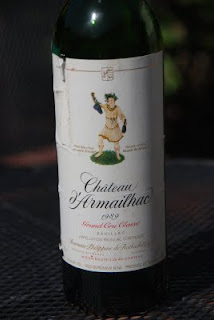 Last night I brought the bottle in the photo to our regular Friday night wine tasting. It was a 1989 Chateau d”Armailhac, a reliable Bordeaux producer, from a good year.

The way our tastings go, we each bring a bottle or two concealed in bags, we open them all and set them at a table. We then make our rounds tasting them in the order of whites first, light reds next and heavy reds last. Bordeaux invariably come at the end of the tasting. We comment on each wine and play a game of guessing what the wine is.
Excited by the prospect of a good bottle, I took a quick initial taste of the d”Armailhac immediately upon opening it. It was indeed wonderful. Great Bordeaux nose, powerful upfront fruit, good finish. The wine tasted younger than its age. By the time we came around to communally tasting it, some 60 minutes later, the wine that poured out of the same bottle was completely different. We now had a tired, over the hill wine, with faded fruit, out of balance acidity, and unpleasant hints of stemminess. No one liked it.
What happened here was the classic decanting effect of the bottle sitting open to air for all that time.
Many are enamored with the act of decanting for various reasons. The most common and frivolous of them all is the ceremonial nature of it. Decanters come in all sizes and eye pleasing shapes, and pouring a wine into them and distributing into glasses thereafter seems to add a certain panache to the tasting experience. Some restaurants automatically decant everything ordered, others reserve the ceremony only for the more expensive bottles, to give their spendthrift clients a show for their money. But this all occurs at the risk of losing the wine.
Decanting only achieves one goal, that of oxidizing the wine. Most decanters come with shapes that allow maximum wine surface in contact with air. Rapid oxidation of wine is a way of aging it, in fast-forward mode, if you will. Therefore the younger the wine, the more it can withstand the corrosive effects of oxygen. In fact some really young wines full of piss and vinegar could stand decanting for several hours to soften them up a bit.
But exposing an old wine to air for any prolonged period of time is the equivalent of firing a bullet into it and watching it die right in front of your eyes. I have had this experience most remarkably with 40-plus year old labels, say 1961 Bordeaux. The differences between the first sip at time zero, versus the second at 10 minutes, and a third at 20 minutes can be a world apart, and give you the taste equivalent of rapid death evolving in your mouth. What happened to my 1989 bottle, now 22 years old was just that, even though it was not decanted and it’s surface exposure to air was limited. These wines can be that delicate.
A few weeks ago my brother in Seattle opened us a 1994 Joseph Phelps Insignia Magnum in a Seattle restaurant. For those of you who don’t know the label, it”s a heavy hitter Cabarnet Sauvignon from Napa which fetches an obscene price at this age, in this format. The wine was decanted and sat at our table among a few slow sippers. It was wonderful at first. It took around 90 minutes for it to die. But die it did, slowly and painfully, and I tasted each gasping breath that Insignia took, warning my table-mates to finish it off before the rest was wasted.
Many wine pundits recommend that you can safely decant anything. I say, “watch out”. If you want the equivalent of a decanting experience without risking the whole bottle, you can simply pour yourself some into a glass and let it sit there a while. You can then judge how much oxygen exposure the wine can withstand. And if you are one of those suckers for ceremony who adore the glass work, artistry and choreography of the process, I suggest you stick to younger bottles.