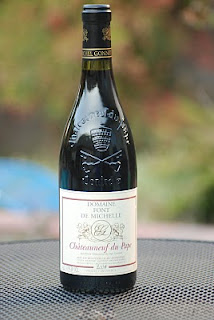 In a recent tasting the bottle you see in the photo, when opened, raised a question as to whether the wine inside was “dumb”!

The bottle is a 2004 Chateauneuf du Pape, Font de Michelle, a producer I usually like. ’04 was a good year, age worthy. When I came across this label in a San Francisco wine shop at a surprisingly cheap price recently, I bought a whole case. I figured it might be a close-out sale for a vintage that should, by now have been off the shelves. I was then alarmed when, upon opening the first bottle, my fellow blind-tasters seemed to think that there was something “off” about the wine; the nose was strange, the wine was out of balance with the fruit fading out too fast, giving way to too much tannin and acid. It seemed over the hill. Or was it? Could it be that the wine had entered what, in wine parlance is known as a “dumb phase”?

This concept can be defined as a transitional period in which a wine loses its youthful characteristics, and before it assumes agreeable maturity, goes through a period when it just doesn’t taste right. The classic wines that regularly go through such phases are Bordeaux. Most collectors know that ultra-young Bordeaux are too “tight”, mid-range go through a “dumb phase”. They are ready to drink only when they become mature. Naturally the critical question is the exact timing of these phases. There is so much variability from vintage to vintage, region to region, and even bottle to bottle, that the issue cannot be resolved with one or two tastings. One has to taste multiple versions of the same wine over a long period of time and determine the answer with the perspective gained.

My wine mentor, the late John Morozumi had a story he told often. Early in his collecting experience he bought a case of expensive Bordeaux, only to discover that every time he opened a bottle it was “crap”. He kept slowly going through the case through the years, each time more disappointed than before. Eventually when he got to the final bottle, to his amazement, and utter disappointment, the wine was wonderful. It had finally matured. But there was none left to enjoy. He told this anecdote as a parable for us young collectors, injecting caution into our corkscrew-trigger-happy ways.

I lived through my first experience with the same phenomenon with a case of 1998 Chambolle Musigny, a Burgundy, by a producer we much respect named Berthau. This is pinot noir. Chambolle has a more fruit-forward style than most other Burgundy appellations, pleasing to our domestic palates. It tends to be expensive; in fact, no one in our group, myself included, is buying it any more. But a decade ago it was still affordable, and on an impulse I bought a case. Every time I opened one, my fellow tasters commented on how thin, simple and unsatisfactory the wine was. Unlike Morozumi, I lucked out. It matured at a time when I had about 4 bottles left and we enjoyed those.

The question with the ’04 Chateauneuf, the dilemma I should say, is what to do with it. Is it simply over-the-hill and a total waste, or is it in a “dumb phase” and will eventually improve? No way to tell!. The natural inclination is to open them all up within a few months in a fit of panic and get rid of the whole case. But then I would never know the answer. So I will sit on the remainder of the case, and patiently wait over the next decade for the wine to mature, hoping that my venture is not quixotic.

Sounds frustrating, doesn’t it? Actually it isn’t. Problems such as these are what make wine tasting unique and intriguing. When tackling such issues, us wine-collectors end up elevating the wine beyond a mere alcoholic beverage to be imbibed, to something akin to a novel. We now have to follow the life history of the Font de Michelle, and observe what happens in the long term, with whatever twists and turns the story might take. Naturally, we do this not just with a single label, but with countless others, thus plunging ourselves into an engagement with a complex web of long-running stories. Whether pleasing or disappointing, the experiences along the way are always fascinating and educational.