THE 2011 VINTAGE; BAD FOR MOST, GOOD FOR OTHERS 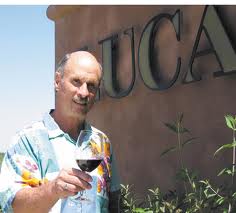 Those of you who live in the Central Valley of Northern California will remember 2011 for its most peculiar climate. We had the coolest summer this year of any I have experienced in 20 years. Then came early rains in September followed by a balmy October.

My own fig tree in the backyard didn’t seem to know what to make of it all. It usually begins giving fruit in late July, with sweet, juicy, orange sized purple mission figs abundant through August and September. Then as the weather cools, I get smaller, less sweet figs, less frequently, but it goes on well into December. This year, with the summer so cool, I go no figs. The buds just sat on the branches waiting for some heat. Then in October, when the fruit starts thinning out I finally started eating my crop.

As I observed the saga of my figs, I frequently wondered how bad it must all be for grape growers to wait for their crops to ripen in a summer that never was. Then came the early rains right before harvest, potentially ruining the crops further for those caught asleep on the wheel. I am certain that in prime California spots such as Napa and Sonoma 2011 will go down as a bad vintage.

Interestingly however, what’s bad for some can be good for others. Here in our backyard is the Lodi appellation, mainly known for its Zinfandels. As the wine universe expanded, so has Lodi, going from 8 wineries in the early 1990’s to over 30 nowadays. It has also gentrified its wine image, adding fancy tasting rooms, all sorts of road signs directing visitors to wineries, better restaurants, wineries with concerts, and more.

As it struggles to achieve respectability in an increasingly crowded wine world, Lodi struggles with its main problem: heat. The climate here is too hot, temperatures frequently topping 100 degrees F in the summer, and the wines turn out accordingly. They are high extraction, high alcohol, by and large very big wines.

Therein lies the secret gift of 2011. Dave Lucas, whose picture you see above, is one of Lodi’s best winemakers. His Zinfandel, which he labels Zinstar, has always been better crafted and more restrained than the rest of the lot, and in good vintages, ageworthy. His Chardonnay has always been in an Old World style, even before the “Anything But Chardonnay” (ABC) movement gained traction; still it can’t help but reflect the fruit forward qualities of its climate.

In a recent wine club event at his winery Dave indicated that while 2011 may have been a disaster for many, it was wonderful for his wines in Lodi. Cooler weather means more restrained wines, possibly more nuanced since they won’t be drowning in all that alcohol. Why, it was so cool that he anticipates success with some pinot noir plantings he is about to vinify.

Pinot noir  from Lodi? Get out of here! Everyone knows this fickle grape does best in cooler climates, flourishing in California mostly in areas that receive cool ocean breezes. I will be curious to see how it turns out.

I am sure we will soon return to our usual summer heat, and 2011 will be a bizarre memory. Hopefully it will remain encapsulated for years to come in finer wine from Lodi.