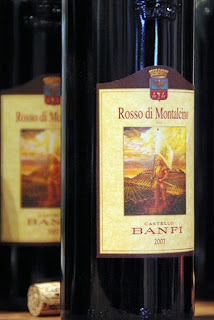 The magazine Wine Spectator, usually a champion of impossible-to-reach, hoity-toity wines, recently published a long list of what they considered “value wines” (under $30), from around the world(10/15/2011 edition). I suppose with the ongoing economic crisis, they have to cater to a certain segment of previously wealthy readers who are still interested in fine wine. As I have known well, and contrary to common opinion, the best values are in non-California wines. France, Italy and Spain, so called “Old World” winemaking regions, featured prominently in the list. One red label that appeared in their list was Rosso di Montalcino, an appellation I myself have considered a great bargain.

Rosso has an affectionate nickname of “baby Brunello”. That’s because it is the secondary wine of the famous and much more expensive Brunello di Montalcino. Located in Tuscany, south of Florence, the Montalcino region makes what is arguably the best expression of the Sangiovese grape, the flagship varietal of Italy. We encounter Sangiovese much more commonly from such other Tuscan appellations as Chianti, Montepulciano, Marremma and Bolgheri. That’s because Brunello, with a relatively small production of 330,000 cases per year, and some of the highest prices from Italy, is not as accessible.

A Brunello di Montalcino is a sublime wine experience. Smooth, well balanced, more fruit forward than its other Sangiovese cousins, and most importantly not nearly as acidic as the rest of the bunch, it is a palate pleaser. But woe those high prices! For lovers of Brunello who have pocket-book issues, the best alternative is Rosso di Montalcino, also made in the region, from the same grapes but only aged 6 months in oak and released within a year, as opposed to the more expensive treatment Brunello receives in a 3 year process of aging. Thus Rosso is a “cash flow” wine for the producers of the region. In some poor years, the producers might release all their wine as Rosso, and none as Brunello, in order to protect the reputation of the latter. Better to take a  financial hit with the expensive stuff one year, than a longer term damage with a tarnished image.

My experience with Rosso is that while not a sublime, life changing experience, most are good, solid wines, well balanced, not as fruit forward, food friendly, and well worth the price. They are especially good bargains in restaurant wine lists, which in the San Francisco Bay Area, my hunting grounds, can be outrageous. The Rosso’s listed by the Spectator Banfi, D’Orcia and Angelinin were $25, $24, and $22 respectively. Prices may vary in your local wine shops.

For those who are tired of Cabarnet, Merlot, Zinfandel and other “usual suspects”, I highly recommend Rosso di Montalcino as a refreshing alternative.