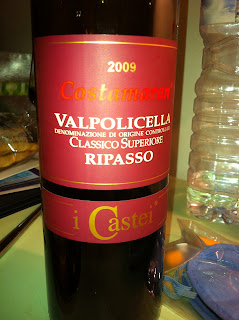 My recent travels took me to Northern Italy. As I toured the scenic, colorful towns of the Cinqueterre, historic Mantua and Verona, and the two northern lakes, Garda and Como, I found myself firmly planted in the Veneto wine region. Here the main red is Valpolicella and its recent resurrection to a fine wine status, at least in our eyes here in the U.S. is nothing short of remarkable. My Valpolicella of choice was Ripasso, mainly because at around 17-22 Euros in most restaurants, it delivered good quality at a reasonable price (again, by San Francisco standards).
Valpolicella was once a darling in America, back in the 1970’s. Anyone remember “Bolla”, and the incessant TV commercials featuring it? Flooding the market with poor quality wines, Italian exporters cheapened the image of Valpolicella for decades to come, and it all but disappeared from the “hip” scene. The predicament of Valpolicella was repeated in other regions of Italy, most notably Tuscan sangiovese which cheapened the image of Chianti. The lesson from these regions is that once tarnished, reputations take a long time and large effort to re-establish. Chianti recovered sooner.
The basic structure of Valpolicella, made mainly of the corvina grape, in a mix with others,  is akin to Beaujolais. It is a light wine which reflects its cool climate origin. The word “ripasso” refers to a winemaking process which enhances the wine into a more robust structure. Directly translated as “repassed”, the technique is essentially an extended maceration of the grapes with extra skin and seed during the fermentation process. This adds more food for the yeasts, thus enhancing the body and alcohol content of the wine.
Valpolicella makers began experimenting with the technique in the 1980’s, and with its success, not only did ripasso  become commonplace, but eventually came to be attached to winee labels when this process was utilized. In 2009 Valpolicella achieved DOC designation, a formal appellation declaration with rules created for winemakers on how to make the wines. Ripasso now became a formal designation, placing it below Amarone in the quality and price line-up of Valpolicellas.
The wines have dark berry aromas and flavors, good upfront fruit, and are well balanced with good acidity in the finish, making them fruit friendly. While stronger that pinot noir in body, they are not as big as cabarnet or syrah, Ripassos therefore can be friendly with a vast array of foods. We enjoyed them with grilled fish, various pasta sauces, poultry and lighter red meats, essentially ordering it every night with dinner for 10 days.
Those looking for alternatives to the usual reds, especially in Italian restaurant wine lists where known entities, Chianti, Barolo, Brunello to name a few, fetch enormous prices,  Ripasso is still a good deal. I suspect this won’t last long. All new “secrets” I have discovered have burst into the open with dismaying speed.
What I find most remarkable about Ripasso is how one of countless techniques employed in vineyard management and winemaking can come to dominate a label, usually populated by geography, varietals or family names. It goes to show the importance ascribed to fortification in today’s world. where drinkers demand increasingly fuller bodied wines.