REFLECTIONS ON BORDEAUX ACROSS DECADES 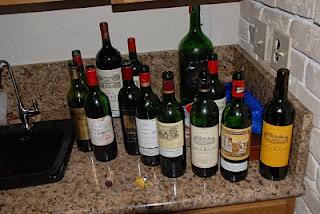 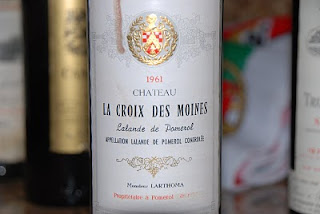 For most Bordeaux drinkers sampling old ones, really old, is a rare and sporadic experience. Some who are old enough to have aged them in their own cellars can do this with ease. The few wealthy enough not to mind 3 or 4, even 5 digit prices in restaurants for such wines can imbibe in this setting. For the rest of us it has to be a shared experience. Our annual Bordeaux highlight is a party thrown by our friend Jim Stephen in his house at Pleasanton.
Jim buys a lot of old Bordeaux on mix & match auctions from such outfits as Butterfield’s. He has mastered the game well enough to pay surprisingly cheap prices for these, usually lesser name wines, but acquires some that are very old, on the margins of accepted survivability. Naturally such bottles cannot be put away for further aging. Hence the party. He invites those seriously interested on the subject, including a few professional wine shop owners, and everyone pitches in a bottle from their collection. We then end up with a huge line up of old Bordeaux that spans various decades.
Last night’s tasting was a good example of such a party. A total of 21 bottles appeared representing the 1960’s (3), ’70’s (4), ’80’s (6), ’90’s (2) and one from 2004. Another 4 bottles turned out corked, or otherwise no good. I suppose this latter fact is the first lesson of such a tasting. In any collection of old wines there will be a certain percentage of bad ones that have to be discarded. One has to accept this as a fact, quit lamenting, and move on.
The wines were mostly from the assortment of Left Bank communes, plus a couple of St. Emillions. They were mostly 1855 Cru Classe, but from lesser growths. The highest was a 2nd Growth Chateau Palmer (1986), the only second. There were no first Growths. Therefore as Bordeaux goes this was not a super-snobbish tasting, but rather it represented what average enthusiasts could amass without breaking the bank. There were no sub-themes within the group such as verticals. It was an assortment which pitted various decades against each other.
The general trend that emerged from this tasting was an affirmation of Bordeaux truism: vintage matters. In Bordeaux when a given vintage is declared “great” by the pundits, that means that it’ll age over many decades, mature late and survive surprisingly long. Conversely, unlike Burgundy, if a vintage is declared “so-so” (they never say “bad” any longer, for marketing reasons; they still have to sell the wines), the wines are drinkable, but should not be aged over many decades. The lesser vintages need to be consumed within somewhere around 15 years or so.
In this tasting the decade that really shined was the 1980’s. These wines were now coming to their own, and expressing the potential of Bordeaux in its full blossom. An ’85 Lynch-Bages, and ’86 Palmer were the favorites of the group along with an ’89 Cantemerle. These were all very good years. Conversely, the wines from the ’60’s and ’70’s, while still by-and-large drinkable, clearly showed their age, with old musty noses, fruit that was dropping out, bare bones structure alone revealed. These are now novelty items to taste for curiosity. Top among them was a Croix Des Moines, a non-Cru-Classe Lallande de Pomerol from 1961, a fabled year. It was rather disagreeable, with all the features I just mentioned, but still drinkable. One wonders how the top dogs from such a year, such as Petrus or Latour are doing. But these belong in a more rarefied atmosphere to which we can’t rise.
I began collecting in the 1990’s and my oldest ones are from 1995. I contributed a 1996 Lafon-Rochet (St. Estephe) to the tasting, and this clearly appeared too young, still closed, still awaiting its bloom 15 years later. Had I opened just that bottle alone, say at dinner with another couple, I may not have felt that way. Pitted against 3 prior decades however, its teenage nature clearly showed. And what about a 2004 Lafon Rochet that our friend Alan brought? As he himself put it, it was still “a puppy”.
After a decade of drinking and studying Bordeaux, I still feel like I don’t have a good grasp on the subject. I suspect the reason is that tastings such as this are so rare in my life. One has to taste frequently and broadly, not only across the various regions, but more importantly across the decades in which they have been aged. Once a year is simply not enough, but it’s better than none, and what’s more, a great deal of fun, with lively conversation among the people involved, and a wonderful homemade meal that Jim throws in as a bonus.