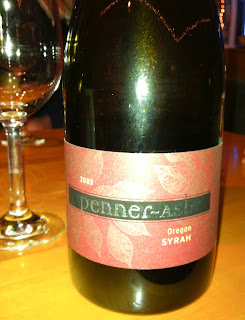 Last night the above bottle appeared in our weekly tasting where we try to identify blinded wines. This 2003 Penner-Ash syrah was still surprisingly young. It had a distinct domestic syrah nose, but its flavor profile was more typical of Central Coast pinot noir, of the kind that is now ubiquitous in the Edna Valley, Arroyo Grande and Santa Lucia Highlands. It had  smoky, dark berry fruit flavors upfront, noticeable but subtle sweetness in mid-palate, and a spicy finish with hints of oak. Our group tilted between syrah and pinot in their guesses. We were all certain however that if was American.

When we unveiled it, it was a surprise. The Willamette Valley of Oregon is better known for its pinot noirs, syrah being an uncommon varietal to emerge from there. This was what we have come to call a “Friday night wine”. We tend to stomp each other with unusual bottles, rather than bring ones that are easy to guess. The experience made me realize that there is an American version to what I have come to call the “pinot-syrah confusion”.

In the late 1990’s and early 2000’s, when our wine tasting group was more Burgundy oriented, the French version of this confusion occurred almost every Friday night. A given bottle would have characteristics of both Burgundy, and Rhone (usually Northern  appellations which are pure syrah) and we would vacillate between the two in our guesses as the bottles stood, blinded. The professionals in our group would be somewhat more accurate in their guesses, but even they had reasonably frequent misses. Now, as pinot noir has taken off in the Western U.S., and has assumed its own, distinctly different character, many examples of the varietal seem akin to syrah, which is also expressed in a novel New World version.

How can such divergent varietals be mistaken for each other? Isn’t pinot noir supposed to be a soft, dainty, delicate, silky wine, as opposed to the more muscular, fruity and spicy syrah? How can members of my wine group who have been honing their senses with the guessing game for decades (I have been at it for a lesser time, only 17 years), so frequently make this mistake?

I have answered the second question to my satisfaction years ago. We are not the ones mistaken. The problem lies with pinot noir makers who, for various reasons add syrah to fortify their wine. In Burgundy this is illegal, and with their strict AOC rules can land a winemaker in jail. Illicit midnight trucks ariving from the Rhone however, have been part of the Burgundy legend since time immemorial, the French being quite proficient at circumventing rules. Lesser vintages, or weaker crops have thus been traditionally alleviated with syrah.

In the U.S. there never seems to be a “lesser vintage”. The winemaker’s motivation is a bit different. The average U.S. wine palate is not honed to the subtleties of pinot noir. It expects “power”. High extraction fruit, high alcohol, evident oak are all part of the demand. It is easier to deliver this with a syrah-spike than with pinot noir alone, even in such warm appellations as the Cental California Coast.

Take Sea Smoke, a highly regarded pinot from the Santa Barbara region. When tasted young, it clearly evokes syrah. My friend Ash Mehta of “tastes of the Valleys”, a wine shop in Pizmo Beach, who knows a thing or two about pinots grown in his backyard confirms that any Central Coast pinot that tastes like syrah, has syrah in it. “It is the worst kept secret around here”, he says.

Does any of this really matter? In our currently diverse wine universe, I suppose not. In fact modern American pinot noir makers are now catering to both sides of the fence, producing big powerful syrah-like pinots for those who lean in this direction, and leaner, more Burgundian ones for others. Burgundy of course, also goes on as it has for centuries. Our inability to resolve the “pinot-syrah confusion” in our guessing game also goes on, our frustration  over it by now well accepted with resignation.

A UNIQUE DINNER IN PARIS, AT THE EIFFEL TOWER