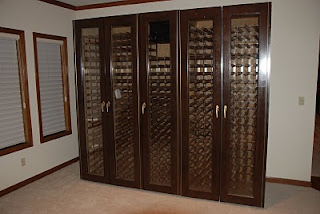 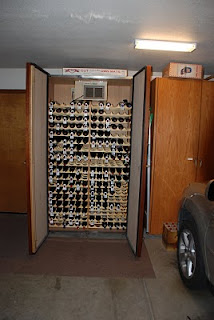 A recent addition to my living room, the picture you see on the left, brings a new chapter to my wine collecting saga. It is a 920 bottle indoor storage unit, a monster. But a pretty one.
I started collecting in 1996 and soon found the need for a storage unit. Stockton being located in a delta with a high water table, there are almost no houses with basements here (with the exception of the Miracle Mile neighborhood north of Downtown). Thus all wine storage occurs above ground, either in dedicated cellar rooms or, as in my case in storage units such as what you see in the picture to the right. I eventually acquired three such units which occupy a lot of space in my garage.
Garages in Stockton serve all sorts of storage purposes, again because of the lack of basements. As it turns out, they are not ideal spots for wine. Our very hot summers create stifling heat in them, and the heat emitted by the overworked cooling units adds to the problem, creating a vicious cycle. One of my coolers regularly shuts off due to overwork in the worst heat of the summer, leaving the wines vulnerable at a time of highest need. Then there is the problem of one of the cars blocking off two units. It happens to be my wife Julie’s. It gets pretty tiresome to ask her to move her car just to pull out a bottle or two from them. Worse yet, she regularly crashes her car into the middle unit which now sports numerous dents in the shape of her license plate. It is a wonder that this unit is still functioning, harboring my most precious Bordeaux collection.
This collection was subject to a mega near-disaster a few years ago while housed in the neighboring unit to the right. As it filled with more Bordeaux bottles, the thin wire-cage racking sagged enough that after the addition of a few more bottles, the straw that broke the camel’s back, the collection collapsed and avalanched onto itself. My heart nearly sank when I saw the mess. I enrolled the assistance of my kids and my friend Archie in a delicate attempt to salvage the collection by engaging in an elaborate game of Jenga, pulling the bottles out carefully, one-by-one, all the while worried that they would all spill out of the unit into the garage floor and break. We were successfull. I only lost one bottle, a 2000 Ch. Lafon-Rochet, which lost its top half. The bottom came out still with wine in it. Archie and I consumed it as a reward for our labors. It was a bit too young, still tight. Oh, well!
A move indoors was long overdue, both to segregate the collection from the dangers of the garage, and to convenience myself in more ways than one, in accessing the wine and regaining useful space in the garage.
For those of you who don’t engage in wine collecting it may come as a surprise to know that a wine collection is like a garden. Each collection is unique to its creator, but all need the same kind of care and regular attention as a garden. Abandoned wine collections quickly grow weeds. This is a lesson I learned from my friend John Morozumi. In the last few years of his life as his dementia slowly worsened, it turned out he ignored his large collection, also housed in a garage. After his passing we could not believe the volume of “weeds” that came out of there. I should know, because I sampled many, along with my wine group friends, on several occasions commemorating him where they were served with a sense of urgency because they should have been opened years earleir.
Some people get real anal compulsive, and inventory their wines into computerized lists. Every time they pull something out, or put something in, they have to log into their computers as though they work in a warehouse. I am obsessive-compulsive enough at work; you can’t be a good doctor if you aren’t. I don’t need it in my leisure pursuits. My collection is divided into general zones arranged according to appelation if French, varietal if domestic, but with loose borders. Some bottles invariably get lost in there. But then the surprise of finding these, whenever they surface, is one of the unique pleasures of wine collecting. A small amount of chaos adds a lot of color to the experience.
Various collectors place different emphasis on what they store for the long term. It varies with price and taste. Many buy in cases, i.e. dozens. I usually don’t. Mine is two of this, four of that. It does not allow for progressive tasting of a given label over many years of maturation, but then I don’t need this, since my wine tasting group regularly provides this experience by allowing the sharing of all the collections. This type of mix & match style makes for more diversity.
There are all sorts of articles out there in books, papers, and wine magazines giving advice on how to collect wine. I therefore don’t need to repeat the basics. My own rules, after nearly 15 years of collecting boil down to a few items: don’t store white wine in the long term; don’t enlarge the collection to a size humanly impossible to consume; concentrate on wines known for longevity such as Bordeaux; quit buying long-term wines about the time you retire; pay regular attention to the collection and what’s going in and out of it. Most important of all, as I do with all my other hobbies, do not lose sight of the fact that this is not work, or bussiness; it is supposed to be fun. Enjoy it.