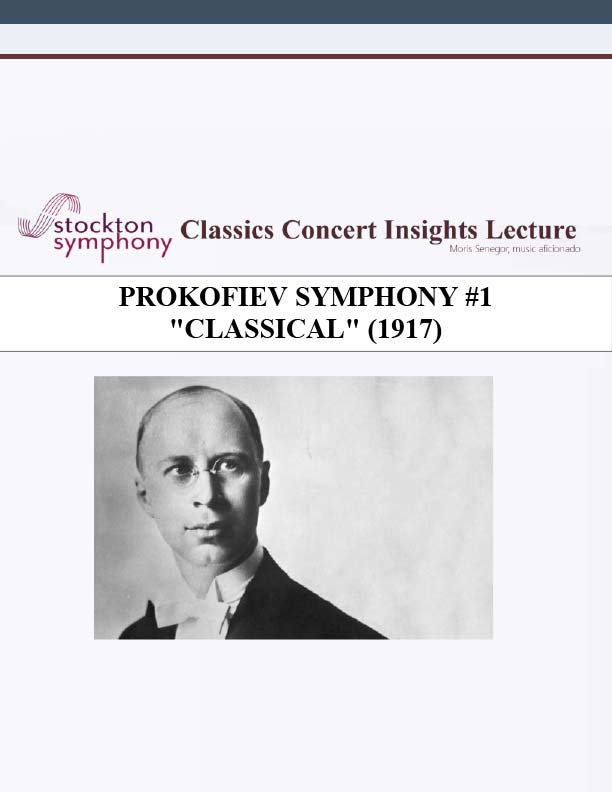 HISTORY OF THE SYMPHONY:

“CLASSICAL” FEATURES OF THE FIRST SYMPHONY:

THERE IS NO EXPOSITION REPEAT:

SECOND MOVEMENT: Larghetto; A major; A – B – A Form

Prokofiev chooses a Gavotte,  instead of Minuet, the Classical Era norm,  for this movement. Gavotte is a duple meter dance (2/2 or 4/4 time) of French folk origin, also popular in the court of Louis XIV, like the minuet.

Prokofiev’s First Symphony adheres to the overall plan of a Classical Era work, is brief, and sounds Classical on the surface. However, its details and construction reflect a post-Romantic aesthetic, dramatically divergent from the Classical Tradition. In this regard, the symphony is a product of its own time.

“If the radio announcer told you he was going to play something by Haydn and started a recording of the Classical Symphony, it would take you only a few seconds to figure out that you were being put on. …Prokofiev was not trying to produce a forgery….Nor did he intend a parody…This is a high spirited and sparkling salute.” (Steinberg)

Compared to Beethoven, Prokofiev’s deviations from the classical norm are more widespread; he did, because he could, catering to ears receptive to such deviations, while Beethoven’s audience was not.

“While remaining within the tradition of the classical symphony, which he understood and revered, Prokofiev twisted and distorted it without destroying it.” (Minturn) The exact same can be said of Beethoven’s First Symphony.