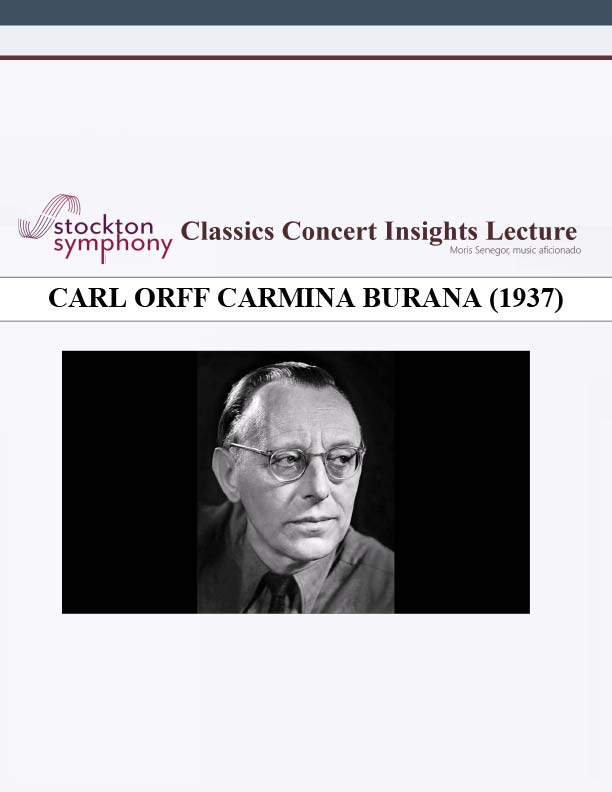 BURANA: Latin for, from Bayern, Bavaria.

KEY TO THE CHARACTERS:

This is an introductory section with two dramatic, hymn-like carmina that lament the vagaries of fortune.

UF DEM ANGER (ON THE GREEN)

This is the second section of Primo Vere, Springtime. The music changes from hymns and chants to dance, the subject matter no longer lofty with mythological allegory, but rather belonging to the common man, the peasant.

The next four carmina take us to the tavern, an exclusively male domain, featuring defiant songs about drinking, gambling and sinning, with much mockery of the church. One remarkable carmen expresses the fate of a cooking swan in its own words. The overall theme of the section is closely related to Fortuna Imperatrix Mundi.

COUR D’AMOUR (THE COURT OF LOVE)

In this section, with the largest number of carmina (ten), the work returns to the theme of love, Venus reigning supreme. Male and female desire is expressed more directly by the baritone and soprano, with rising passion, Cupid a frequent participant. The tension and intensity rises toward the union, the frenzied pace of the passion regularly interrupted by brief arias from the soprano, eventually culminating in a grand celebration of the union as a mass devoted to Venus.

This section consists of only one Carmen.

As for audiences, “Carmina Burana is one of the few box office certainties of 20th century music.”