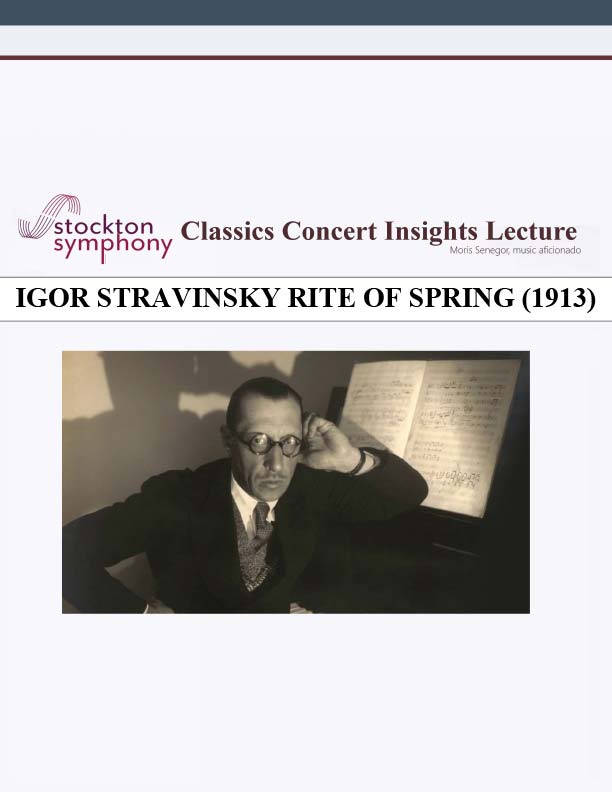 “What Beethoven’s Ninth Symphony was to the 19th century, so Igor Stravinsky’s The Rite of Spring was to the 20th. The single most influential piece of music composed in its time, the game changer, the one work of its century that no later composer could avoid. ” (Robert Greenberg)

HISTORY OF THE RITE:

CHARACTERS INVOLVED IN THE BIRTH OF THE RITE:

“The Rite of Spring is unified by a single idea: the mystery and great surge of creative power of spring.” Stravinsky

There are various versions of the narrative for The Rite. The following is the earliest surviving one from Nicholas Roerich:

“The first part which bears the name “The Kiss of the Earth, is made up of ancient Slavonic rituals – the joy of spring. The orchestral introduction is a swarm of spring pipes; later, after the curtain goes up, there are auguries, khorovod rituals, a game of abduction, a khorovod game of cities, and all of this is interrupted by a procession of the “Oldest and Wisest,” the elder who bestows as kiss upon the earth. A wild stomping dance upon the earth, the people drunk with spring, brings the first part to its conclusion.

In the second part, the maidens at night perform their secret rituals upon a sacred hillock. One of the maidens is doomed by fate to be sacrificed. She wonders into a stone labyrinth from which there is no exit, whereupon all the remaining maidens glorify the Chosen One in a boisterous martial dance. Then the elders enter. The doomed one, left alone, face-to-face with the elders, dances her last Holy Dance – The Great Sacrifice..…The elders are witness to her last dance, which ends in the death of the doomed one.”

MUSICAL LANGUAGE OF THE RITE:

Stravinsky takes “dissonant, irregularly formed musical ‘objects’ of very brief extent and releases their latent energy by firing them off at one another like so many particles in an atomic accelerator.” (Walsh)

“The music needs to be experienced in the way it was originally meant – as a ballet, a dramatic narrative rather than the ‘abstraction’ Stravinsky later preferred.” (Hill)

PART I: ADORATION OF THE EARTH

This part consists of various tableaux of pagan Slavic rites conducted at the foot of a sacred hill, in a lush plain. The sections within do not have a running narrative, but rather stand by themselves as individual scenes.

An overture with curtains closed. The music evokes the awakening of nature in springtime with a build-up of different sounds.

MUSIC: Slightly over 3 minutes. Woodwind dominated music in three sections, A – B – A

AUGURIES OF SPRING (DANCE OF THE ADOLESCENTS):

This tableau is of an old woman, a soothsayer dressed in squirrel skins, instructing and leading the youth in ritual dances welcoming the spring. The dancers are dressed in historically correct, ancient Slavic costumes.

It is in two parts, the first featuring male dancers led by the old woman, the second, female dancers. In the end they all dance. This division roughly corresponds to the two sections of music.

The curtain has opened to a scene of four stationary groups of mostly male dancers, one upright, the others huddled close to the earth, with the crooked old soothsayer in the foreground.

The powerful, irregularly accented beat of the music brings the upright group to life. Four male dancers begin a foot-stomping circle dance. The old woman dances around the huddled groups and, as the music leaps, so does she, with surprising energy, bringing another male group to life. She then leads the first group in a stomping dance to the irregular beats. The two groups join with the old woman in the lead.

During the quieter ostinato phase of the music with occasional melodies in solo instruments, unison stomping stops and more individual dances appear. A group of female dancers enters the stage and perform a variety of folk dances to the new tunes that erupt from the orchestra. As the music rises, another group of females, previously huddled, joins them. Eventually the males also join in, the entire tribe now alive and dancing while the music rises in a crescendo toward a loud wall of sound. The groups remain segregated.

Male and female dancers carry out a mating ritual in the form of mock abduction dances.

A group of male dancers jump up and down to drumbeats, behind a line of females who dance with rejecting gestures. Another group of females engages in folk dances that arouse a huddled group of males, and re-enact the same rejection scene. Females flee in unison, while fanfares erupt in music. Males and females join together, dancing in pairs – the abduction. A single bewildered female is left alone mid-stage, among all the dancers. She goads the females to separate and reject again. The male and female groups face each other as a new theme appears. Now only a few individual pairs join each other in dance while the others observe.

Dancers halt as the energy of the music dissipates to flute trills, transitioning into the next scene.

This is a brief, energetic, thickly textured section, full of fanfares, asymmetrically accented rhythms and, at the end, pounding chords.

Begins with slow, stately folk dances (khorovod) performed by male and female ensembles, with frequent bending motions, arms sweeping the floor or hands slapping the floor, a reference to the tribe’s oneness with the earth. Later, in a loud, dissonant section, the dancers repeatedly gesture up, faces and arms upturned in reverence to Yarilo, their sun God. In the fast, dissonant section of music, they perform fast, foot stomping dances, reminiscent of the Dance of the Adolescents. The slow opening music returns, and so do the dances that started the movement.

NOTE: I can imagine rioting audience members at the Théâtre des Champs-Elysées momentarily placated by the more “conventional” sound of the Spring Rounds until Stravinsky, as if rudely joking, alters the music into a “ghastly caricature” (Hill) and then, in a final punch line, delivers a teasing, tiny bit of the earlier sound. Onward with the riot!

The two tribes engage in dances of mock rivalry, the men mimicking wrestling and hand combat. Later, they all join together in folk dances as a group. Everyone pauses as the procession of the Wise Elder begins.

MUSIC: Slightly less than 2 minutes. Music based on another ancient pitch collection: Dorian Scale. In two sections that alternate, A & B.

PROCESSION OF THE WISE ELDER:

The Wise Elder (aka The Sage, The Wisest & Oldest) is a very old man with long white hair and a waist long white beard dressed in a ceremonial white gown. He is gaunt and frail. He marches into the middle of the dancing tribe – now stone-still in deference – lurching and limping, supported by several tribal men. As the music rises to a frenzy, he stands in the midst of the men, while a group of men perform a reverent circle-dance around him, and others, all men, stand in one place and writhe in epileptic gestures.

THE KISS OF THE EARTH (THE OLDEST AND WISEST ONE):

The Wise Elder bends down to the ground, aided by his escort, and kisses the earth. He then rises and looks up to the sky, raising his arm toward Yarilo.

DANCE OF THE EARTH:

With the Wise Elder stationary in their midst, the tribe erupts into a wild dance, each individual performing their own moves, feet stomping, arms flailing, bodies thrown to the ground. At the midpoint of the dance, when the music begins a steady crescendo with the horns and violas playing triplets, the tribe engages a circle dance around the Wise Elder. As the crescendo reaches its massive climax they close in on him, forming a tight circle. At the abrupt finale they all raise their arms up.

NOTE: This finale presages the end of The Rite, also abrupt, where a group of Elders close in on the dead body of the sacrificed maiden and lift her in the air.

This part has a narrative running through the five dances that comprise it. It takes place at nighttime, beginning with a dance of young maidens who select a victim to be sacrificed, the Chosen One, and pay ritualistic homage to her in a Glorification dance. This is followed by a summoning of the elders who perform a ritual circle-dance around the victim. The Chosen One then dances herself to death in front of the elders in a final Sacrificial Dance.

The day has turned into night and the lively celebrations of the tribe convert to a solemn, mysterious, ominous occasion. A comparatively lengthy instrumental introduction (slightly over 4 minutes), a nocturne, sets up the mood for the dances to come.

MYSTIC CIRCLES OF THE YOUNG GIRLS:

Young maidens perform a nighttime ritual dance within a round light beam in an otherwise darkened stage. They select a Chosen One from their midst to be sacrificed.

GLORIFICATION OF THE CHOSEN ONE:

The young maidens perform a wild ritualistic dance around their Chosen One who stays frozen, like a statue, head held up high, in the center of the light circle. At the end they all fall to the ground in deference, like spokes of a wheel, facing the Chosen One at the center.

MUSIC: Approximately 1.5 minutes. In three sections A – B – A

This “ferociously exultant … Amazonian dance,” (Hill) parallels Part I, Dance of the Adolescents, in that it is shocking, “savage” music after comparatively peaceful introductory material.

EVOCATION OF THE ANCESTORS:

The Chosen One remains frozen in the center of the light circle while her maidens repeatedly fall to the ground amid the fanfares and drumrolls of this brief introduction to the next section. At first they create another spoke-like arrangement when they fall, but facing away from the center. Then they move out of the light circle and perform their falls in comparative darkness. The falls represent ritualistic reverence to the maiden who will be sacrificed. At the end of the scene a group of elders appear behind the light circle, ready for their own ritual to come.

RITUAL ACTION OF THE ANCESTORS:

This is a prelude to the climactic Sacrificial Dance. The tribe’s elders perform a ritualistic dance around the Chosen One before witnessing her death dance.

Having spent the last three major sections frozen in the center of the light circle, the Chosen One comes to life and dances herself to death. Her moves are frenzied, often featuring jagged jumps to equally spiky music. In the middle section the adolescents and elders dance in a circle around her, eventually leaving solely the elders, who in the last section, observe as she resumes her agitated dance and becomes more fatigued. When she dies, they swoop in and lift her body over their heads.

MUSIC: About 4.5 minutes. Asymmetric A-B-A structure, second A much longer.

Depicting the final sacrificial dance of the Chosen One, this section is the wildest patch of The Rite, filled with barbaric fury and energy. The dance is in three sections, the first two ending with increasing expressions of fatigue from which the maiden recovers, dancing yet more feverishly. After the third, she literally drops dead.

“The Rite was Stravinsky’s Eroica.” (Taruskin)

The Rite is “a classic of modernism.” (Walsh)

“The genius of Stravinsky could not have received a more striking confirmation than in the incomprehension of the audience and its malicious hostility.” (Schmitt)

“The Rite, Russian as no music before it had ever been, made the Russian universal – which is to say, it Russianized the musical universe  – and thus transcended the Russian.”  (Taruskin)

“The huge, wrenching irony of it all is that with and through The Rite…Stravinsky left Russia for good.” (Taruskin)

Who wrote this fiendish “Rite of Spring”?

What right had he to write this thing?

Against our helpless ears to fling,

And then, to call it “Rite of Spring,”

The season when on joyous wing,

And harmonies in everything.

He who could write “The Rite of Spring,”

If I be right, by right should swing.