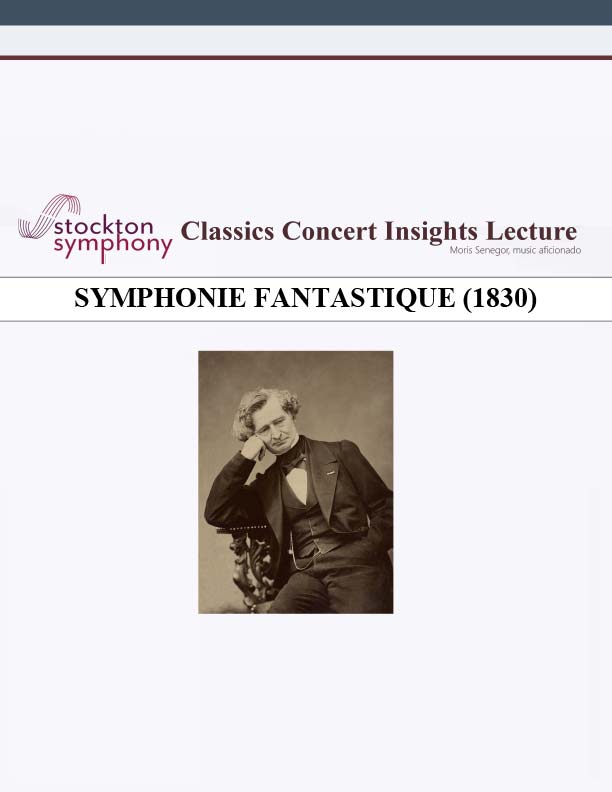 EPISODE IN THE LIFE OF AN ARTIST; A FANTASTIC SYMPHONY IN FIVE MOVEMENTS

“No disrespect to Mahler or Shostakovich , but this is the most remarkable First Symphony ever written.” (Steinberg)

FEATURES OF THE ROMANTIC ERA:

BERLIOZ AS A COMPOSER:

NOTES OF THE FIRST MOVEMENT:

NOTES ABOUT THE SECOND MOVEMENT:

NOTES ON THE THIRD MOVEMENT:

NOTES ON THE FOURTH MOVEMENT:

NOTES ON THE FIFTH MOVEMENT:

“From the vast inner realm of a heroically strong imagination erupts a shower of passions as if from a volcano.” Richard Wagner

“A brilliant command of the technical resources of the orchestra.” In addition to using novel instruments in a symphonic setting, harps, English horn, bells, “all previously familiar only in opera, he is requiring them to play in new combinations and in unexplored parts of their range.” Hugh Macdonald

“(Having gone through Berlioz’s symphony I was) first dumbfounded, then shocked, then at last struck with wonderment.” Robert Schumann

“….what a prodigious flight of inspiration, what intrepid audacity….Beethoven alone had previously given a program to a symphony. But (with Symphony Fantastique) it’s not merely a case of painting a natural landscape with peasants; the composer places himself on stage.” Camille Saint-Saëns

“The first musical expedition into psychedelia….Berlioz tells it like it is. You take a trip, you wind up screaming at your own funeral.” Leonard Bernstein