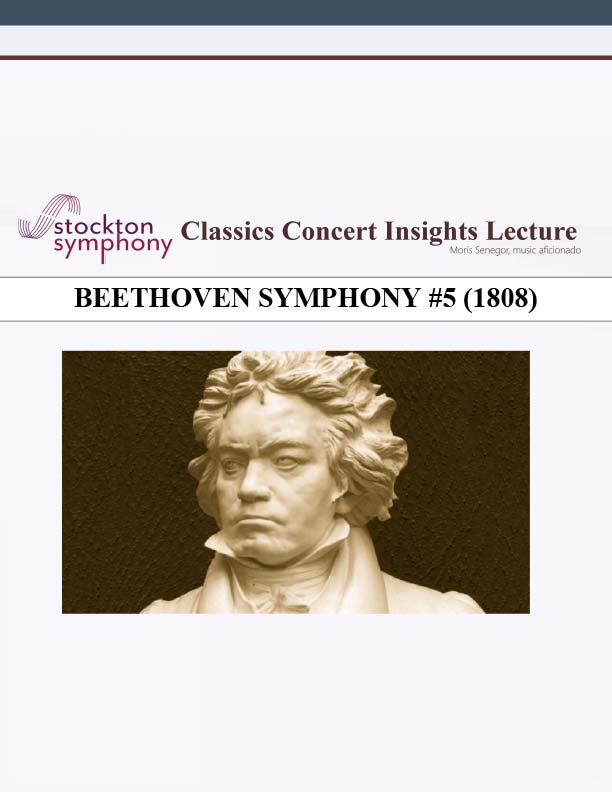 Download PDF
MUSICAL HISTORY: BEETHOVEN BIOGRAPHY (1770-1827): BEETHOVEN’S CAREER (1770-1827): BEETHOVEN’S COMPOSITIONAL STYLE: HISTORY OF SYMPHONY #5: THE “FATE MOTIVE”: CATHARSIS SYMPHONY: BEETHOVEN SYMPHONY #5: FIRST MOVEMENT EXPOSITION: EXPOSITION REPEAT: ???? DEVELOPMENT: RECAPITULATION: CODA: CONCLUDING REMARKS: SECOND MOVEMENT A –B – A’ – B’ – A’’ – B’’ – A’’’ – CODA CONCLUDING REMARKS: THIRD MOVEMENT SCHERZO: TRIO: SCHERZO DECAPO & SEGWAY: CONCLUDING REMARKS: FOURTH MOVEMENT EXPOSITION: DEVELOPMENT: RECAPITULATION: CODA: CONCLUDING REMARKS: Ludwig Spohr (1784-1859), composer and conductor, a Beethoven contemporary highly regarded in his time, thought the theme of the first movement scrappy and undignified, and the whole finale an orgy of vulgar noise. But he admitted that the re-appearance of the scherzo in the last movement was a stroke of genius for which the rest of the work might be forgiven. Referring to the scherzo re-appearance Tovey writes, “this is the one true solution which confirms the truth of the former terror and the security of the present triumph; but no lesser artist could have found it.” “The source of Beethoven’s unparalleled energy here is in his writing long sentences and broad paragraphs whose surfaces are articulated with exciting activity.” (Steinberg)
Download PDF