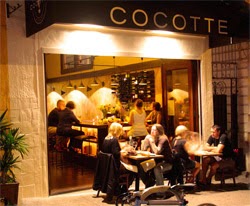 “Are you from the neighborhood?” I asked a young man sitting next to us at the bar. We were at Cocotte, a small French bistro in San Francisco, distinguishing itself as a “French Rottisserie”, chickens roasting inside a prominent grill at an open kitchen in the back of the room. It was a small store-front restaurant with a tiny entrance into which they had managed to squeeze an L-shaped bar for ten.

“No,” said the man in a friendly tone, “we’re from the South Bay.” He then proceeded to describe all that his group had ordered. I was surprised. The place sure looked like a neighborhood restaurant.When our taxi arrived at Hyde and Jackson, we found ourselves in a dark, quiet residential block with cable car tracks lining the narrow street, an occasional cable car rambling by. The restaurant was well concealed  along with a next-door seafood place, amid Victorians with dimly lit windows.

We were on-time at 8 p.m., but they weren’t. Downing a bottle of 2012 Ribeauville Pinot Blanc from Alsace, we waited at the bar and consoled an apologetic young maitre’d who interrupted us many times, distraught that our seat had not opened up yet. We didn’t mind, for we were still full from a late lunch at the Wharf. Besides the white wine was a good aperitif, crisp and fruity, slightly sweet, low in alcohol.

When they eventually seated us, we found ourselves in a cozy alcove at the far corner of a small dining-room, under a staircase, at a round bistro table and two small armchairs. A Tiffany table-top light illuminated the otherwise dark space. It looked romantic, harkening back to Jazz Age cabarets. Nearby were a line of diners, huddled close at square, spartan tables, eying us with envy. The alcove even had curtains, stylishly held open. I quipped about how they might come in handy if Julie and I decided to get intimate, wink, wink, loud enough to draw chuckles.

By now the pinot blanc was running dangerously low. Some needed to be saved for the lobster salad I intended to order (I had studied the menu on-line prior to arrival). So I asked Julie to produce the 2000 Chateau La Tour Carnet concealed in her purse, a fourth growth Bordeaux from Haut Medoc. It was from my own collection. I didn’t know what the corkage fee was and I did not care.

Our waiter, a handsome Matt Damon look-alike who concealed his youthful look with a shabby beard, was much impressed. “They don’t make bad wines in Latour,” he said. He was not the first to confuse this label with the more fancy First Growth, Chateau Latour. I did not correct him.

The wine was divine. Perfect Bordeaux nose, soft and mellow, and low in alcohol -what a refreshing novelty – well balanced, easy by itself or with food. We proceeded to suck this one down too, eventually putting the breaks on our friendly waiter’s generous pours, hoping to save some for our entrees.

My lobster salad with a base of baby beets was quite good, and the pinot blanc complemented it well. I then had beef Wellington, Julie coq au vin. The beef was tender and perfectly cooked. Its surrounding puff-pastry crust was crisp and tasty. Julie liked hers too. The Bordeaux kept flowing.

We first made friends with a Swedish couple from New Jersey in one of those mundane tables nearby. They were headed to Sonoma the next day, wine tasting in a limo. We gave them some winery tips that they took to heart. Another couple nearby, San Franciscans from the Sunset, offered their own suggestions and continued chatting with us after the Swedes left. I pitched my book “Dogmeat” to them, and they found it fascinating.

After they left, as we switched from wine to espresso and shared a banana creme brulee,  a single guy from Sausalito sat next to us at the Swede’s table and proceeded to converse non-stop about any-and-all subject. He had been visiting friends nearby and decided to pop in for a late bite, rotisserie chicken and fries.  He was bright and friendly and a bit mysterious. We never quite figured out why his wife, at home across the Bay wasn’t with him.  We compared wine and restaurant experiences. He knew a lot.

For a small restaurant in a quiet, sleepy neighborhood, Coccotte seemed to draw diners from all over.

Good food, good wine, friendly service, even friendlier diners. A fully satisfactory, not-so-unusual San Francisco experience. The final bill was reasonable, corkage $20. We walked out into a cool, dark, peaceful Hyde Street near midnight, the cable car tracks now empty, and walked a few blocks toward Van Ness. There was no likelihood to catch an unoccupied taxi on Hyde.

We returned home reaffirmed in our knowledge that a night out dining is not just about food and wine. It’s about a special chemistry between them,us,  the wait staff  and other diners. On rare occasions these all blend well, sometimes in fancy, celebrated spots. It is more memorable when it happens in modest surprises like Cocotte.

CORSICA AND PATRIMONIO; A REGION WORTH A TRY