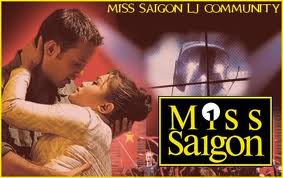 Some years ago I subscribed to numerous seasons of Broadway plays in Sacramento. I did this to alleviate  what I  perceived to be a gap in my cultural experience. After about five years and some 50 or so plays I had my fill of it. What I discovered was that by and large most so called “classic” Broadway musicals are bland, formulaic, predictable, and soppy with melodramatic emotion. Most “modern” ones seem to rely on flashy special effects for their impact. Creativity and artistic virtue was hard to find  but  much appreciated on rare occasions  when they came along. “Master Class” and “Chicago” were two such plays that I did like.

In the end it was “Miss Saigon” that caused me to terminate my Broadway quest. A modern adaptation of the opera “Madame Butterfly”, this musical took the already over-the-top melodrama of the Italian classic to new heights and added flashy special effects to wow audiences. It ended with a helicopter exploding and burning on stage. As the audience rose for a standing ovation, I felt nothing but disgust and told my wife, “That’s it! We’re done with the Broadway Series.”  I was dismayed by the naked manipulation of audiencel emotions through melodrama and splash. I failed to see any originality or artistic virtue in the play (excluding that of the special effects designers, of course). “Miss Saigon” came to exemplify all the worst in not just American theater, but pop culture in general.

These now well buried feelings from two decades past came to surface last night in, of all places, our Friday night wine tasting group. It was a large tasting; around 14 bottles, composed of mostly French Rhone and Bordeaux wines, a domestic pinot noir,  and  a couple of French whites (we never know what anyone will bring to tasting, so every occasion assumes its own unique flavor as the bottles are uncorked). Last night we had a guest, a sophisticated diner and oenophile who so far has cut his teeth mostly on celebrated wine labels from Napa/Sonoma and other Western appellations. With each French wine that was blindly tasted and then unveiled, there was a distinct and consistent difference of opinion between this guest and the rest of us, those acclimated to France.

With a few exceptions,  our guest consistently failed to appreciate what we saw in these. He was very polite, and it was clear he was trying hard to like what we liked. But his palate, honed by the American style for all those years, could not reorient in just one night.

I came to realize that he was no different that those who subscribe to Broadway shows and never tire of them year after year. American wine, I thought, has a cultural likeness to shows like “Miss Saigon” and its predecessors. It borrows from European classics, and purports to “update” or “modernize” them. It does so via over the top expressions and special effects. Over-extracted fruit forward styles, high alcohol, high oak, leanings towards sweetness rather than acidity, adding “make-up” to reduce tannins and smooth the texture, these are all American features which “wow”   domestic audiences in the same manner as Broadway shows impress theirs.

Those accustomed to razzmatazz have a hard time appreciating subtlety, most likely in theater, but certainly in wine. I don’t know if our guest last night will do so. Over the years we’ve had many guests.Some  made the leap, and others didn’t. Actually, I was myself a guest once, back in 1995, coming  to the group with a taste only in California chardonnay. I know how much effort it took for me to accustom my palate to an Old World European aesthetic. It was considerable.

Aesthetics being what they are, there is no right or wrong in liking Broadway plays versus Sheakespeare; nor is there anything wrong in lenience to expensive Napa Cabarnet. Failing to keep an open mind and  explore other worlds, on the other hand, that I do have an issue with. We’ll see if the new guest will disappoint in this regard.

A RECIPE AGAINST LOGORRHEA IN BACK LABELS