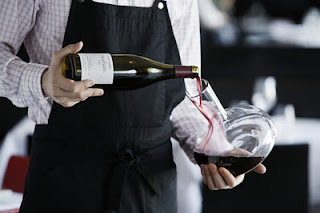 A recent Wall Street Journal article about what it takes to be a somellier contained a number of interesting surprises. The one that especially caught my eye was mentioned as a side issue. Interviewing  a New York City sommellier by the name of Michael Madrigale who works at what I surmise to be a hoity-toity  Upper West Side restaurant called Bar Boulud, the author noted the following anecdote: when her companion asked for a glass of Sancerre while dining there, Mr. Madrigale responded, “Sancerre is the salmon of wines” and directed her to some obscure Greek wine.

I have always felt that there is a difference between the upper-crust East Coast wine world, versus us here in the West. I have never quite pinpointed exactly what this is. Madrigale’s point about the Sancerre has to be one such difference. By declaring Sancerre a boring, ho-hum, routine and safe choice, as salmon nowadays is, this sommelier was declaring a Chardonnay-like acceptance of the wine among his clientele. In my experience it is hardly so.
A better known among the Loire Valley’s various appellations, Sancerre delivers a dry, crisp, fuity version of the Sauvignon Blanc grape with a distinct earthy quality some describe as”chalky” or “flinty”.  It is thus quite a food friendly wine, especially with seafood, and poultry. For those who acquire its taste it can also be a sipping wine, especially in versions now more common, which tone down its earthy qualities and give it a more buttery texture. It nonetheless never comes close to domestic Chardonnay in butteriness and certainly not at all in oak content.
Here in Northern California it is well known among wine aficionados and most restaurant wine lists that feature imported wines have one or two Sancerre labels. However it is definitely not so ubiquitous as to be considered an unadventurous choice. Restaurant clientele remain more loyal to local Napa-Sonoma wines, and many passionate wine collectors are still barely aware of Sancerre, its style being distant than the confines of their wine orbits.
I wonder if New Yorkers have a more even handed view of the wine world, sharing products from California and Europe with equal enthusiasm. This may be an explanation for the implied acceptance of Sancerre in the statement of the sommelier.
I have always noted a tinge of haughtiness in East Coaster that usually exceed those in the west. While all wine snobs carry this quality in abundance, within our snobbish world there is still something objectionable in Madrigale’s statement of Sancerre as “salmon”. If not anything else, it is certainly an insult to salmon, especially for those in yet another region of the U.S., Pacific Northwesters, for whom the fish is revered.
But fear not. The WSJ article goes on to feature a more down-to-earth sommelier in New York City, Rajeev Valdya who says “Sancerre is the most invaluable tool a restaurant can have”, alluding to its versatility in combination with different dishes. The author concludes “salmon is a very popular fish”. In doing so she seems to recommend acceptance of the  choices that masses make. My sentiments exactly.