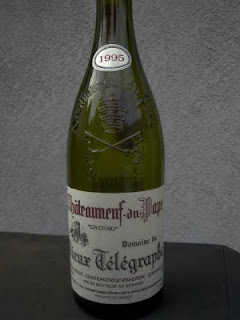 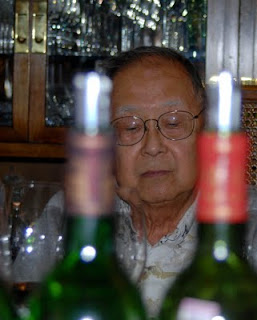 Last night I said farewell to an old friend. It was the bottle you see in the photo to the left, a 1995 Chateauneuf du Pape, Vieux Telegraph. I brought it to my Friday night wine group where it was uniformly well received.
1995 was a good year and last night the wine seemed at its prime. Classic nose for the region, smooth, well balanced, mellow, and yet characteristic smoky flavors and strong hints of mouvedre, which I recognize as an olive tapenade flavor. Without knowing what it was, everyone in the group exclaimed some pleasure as soon as they sipped it. When unveiled they were not surprised. We have loved Vieux Telegraph for decades, long before it became a much celebrated label from this also famous region.
This wine was given to me, along with 5 more, by my friend John Morozumi, whose picture is to the right of the bottle, as a Christmas gift many years ago. John was a medical colleague and then also a wine mentor. Before meeting him in 1991, I was strictly a California chardonnay drinker. Beginning with Christmas that year, he gave me a mix & match case of wine every year. They were from regions I had never heard of, and varietals I had never tasted. Still, it took a while for me to break from the safety of chardonnay and begin a long excursion into the ever widening world of different wines, which John instigated and in which I am still a passenger. Eventually John succeeded in recruiting me to his wine group in early 1996, with which I have been sharing tasting experiences since.
John’s Christmas presents would usually arrive at my office by courier. One year however, he grabbed me in the basement parking lot of St. Joseph’s Hospital and took me to his car. There in his trunk was my yearly case-present. It was gift wrapped. He handed me the case and said, in his usual quiet but emphatic tone, “don’t open these for ten years, and when you do, make sure that I am there!” He was well into his 70’s of age when he said it, and I chuckled at the time. I knew how feisty he was under his calm Japanese facade. “All right“, I said, certain that he would indeed be around when I opened these.
When I got home, I discovered that the case was not the usual mix & match of varietals, but rather six bottles of 1995 Domaine Tempier Bandol, and 6 others of 1995 Vieux Telegraph. I laid them in my then new wine cave, and obeyed John’s admonition.
’95 turned out to be a disappointment in Tempier Bandol, but was spectacular in Vieux Telegraph. I did open some of each in John’s presence after his well instructed hiatus of ten years. The one I opened last night was my final bottle from that batch, and unfortunately John was not there to experience it with us. He died two years ago.
Thus in some way, the unique tasting experience I shared with his wine group, now also mine , was a farewell of sorts to John. But only as far as the 95 Vieux Telegraph is concerned. There are many others that will evoke his memory in years to come. As I stated in his memorial back in February 2009, “don’t underestimate the power of wine as a mortar in solidifying friendships.”