DINNER AND WINE WITH A ROCK STAR, SAMMY HAGAR 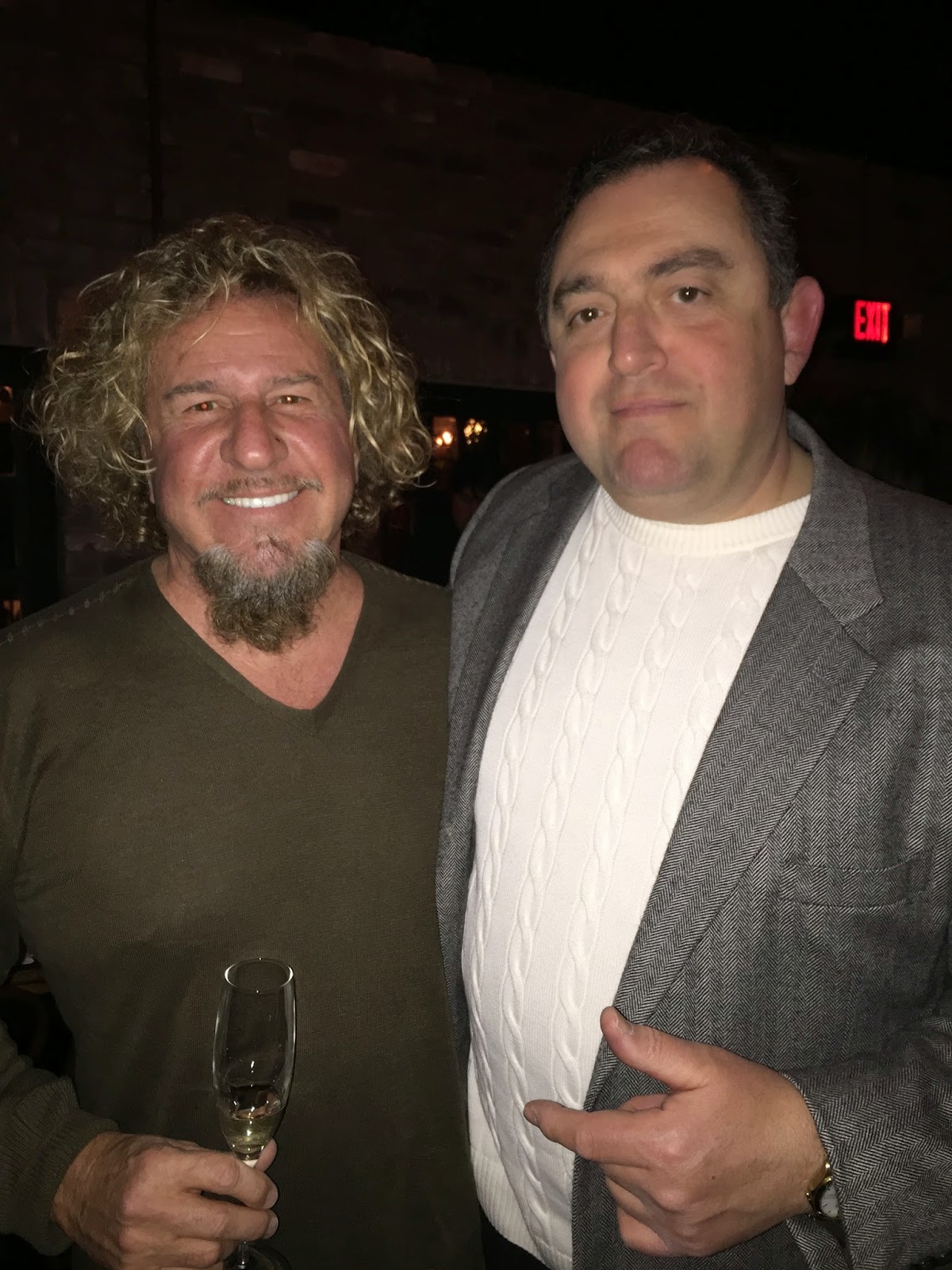 When I accepted our friend Kelley’s invitation to dinner at far away Mill Valley, Marin County, north of San Francisco, including a nearby hotel to stay overnight, I did so because the accompanying wine event peaked my curiosity. I did not count on having dinner with a rock star and his entourage.

It was to be a BYOB (bring your own bottle) Collectors Night at El Passeo, a restaurant owned  by Tyler Florence, whose Wayfare Tavern in San Francisco  I was familiar with. The theme was pre-2005 Chateauneuf du Pape, one of my favorite wines. BYOB may be routine in certain parts of the country – Philadelphia for example – but here in Northern California it is discouraged and resisted with high corkage charges. Intrigued, Julie and I agreed, took an afternoon off from work to drive to Mill Valley and a morning off the next day to return.

I did not realize the scope of the event until we got to the restaurant. It was a Monday night and the entire restaurant was reserved for this event only. We arrived on-time and found the place already full with a festive crowd already imbibing prosecco that was being served as an aperitif. The front room, long and rectangular, dominated with a giant communal table, was already full. A maitre’d offered us the back room, a smaller space, separated from the front by the foyer and kitchen.

“There’s more room there,” he said. “Besides, you can dine with Sammy Hagar.”

“He is here already,” said the maitre’d and pointed to a stocky, wild haired man cheerfully chatting in the front room with a group of guests. He wore a simple light brown V-neck sweater that revealed his middle aged paunch.

We settled into the back room and began opening our wines, 2004 Vieux Telegraph and 2000  Font de Michelle. Everyone had to bring a bottle and share with each other at random. There were more than eighty.

I soon began chatting with a couple of guys at the other end of our communal table when Sammy arrived and headed straight to our group. He was jovial, down-to-earth and very talkative. He told me that he was a wine enthusiast and that he part owned El Passeo. He loved these monthly Collectors’ dinners and even though Chateauneuf wasn’t his thing, he was looking forward to this one.

“How many bottles of wine do you own?” I asked.

“Fuck, Sammy!”  I said. “You’ll never drink that in your lifetime.”

He laughed. I wanted to know what his favorites were. He told me his collection was mostly California, you know, the usual. I didn’t.

I hit him with one of my favorite questions.

“If you were stranded in a desert island with a case of wine what would it be?”

He looked at a bespectacled man with a graying beard who was next to me and they smiled at each other.

Yo, I thought, this guy is way above my pay grade.

He then told me that they had held an old Burgundy tasting with the same format a while back,  and someone brought an old Romanee Conti. It was spoiled.

“Can you believe it?” he said laughing. “Ten thousand dollar bottle and it was no good. The guy was pissed.”

He then threw my question back at me, about the desert island. I didn’t hesitate.

Sammy looked at the bearded guy still next to me and asked if it was any good. I was later to discover that this guy was his wine guru, a professional grower who was incredibly knowledgeable about the subject. The guy hesitated, hemmed and hawed.

A very pretty, well made up, statuesque woman, taller than Sammy appeared. He introduced her, Katie, his wife. She was more formally dressed compared to the simple garb  her husband wore. Soon the back room filled up with Sammy’s friends and business associates.

Dinner was a four course affair, mostly heavy red  meats befitting the Southern Rhone theme. Included was foia gras, recently legalized in California just a few weeks earlier. Tipsy by the time it was served, I stood up and proposed a toast to its return. I received massive cheer and applause. Could it have been more than at a Sammy Hagar concert?

Then several people came to me and offered me theirs, sliding little pieces of liver onto my plate.

I didn’t spend more time with Sammy because there were countless old Chateauneufs to sample, many Beaucastels, Jannasse, Rayas, Pegau and more. Vieux Telegraph was rare. This was not a Kermit Lynch crowd. I was in Chateauneuf du Pape heaven and that’s what counted the most.

Unfortunately it was all too much. The atmosphere was friendly and festive, the restaurant abuzz with noise and smells. It was not the sort of event in which you go around with a spit bucket and take tasting notes. As my blood alcohol level rose, I soon abandoned any attempt at distinguishing nuances and resigned myself to sampling and conversing. So did everyone else.

We stumbled out of the restaurant early, after bidding farewell to Sammy and several members of his group  we had become friends with. We were glad we had reserved a hotel nearby, a short walking distance, for that was all we could do, having filled up with more Chaeauneuf than I had seen in my lifetime.

When I eventually returned home, I logged on You Tube and listened to Sammy Hagar’s music for the first time ever.