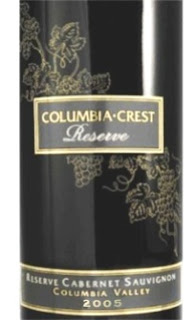 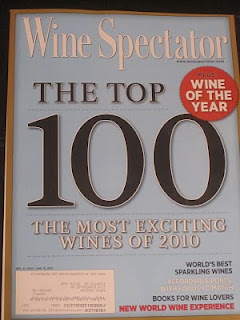 Certain practices in wine pricing defy logic. We all know numerous examples from restaurant pricing to auctions in ancient wines, to stratospheric prices of celebrity labels. Some however are so incredible as to classify in the “crazy” category. If you recall my blog about the $ 12, 000 bottle of Ch. Petrus in a Vegas restaurant, that turned out to be $2000 more expensive in another across the Strip, now that was crazy with a capital “C”. Presently I find another that in my book classifies within this range.

As you can see from the picture to the right, it is that time of the year when various publications come up with rank orders of their “wines of the year”, the Wine Spectator being in the lead. How one picks and arranges 100 labels out of the tens of thousands out there, into a numbered rank-order, itself defies logic. But they do. Their readers must love such rankings. I suspect all humans do. The process is no different than awarding Oscars or Grammy’s, and we all know how misplaced some top choices in these areas can be. When it comes to subjective experiences like art or wine, objectifying it as though it was a sports league makes no sense. Still, people want it done.

I have been reading the Spectator’s Top 100 list now for over ten years, and I must admit, I have to repress a certain excitement when I find a wine I own in the top 10. Last year the 2007 Vieux Telegraph Chateauneuf du Pape made it into that rarified bunch only a few weeks after a case of it arrived in my garage – at an outrageous price I must add. I felt good about having dished out those bucks for what was in the past a much cheaper wine when I saw its ranking. All my so called “logic” about numbered rankings went out the door.

O.K. Now that we have established my occasional susceptibility to get suckered by the Spectator list, onwards with my observation within their Top 100 article which made my eyes pop out of their sockets. It was something the magazine has done for the first time since I have been reading these lists. On page 69, they published a 20 year retrospective on what happened to their #1 picks from 1989 to 2009. As you might have guessed many had increased in value. For example the 1990 Ch. Latour, their #1 of 1993, went from $80 then to $793 now. A believable appreciation in a First Growth Bordeaux, that serves not only as an alcoholic beverage, but a bona-fide investment akin to stocks and bonds. A more recent #1, a relatively obscure wine catapulted into fame was a 2001 Paloma Merlot from Spring Mountain, their #1 choice in 2003. This one went from $45 then to $88 now. Also believable? Sure.

Now here’s the absolutely crazy one: last year’s #1 was a 2005 Columbia Crest Cabarnet Sauvignon Reserve. It retailed for $27 then. This year, according to the Spectator it has gone up to $165! A 6-fold-plus increase in 1 year for another obscure wine, almost competing with the nearly 10-fold increase in the Latour over 17 years. For a one year appreciation it has to beat some kind of record somewhere. What’s going on here?

Well, to me it’s obvious. The Columbia Valley of Washington State is not exactly on the lips of most wine consumers as their top two or three wine-growing regions they buy from, that is unless they live in Washington or a nearby state. The Spectator put Columbia Crest smack within the center of the wine-buying radar screen with their #1 proclamation and created a sudden rise in demand, mostly from those who I bet never heard of it before. The rest is “supply & demand” at work. Actually when I researched the wine on the Internet, I found sites that were selling it for as low as in the $90-125 range. The Spectator’s estimate might be a bit inflated. Nonetheless it does not change the fact that a humble bottle of cabarnet, albeit a decent one, suddenly, overnight became a sensation and achieved cult prices, simply because pundits at the Spectator proclaimed it to be #1. The quality of the wine did not increase 6-fold in one year; it’s image did.

The ultimate irony of this good fortune to befall upon Columbia Crest is that, in my opinion, the Spectator chose a humble wine with an equally humble price last year as their #1 for a good reason. We were in the middle of a recession, wine buyers had mass migrated away from expensive labels, many people were in genuine financial pain. The magazine wisely decided to pay lip service to a “value wine” in order not to appear elitist in such hard times. And what happens a year later? Their unpretentious choice becomes a luxury celebrity. Don’t blame the magazine for this craziness. It it us, wine snobs of the world who care about magazines like the Spectator, originating such lunacy.