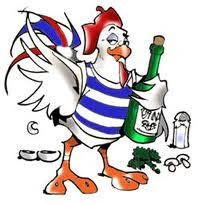 Marital disputes are fortunately rare in my household. A recent one arose over an unusual subject: coq au vin.
My wife Julie loves this dish and orders it whenever it’s listed in a menu. Recently she decided to make it at home. This is a French Burgundian recipe of chicken, slow cooked with a bunch of vegetables in a broth. Like countless other recipes from Europe from ciappino to paella to goulash, this probably started as peasant food which has now been elevated to the staus of high cuisine. In this case however, the recipe calls for a whole bottle of Burgundy to be poured in. A dispute arose when Julie asked me if I had any Burgundy I could spare for dinner?
“Are you kidding?”, I said. “Do you know how expensive Burgundy is?” . Besides, I swore I would not buy any more Burgundy many years ago after realizing the dramatic mismatch between quality and price in these wines. Still, I have a couple of cases in my collection and I would be damned if I would allow them to be used as cooking wine.
“I can give you a nice bottle of Barbera”, I replied.
“Where’s that from?”, she said.
“Italy.”
“How would the French feel if their recipe was messed up with Italian wines?”
Good question!
“Well, it’s actually not Italian. It’s domestic, from Sonoma.”
Bad answer!
I don’t think Julie realizes that Barbera is my least favorite wine. The Italian ones are bad enough. Domestic versions of this grape are even worse, the worst that the wine world can offer to hapless explorers. Why I bought a couple of Sonoma Barbera can probably be the subject of another blog. Suffice it to say that I was in a depraved mood when it happened. Now, occupying slots in my on-deck circle, these bottles could easily be sacrificed to the fumes of a coq au vin cooker.
Julie didn’t buy it. In the end we reached a compromise and our marriage was saved. It was a cheap domestic pinot noir from Russian River, Cazar. “What’s Burgundy?”, she asked. Has she actually attended wine group with me all these years? “Pinot noir”, I said in disbelief, and she was sold on the Cazar. I was relieved for having saved my Chambolle’s and few Nuit St. George’s rescued from the noose of the coq au vin execution.
The end result was delicious. To hell with French restaurants. Julie’s was good enough to beat any of them. We had it with a bottle of Gigondas. Rhone, but rustic and good enough to complement the peasant origins of both.
Now I needed to learn the truth. Does one really need to use a specific wine in a cooking recipe? I called Dave Cook, a local talented chef who specializes in French recipes. He confirmed what I suspected. No, it does not have to be Burgundy. The wine added is not recognizable as it would be if it were being blind tasted after it’s cooked. But he did have a pearl: whatever you put in there should be fruit forward and you have to mind the sugar. Because in the process of reducing it as the coq au vin evolves, all that will be left is the fruit and sugar. Dave thought that a cheap domestic pinot was an excellent compromise.
There you have it. It is difficult enough to predict what a given wine will turn into in years to come. How it will taste cooked and reduced is a subject I would rather leave alone. Leave my expensive stuff alone, and I’ll be happy to devour the end results.