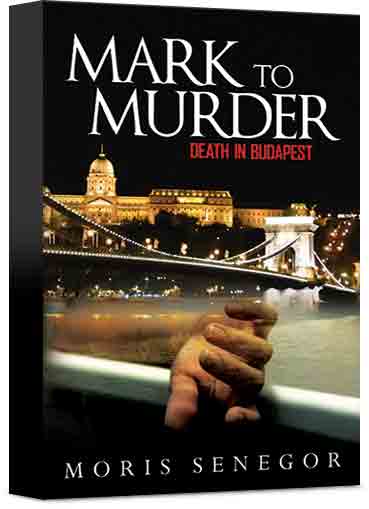 Mark to Murder: Death in Budapest

Mark Kent has come to Budapest at the urgent—and mysterious—written request of his childhood friend from Turkey, Ahmet, whom he lost touch with years earlier. Mark had immigrated to the States, where he became a radiologist in California. Ahmet disappeared into eastern Europe, involved in various shady dealings, as Mark discovers, and with too many women.

In Budapest, Mark discovers his friend murdered in the Royal Suite at the Gresham Palace. The bloodless scene leaves Mark, a doctor, baffled. But he’s determined to find out who killed Ahmet, why, and how.

Mark’s life becomes a kaleidoscope of hit men, spurned women, and detectives who raise as many suspicions as questions. And who is this skulking figure trailing Mark—friend or foe?

When an attractive young Hungarian policewoman named Jasmin decides to help Mark with his investigation, he soon realizes that she has other motives as well. Mark finds her irresistible—yet knows that he must resist her.

The story’s climax takes place in one of Budapest’s public bath houses. Just when Mark thinks he’s put the many pieces of this deadly puzzle together, there’s yet another twist. And in the end, he must turn, once again, to Jasmin.

“Like our hero, I was born in Istanbul and went to the English High School there. And like Mark, I landed in San Francisco, in medicine—as a neurosurgeon, rather than a radiologist.

In reminiscing with some Turkish friends about our days at the high school, a number of them asked me to write about that time. The improbable situation Mark finds himself in is sheer fiction, but his many flashbacks to his adventures with Ahmet when they were young boys do paint an accurate picture of what Istanbul was like in the 1970s—the riotous soundscape, the tiers of social classes, the many small neighborhoods.”   — Moris

A few words, oddly scribbled on the back of a radiology report, send Dr. Mark Kent, a California radiologist, back to the Old World, to a place he has never been for a reunion with a schoolmate he lost contact with years ago.

The schoolmate’s business dealings, and a complicated amorous history, put Mark’s life in jeopardy and he soon becomes a target of risk by association. The author takes the reader through a tour of an ancient mid-European city, from glittering architectural splendor, elegant dining venues (with a sampling of regional culinary delights) and a twenty-first century bathhouse to gritty, odorous back rooms at the city market and a greasy mechanic’s workshop. Mark to Murder is a skillfully told tale that leaves the reader hoping for more.
More Reviews