Another secret revealed. Bay Area life is an endless series of such predicaments. 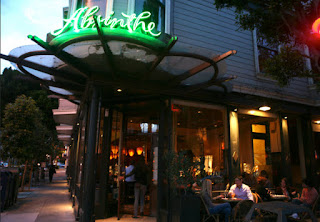 Beginning in the late 1990s, when we had Wednesday night subscriptions to the San Francisco Ballet and Symphony, we had only one go-to restaurant. Located in the Hayes Valley, Absinthe, which opened in 1998, was a touch of Paris not only in food and decor, but also because it was one of a few that served late dinners beyond 10 p.m. We quietly enjoyed its cassoulet, seafood, and duck confit with bottles of Chablis or red Rhone while eavesdropping on nearby conversations among dancers or musicians whom we had just seen. They, like us, also favored late dinners. Julie and I considered Absinthe our own little San Francisco secret, a hidden gem.

Then its name appeared on Wine Spectator.  “Oh, oh!” I said when I read it. Was the secret out?

The issue featured an annual listing of the best wine lists around the world. I reassured myself Absinthe was one of hundreds in that list, that maybe it would escape notice. But then, soon afterwards the magazine actually featured the restaurant, with photos and all. Absinthe was on its way up, also reported in other media. We quit going there. 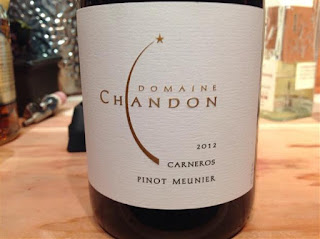 The same has happened with wine. It began with the most secret of secrets, a Pinot Meuniere from Domaine Chandon. They made a small batch of still wine from this grape that is usually blended into sparkling wine. It was as good as any fine Burgundy. In those days, before  Pinot Noir became hip, the wine was a bargain at around $9 per bottle with a case discount.This wine was not done in by magazines or newspapers, but rather by its creator. Recognizing that it was becoming popular, Domaine Chandon changed its composition, converting it to a high extraction, over oaked Pinot Noir lookalike and charging exorbitant prices for it. The secret was no longer worth sharing.

Now comes the newest issue of Wine spectator with an article by James Laube, their high-end Napa columnist, entirely devoted to Arista, one of my recent favorites. 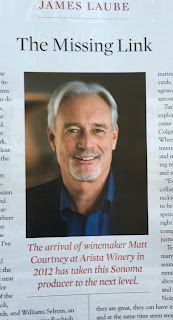 Located in the Russian River Valley, founded in 2002, Arista makes several varietals, Chardonnay, Zinfandel, Alsatian style Riesling and Gewurztraminer, but it is best at Pinot Noir, the flagship varietal of the region. We first visited this winery in 2010 as we rode our bikes inland from the ocean, encountering the property off Westside Road, not far from Healdsburg.  We discovered a treasure trove of fine Pinot Noirs for which we developed a special affinity. 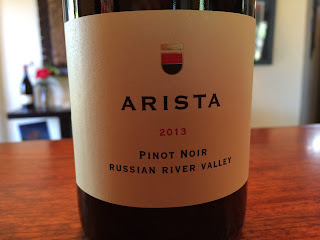 Currently they offer this varietal in their basic line-up from different regions including Anderson Valley, Mendocino, Sonoma Coast , Willamette Valley in Oregon, and their best and priciest, Russian River. These are in the $35-45 price range. They also feature numerous special vineyard pinots, their reserve wines, most $70 or above. The wines are smooth and elegant, with seductive, fruity noses, various levels of extraction, all higher than typical Burgundy, some featuring smoky, spicy flavors.

Arista doesn’t have a wine club. Instead they offer a first right of refusal to  select clients who place themselves on a list, offers being made when the wines are first released. For those interested it is well worth it, for otherwise, if purchasing at the winery, they are often out of stock.

James Laube, an unceasingly elitist name dropper – both with uppity wines he samples and wine country celebrities he hobnobs with –  had a different take on Arista, pointing out how much its wines have improved since the arrival of a new winemaker in 2012, well minted after training under various names Laube likes. I generally dislike Laube’s column and often just skim over it. This time I was particularly taken aback, not by its content but by its revelation.

“Oh, oh!” I went, as I did years ago when Absinthe was revealed. There goes Arista.

I saw visions of over $100 Pinot Noir in its near future, already a reality in other labels that hover in rarified circles.

But then I managed to comfort myself with the knowledge that as with restaurants, there are numerous wines in bottom strungs waiting to be discovered on their way up. Just as I abandoned Dm. Cahndon and Absinthe, if I must, I’ll do the same with Arista, moving on to others.

A PAIR OF AMAZING CHEFS IN A HIDDEN GEM