ANOTHER INSANITY IN THE WINE WORLD 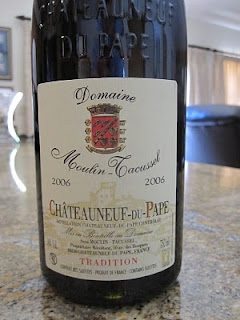 The bottle of wine you see in the picture was on sale for $20 at K&L Wines in San Francisco last weekend. So what?
This is a bottle of Chateauneuf du Pape from a good vintage, 2006, and its former price was around $40. Chateauneuf du Pape is the crowning prince of the Southern Rhone and commands high prices. I don’t think I have ever bought a bottle from this appellation at that price in the last few years. Needless to say I asked a clerk at the store what the was going on. His reponse gave me an epiphany about yet another form of insanity in the wine bussiness.
For those of you who follow my blog you may recall that my first report of insanity was that of wildly varying and astronomical prices for the same wine in Las Vegas. This new one I discovered at K&L is not quite as out-there as Vegas, but nonetheless still surprising.
It turns out that not just this Chateauneuf but many others from 2006 are on sale because there has been such an incredible hype about the 2007 vintage in this region, that it is driving down sales of its predecessor, both already on store shelves. So, many distributors have decided to cut prices and move the 2006’s off the shelves.
Since when has wine come to be treated like cars? New models are in the showroom, move over older ones. Remember the sales for a given model year that would be invariably announced around September to make room for the new models by the end of the year? This was before the crash of the auto industry. I am sure they will restart when the big brands recover. But wine is different. Planned obsolescence has never been a feature of wine marketing. In fact, for collectible appellations like Chateauneuf Du Pape which come from good, ageworthy vintages, there is no such thing as obsolescence until decades later when the wines get over the hill.
“Why are you complaining?”, you might say; after all their own marketing mishap is our bonanza as consumers. yes, you are right. But I cannot believe that all those supposedly smart people out there marketing wines can trip over their own feet, and bruise their faces in this fashion, in effect belittling the reputation of a good batch of wine because they proclaim another so much better and losing profits in the process.
This same phenomenon also occurs in Bordeaux, but usually the wines on the shelf that go on sale tend to be from lesser vintages. For instance the much maligned 1997 vintage was subjected to such deep discounts after the proclamation of divine greatness in 2000, that you could buy First Growths like Chateau Haut-Brion for around $70 or 80, and I did. I do not know any similar occurrences in the domestic wine bussiness. Appellations such as Napa wisely avoid prominent public discussions about vintages like what you get from France or Italy. They try to present every vintage as equally good, itself a fallacy, but maybe this avoids marketing mishaps like those of the 2006 Chateauneuf.
As fine wine has become more and more expensive, it behooves us to take advantage of any anomaly in the system for bargains. There you are. Happy hunting for the 2006’s.
Moris Senegor