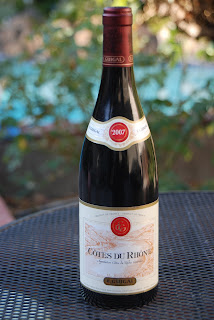 In current times we seem to have a never ending litany of complaints about wine prices. The outrageous rise in many prices reflects increased demand for the drink, which here in the U.S. is booming like never before. Trendy regions like Napa, varietals like pinot noir, and numerous luxury labels all command eye-popping amounts. Even not so well known wines have been caught up in the avalanche. Recently I was shocked to see Heitz Grignolino Rose, a summer staple from a well respected Napa winery, more famous for its Cabarnets, which we used to guzzle at $8 per bottle a decade ago, carrying a $18 tag. When I expressed my surprise and dismay, the wine store owner laughed and said something to the effect that my emotions demonstrate what a “veteran” I have become in the wine world. A backhanded compliment? Who knows.

It was thus even more shocking to discover a wine, a really good wine, at an amazingly reasonable price. It was none other that the current Cote du Rhone from E. Guigal, a well known Rhone negotiant who has delivered value and luxury reliably for decades. His 2007 bottling is being sold for $ 11.99 at K&L in San Francisco. I tried one myself, and subsequently brought another to my wine tasting group, and we all agreed that for the price, the quality it delivers is amazingly good.

Cotes du Rhone is an enormous appellation, some 200 km. covering a region that extends into its Northern and Southern subdivisions. It is a lowly label as compared to other gentrified counterparts such as Hermitage, Cornas or Chateauneuf du Pape. There are countless wines made under the Cote du Rhone label, some good, some not so. The really good ones within this appellation however can be great bargains, especially in restaurant wine lists, where outrageous prices take on a greater dimension of their own. The reds from the region carry the usual mixture of various varietals such as syrah, grenache, cinsault, picpoul, mouvedre and many others.

The house of Guigal, in bussiness since 1946, is known as a “negociant” bussiness in France. Negotiants are merchants who buy grapes from smaller growers and assmeble them into their own wine. Some also grow their own as an additional source. Other well known negotiants include Louis Jadot (of Beaujolais & Burgundy fame), Joseph Drouhin, and Georges Duboeuf. Guigal came to international attention in the 1980’s when wine critic Robert Parker heaped high praise on his Cote-Rotie. The house bottles under numerous high and low end labels. Don’t look for bargains in the likes of Hermitage, Cote-Rotie, Chateauneuf du Pape and others in the Guigal line up.

The good buys will invariably be in the Cote du Rhone label. What makes this bottling so special is that 2007 was a famed vintage in the region, one of the best in recent times. Prices for the high end Rhone labels shot up dramatically, in proportion to the hype 2007 received. I should know, for I bought countless cases of 2007 Rhones, and was personally affected by the sticker shock some displayed. This is what makes the $11.95 price of this Cote du Rhone all the more sweet.

I can announce, with some glee, that before I let the rest of my friends and readers in on this little secret, I made sure I bought not one or two, but three cases of this wine. I have never bought three cases of anything before. Now it’s time for you to look for it. Such deals are rare in current times, and between the vagaries of exchange rates, vintage variations, and wine demand, unlikely to repeat themselves in future years.