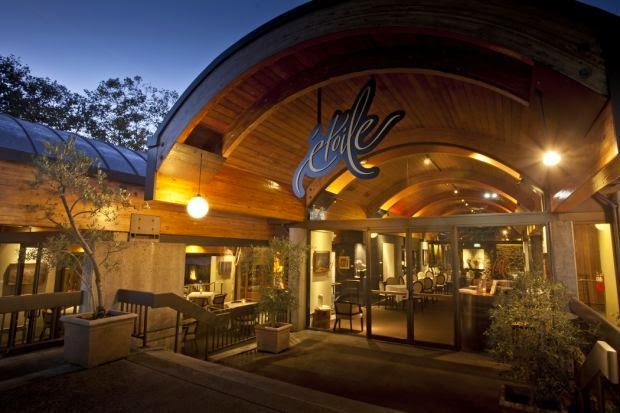 An old friend just passed away. Etoile Restaurant in Yountville is no more.  It was Domaine Chandon’s elite restaurant for decades, a pioneer in Napa Valley fine dining when the area was still a rural backwater. I had various personal memories at Etoile, an early foray into Napa dining, a first date with my second wife, numerous commemorative visits thereafter.

When the storied champagne house Moet et Chandon decided upon an American outpost, they went all out and included a fancy restaurant in its grounds, a rarity then with wineries, as it is now. Etoile opened in 1973. Initially under chef Udo Nechutnys, the restaurant swiftly became an icon of Bay Area fine dining, then enjoyed its zenith for two decades under Phillipe Jeanty. Both chefs are still in the area, the former at Auberge du Soleil, and Jeanty, a stone’s throw away, on the east side of Highway 29 at Bistro Jeanty, a restaurant we have also frequented, usually in sweaty bike clothes after weekend rides in the Silverado Trail.

Etoile was no sweaty biker place. I first experienced it in 1989 as an elegant dining room with small, sparsely decorated tables, a tall thin  vase of flowers on sparkling white  tablecloth, no plates, no silverware. A bevy of assistants and busboys subsequently placed and cleared enough china and silverware for an army, with timely precision. A formally dressed yet informal waiter recited menu explanations with Shakespearean flair tinged with a touch of The Castro. There was never any question as to what aperitif to order. Why, of course, a glass of their fine champagne!

I don’t remember the food much, the evening being more a fairy tale event, fitting of princes and fair maidens, the final bill fit for kings. Some time toward the end of our meal we were blessed by a visit from the sous chef, my wife much excited by the event, cheerfully chatting with the young man. A what? The word is pronounced like the Turkish word “su”, water. My God, I thought, they even have a chef for water. No wonder it’s so expensive.

Years later Domaine Chandon moved into still wines, more lucrative than champagne, and made an amazingly good Pinot Meuniere that we often confused for a grand Burgundy in my then new wine group. We used to assign a member to drive out there and buy a few cases to be distributed among us.

It was on such a Meuniere run that I had my first date with Julie, my current wife, in December 1997. We had lunch at Etoile after I bought my cases. Napa is charmingly bare in winter, devoid of tourists, thinly populated, cold and rainy, autumn leaves falling off near naked vines. Fireplaces are on everywhere. It is never winter there in the holiday season, more like a Midwestern autumn. Julie had never been to Etoile and enjoyed it very much. At the end, after polishing off a creme brulee, she turned her pretty blue eyes at me and, flirtatious and full of champagne, said,

“I’d like to see that,” I replied, hoping our waiter was not within earshot.

I did, in a manner of speaking, for years to come. We returned every year in December to commemorate that first date and had new Etoile moments, like the time they presented millefeuil in their menu and I explained to Julie what a proper millefeuil was, the pastry a staple of my childhood from  fine patisseries of Istanbul. The dessert they brought, a phyllo dough concoction, bore no resemblance to the real thing. Noticing our puzzled faces our waiter asked us if there was something wrong. No, we said and dutifully picked at the alien thing.

When Domaine Chandon discovered the popularity of its Pinot Meuniere and released an over-extracted, over-oaked version that turned it into run-of-the-mill Pinot Noir, I complained to their sommelier in yet another December luncheon. It resulted in several free samples of our newest and best, I am sure you’ll love this. It was the same adulterated stuff.

We preferred to stick to  Domaine Chandon’s Brut at Etoile, always a good value, despite increasingly inflated wine lists.

Then at some point we quit going. Too far to drive and drink, too busy with other activities. It appears that so did others. French cuisine ceased to be a flagship of fine dining in the Bay Area and Etoile went the way of Masa’s and Fleur de Lys, other stalwarts of the genre in San Francisco. Chandon will turn the space into a tasting room, as if Napa needs more tasting space.

And so we bid adieu to Etoile, and remain on the east side of Highway 29 in Yountville where new, world famous restaurants have populated the landscape. The village is now a major tourist destination and world-culinary capital. Memories of the west side however, at Etoile, will always remain.

THE JOYS OF SPITTING