A UNIQUE DINNER WITH OLD BORDEAUX 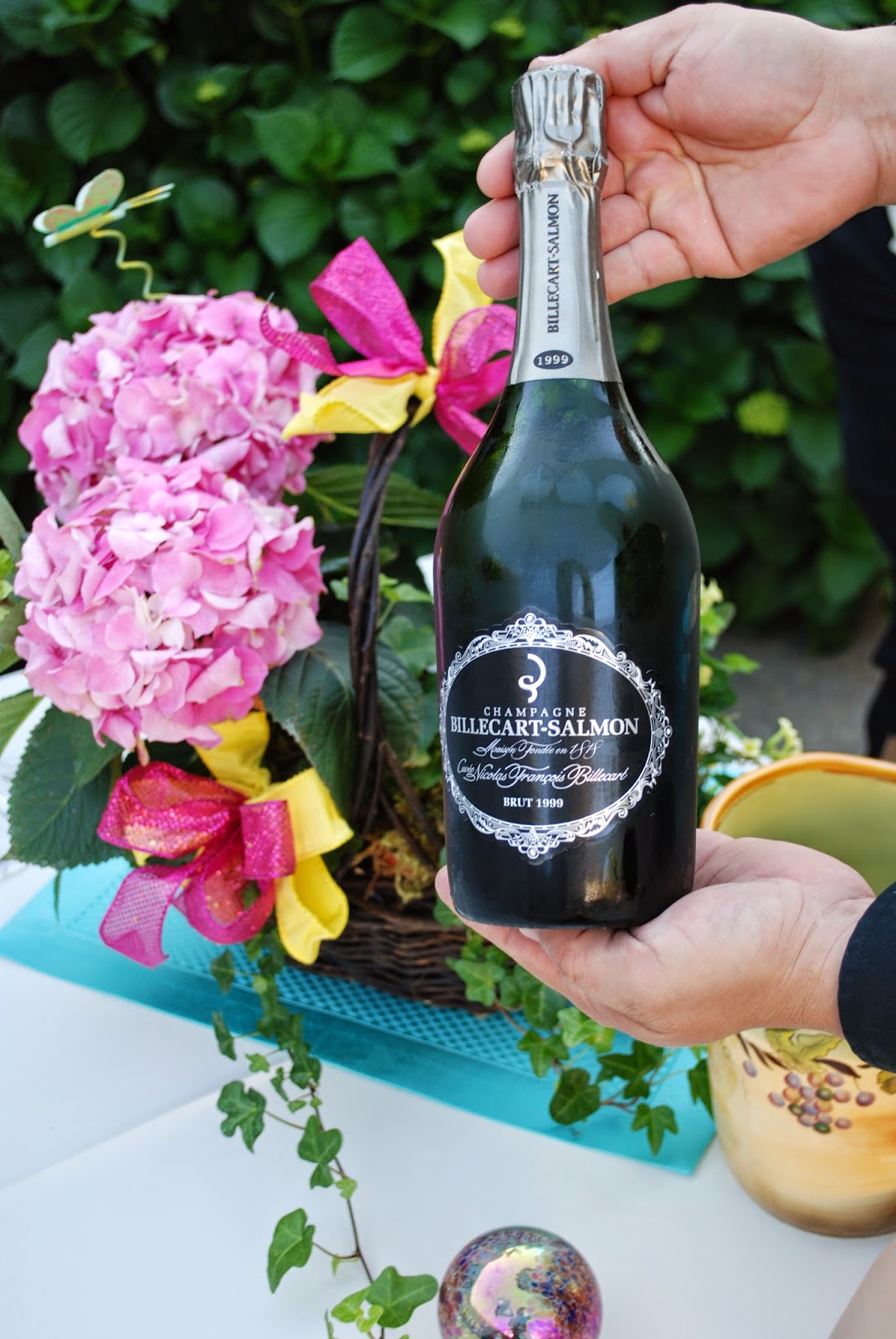 We opened the outdoor evening by the poolside with a 1999 Billecart-Salmon Brut, one of four 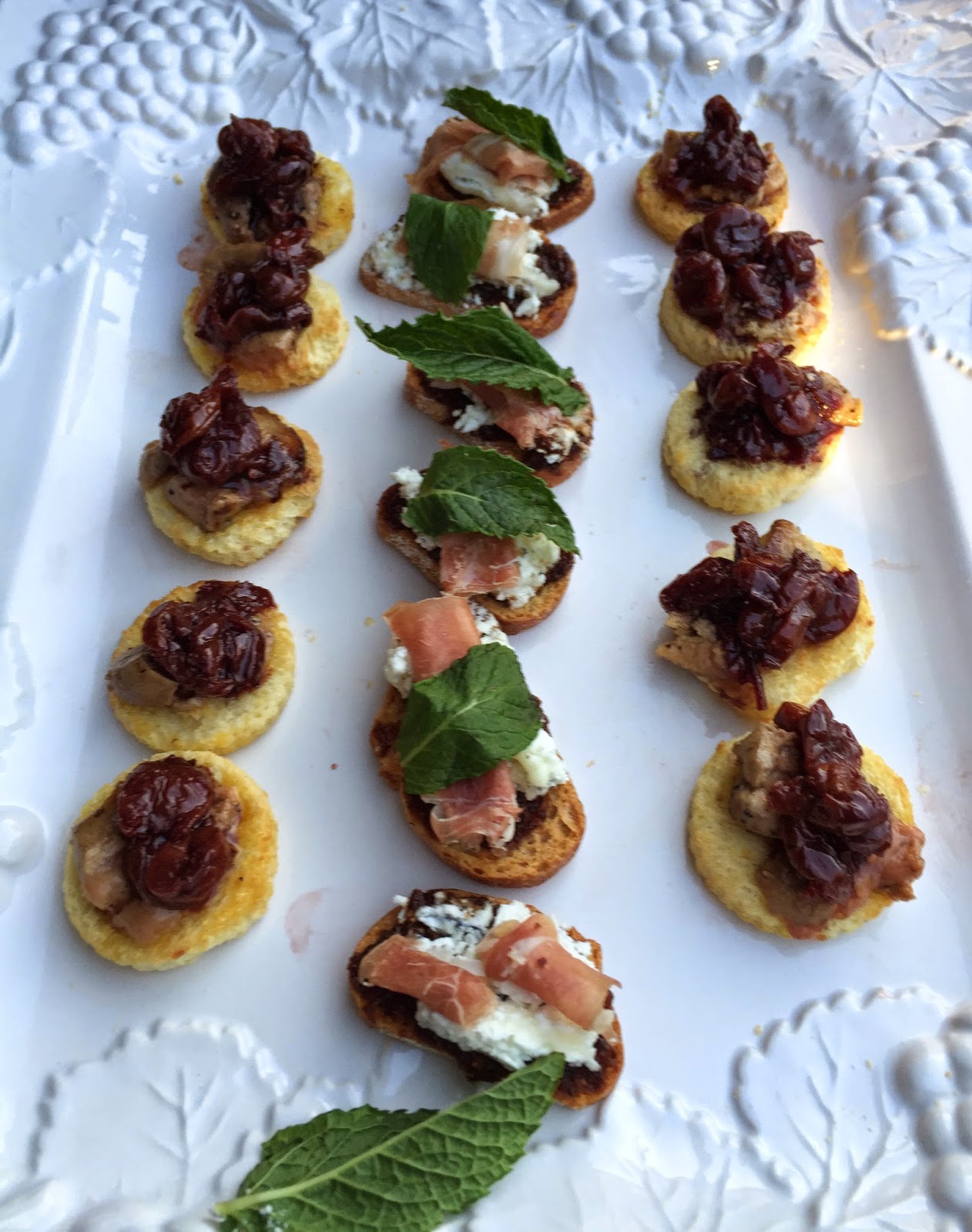 champagnes our guest Alan Cooper brought. It was dark hued, bubbles scant, but still crisp and fruity, a bit nutty, well balanced.  By the time all ten of us congregated around the table with an ice tub for the champagne, our server began offering an appetizer of prosciutto with goat cheese and fig jam on mini toasted baguettes, each topped with a mint leaf that added a special tang to their flavor explosion. There also was seared foie gras with cherry compote  on  mini brioche, divine with the champagne. By now two additional bottles were popped, a non-vintage Krug and Gusbourne, a British champagne, both quite good. I worried that we had begun with too much, for on a nearby table stood an array of special reds, the best group old Bordeaux ever assembled in my place, the honored guests of the evening.

When my friend Steve Cottrell announced that he had acquired an sizable wine collection that contained old Moutons and Latours and offered to open some, I did not hesitate to volunteer a dinner to accompany these. After much discussion and planning, after procuring a new caterer when our first one cancelled out, after laborious clean-ups, decorations and table settings, here we were for this much anticipated evening.

I invited Steve inside, to our kitchen where we had a quiet tete-a tete near steaming pots of oxtail ravioli, to discuss the sequence of wine to be served. He suggested we begin with the oldest ones first, 1961 Chateau Branaire-Ducru and 1970 Chateau Latour for a pre-tasting and a 1982 Chateau Mouton and 1986 Chateau Palmer as accompaniment to the ravioli. All that for a mere amuse-bouche? I wondered. 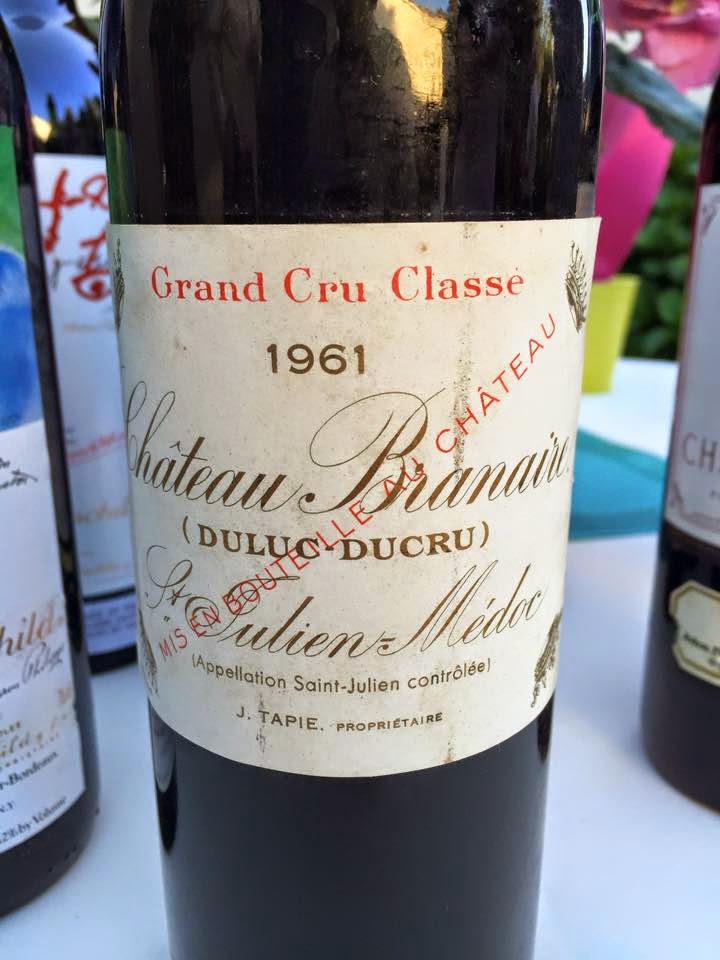 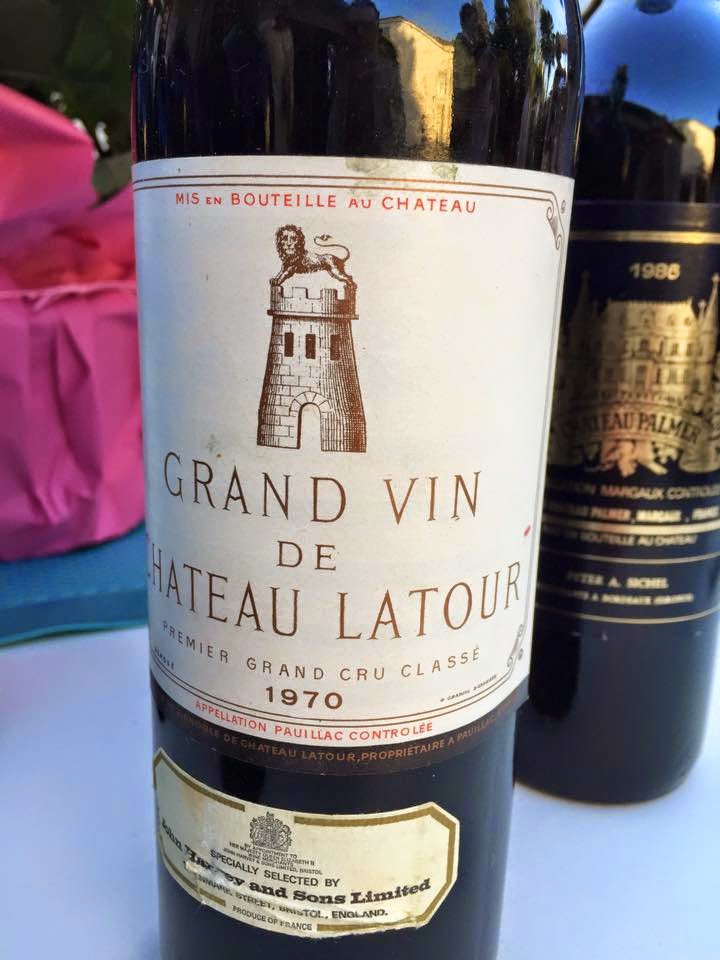 The oxtail raviolo was not a tiny spoonful of fancy something. It was a single, round colossus on a bed of Bordeaux reduction generously filled with meat, a major highlight of the dinner. So were two wines we opened, the ’61 and ’82. The 1961 Branaire was slightly murky and pale, and carried a hint of raisiny, old flavors in the upfront palate; but it was smooth, mellow and well balanced and still carried good fruit. I expected it to last no more than a half hour after uncorking but it went much longer than that. The 1982 Mouton was simply divine. It was smooth, nuanced, very much alive with fruit, well balanced, with light alcohol (those good old days) and good acidity. The 1970 Latour was also good and had we tasted it alone we might have appreciated it more. So was the 86 Palmer, a more fruity wine, younger but a bit off balance. 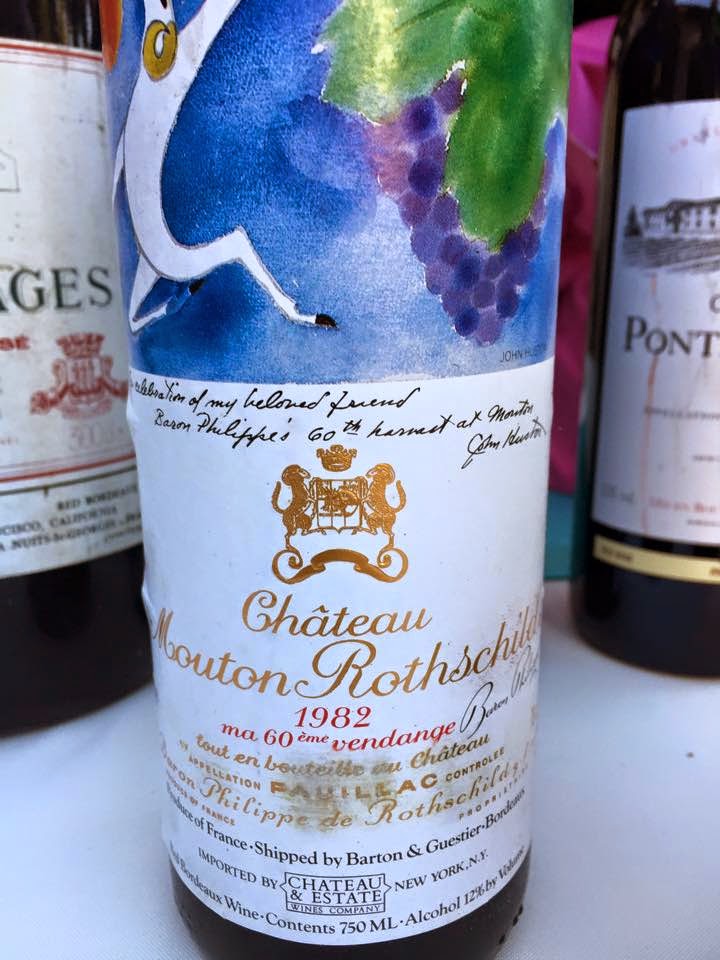 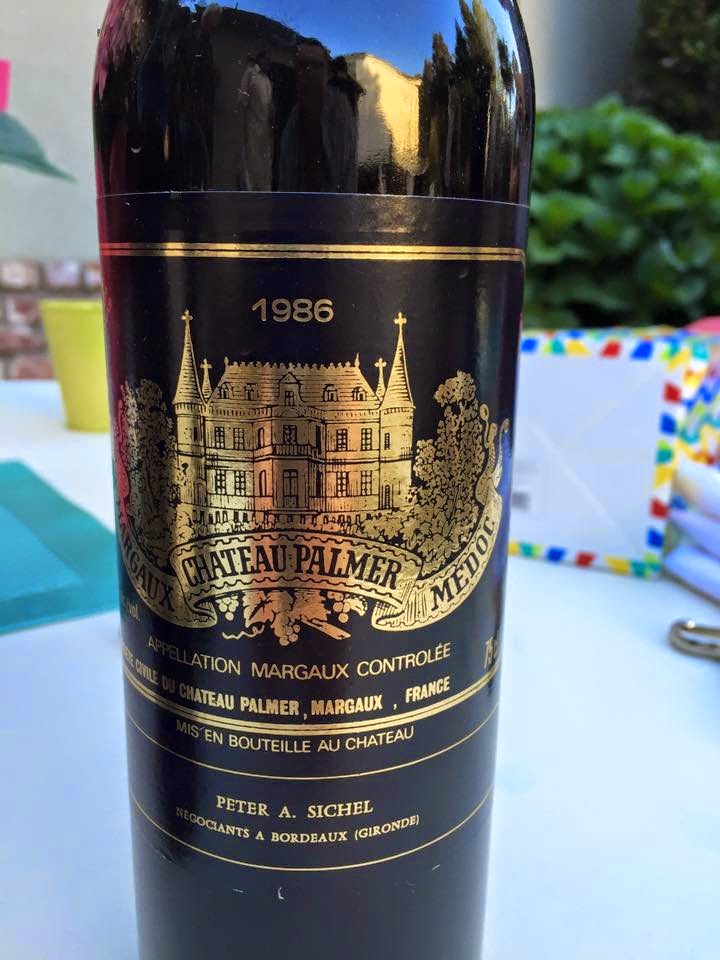 We made the most of our ravioli as dusk settled on our large table, marveling at the open bottles and how we were uttering phrases like, “I’ll pass you the ’82 if you wouldn’t mind passing the ’61.” 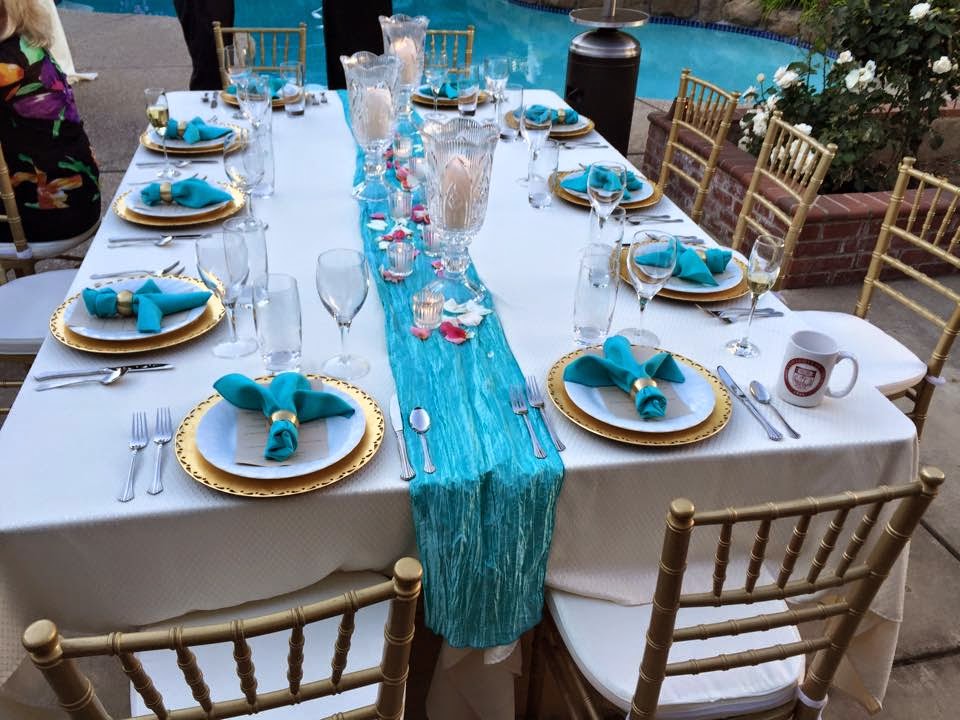 Julie had set the white tablecloth with a strip of light blue ribbon down the middle that extended the nearby swimming pool into our dinner table. Steve sat at one end with his wife Mandy, I at the other with Julie. As the ravioli disappeared Steve and I gazed at each other with mutual nods of approval
for how it was going so far. He then asked me for some decanters. 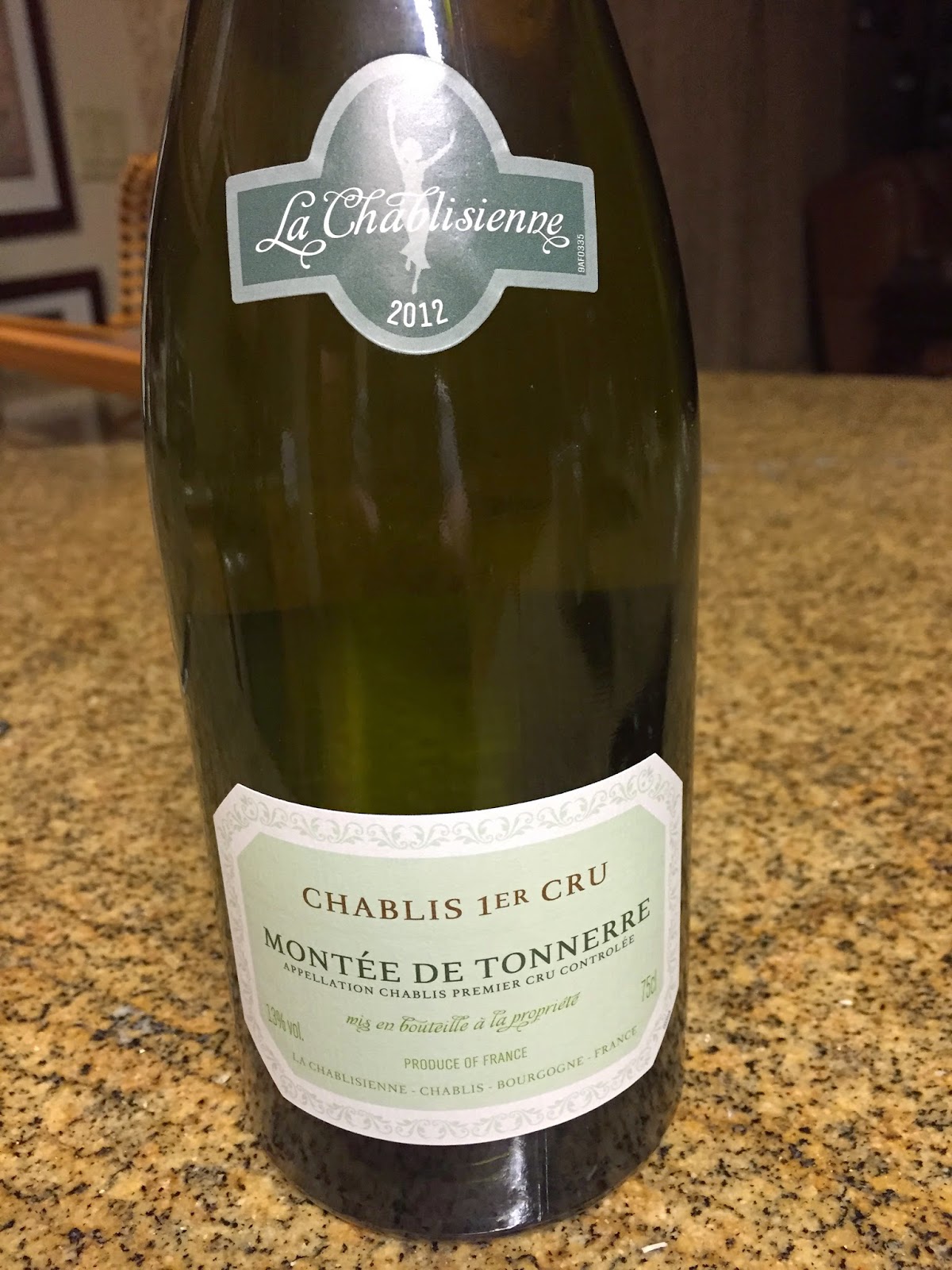 As the waiter began serving our  strawberry-orange arugula salad with pistachio and ricotta and citrus balsamic vinaigrette, I quickly uncorked a 2010 Hanzell Chardonnay and 2011 La Chablissienne Montee-de-Tonnere Chablis 1er Cru. They went well with the salad which featured sweet and tart flavors. Much would be left-over however,  as the evening was about reds, the whites making only a cameo appearance. 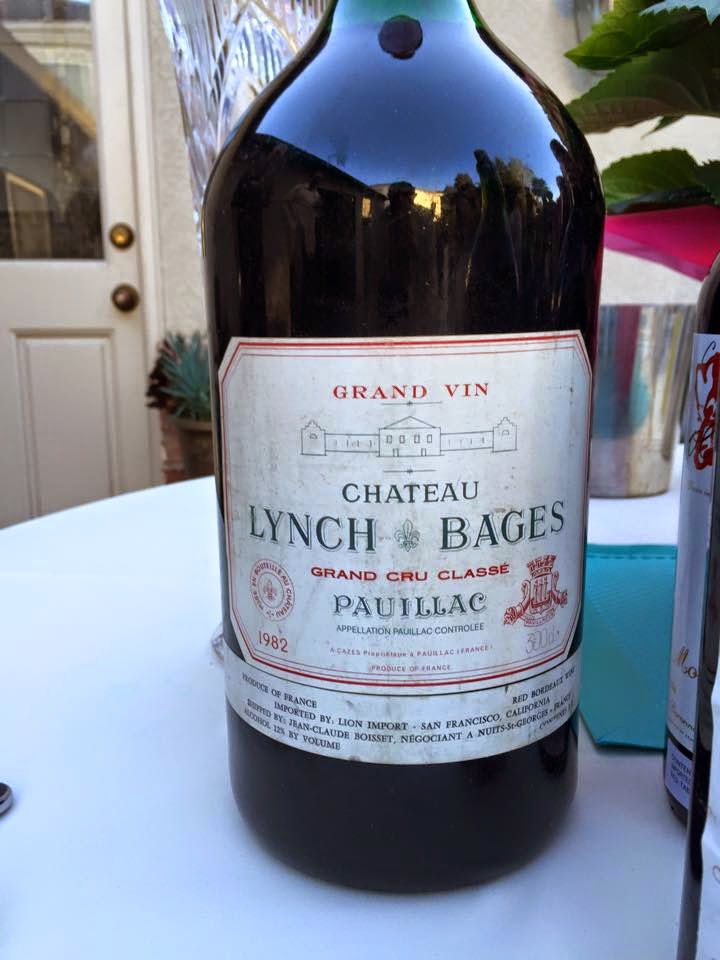 In the meanwhile Steve was busy pouring a 3 lt 1982 Chateau Lynch Bages into two decanters. We had this with our main course, a dry aged beef strip loin with mushroom duxelle, chasseur sauce and charred asparagus. The wine was quite robust, more so than its vintage-mate Mouton, a result of the 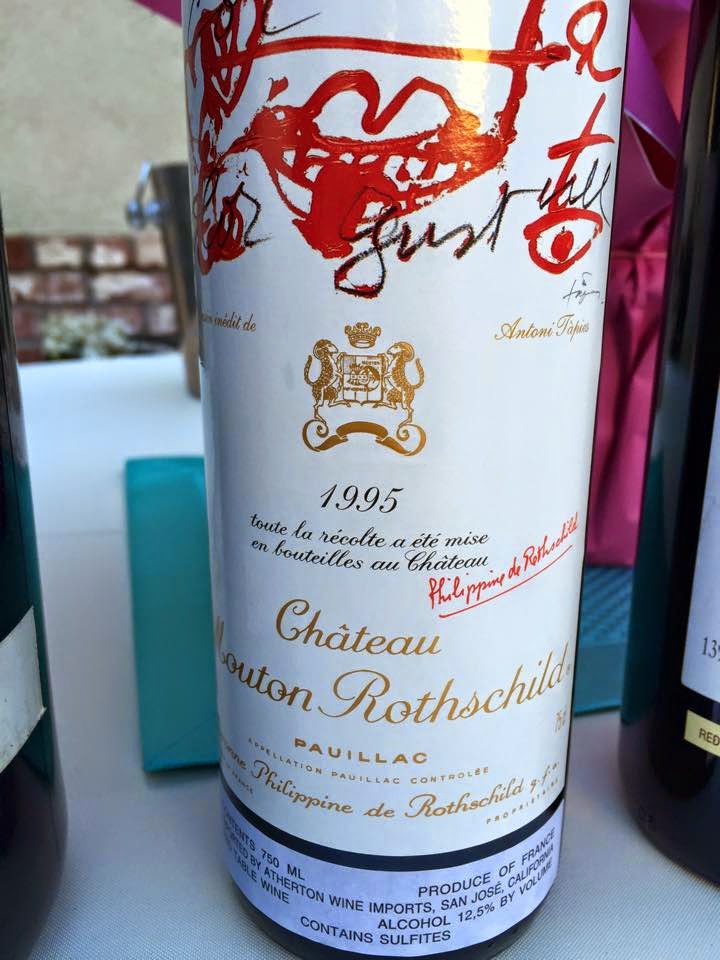 large bottle format, perfect with the steak. We now also opened a 1995 Chateau Mouton that Jeff Mansoor contributed, a mere child compared to the others, tasting with less nuance within this context. There were plenty of leftovers of the older, earlier wines and please pass me the … was still a common refrain.

I often find small details to be  unexpected highlights. A blackberry Cabernet sorbet served as a palate cleanser turned out so, not too sweet, not too tart, packed with flavor, a good prelude to chocolate mousse cake with yet another highlight wine. 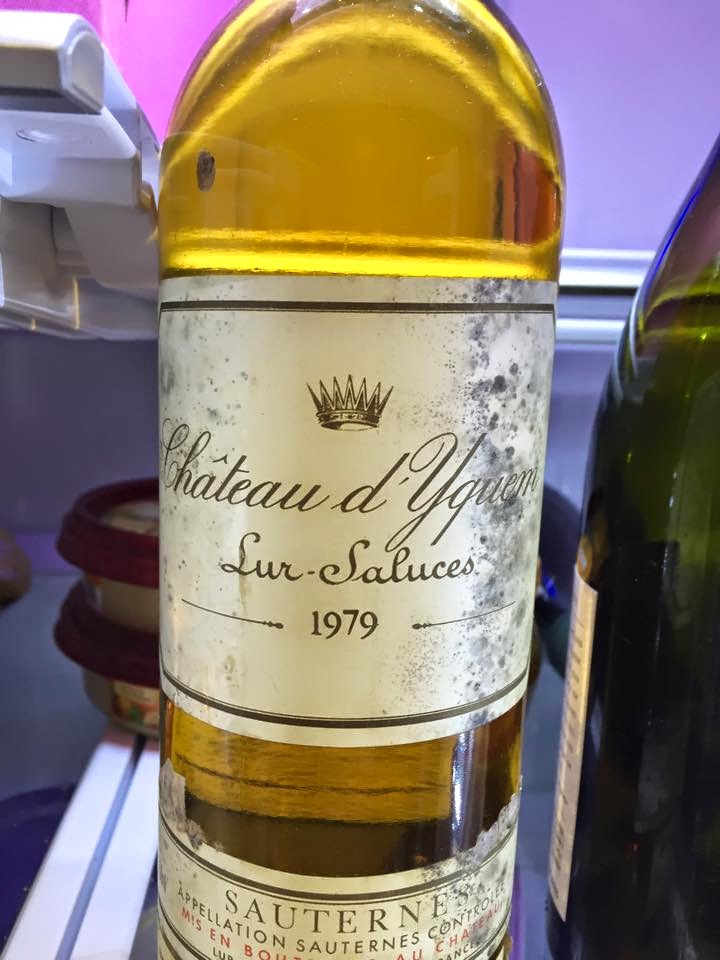 bottle. It featured plenty of peach and apricot but was lighter in sugar, a consequence of its age. It was well balanced, packing good acidity at the end, a good match with the chocolate cake.

By the time a cheese plate arrived most of us were full and tipsy.  We picked at sharp San Joaquin Gold with figs and walnuts, and Stilton and Chevre and cherries and cocoa nibs, more interested in lively, animated conversation than food.  We still sipped leftovers.

Before departing we had a group photo taken, a memento of an unforgettable dinner. I have always considered wine as something more than a mere beverage,  a social glue, a medium for forging and nurturing friendships. This magical  night was a perfect example. 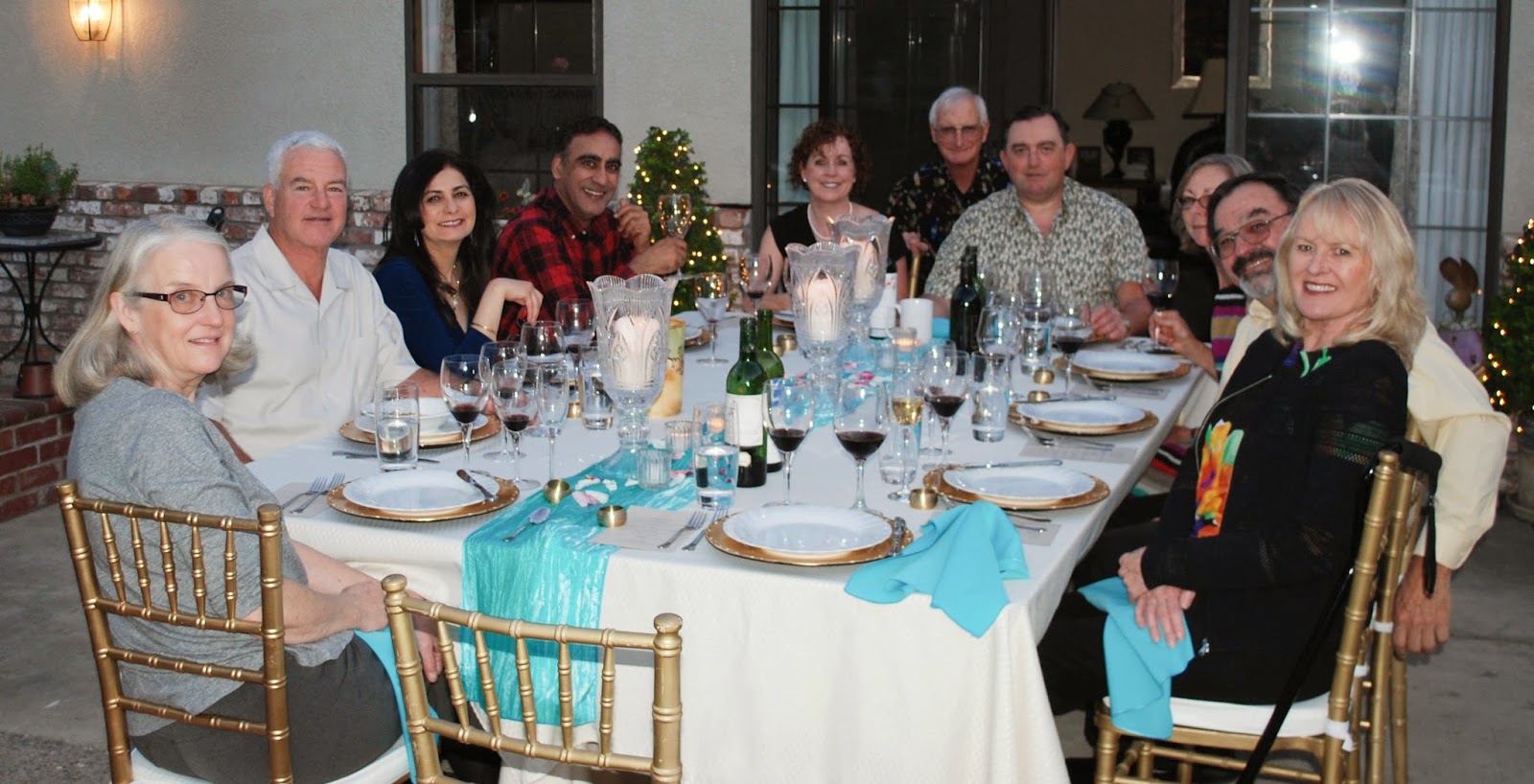 Steve and I shook hands good bye, closer now as friends than we ever were. There were hugs all around as our guests departed, also feeling the same.

As we returned to our messy kitchen in anticipation of a massive clean-up, our server approached us with the 3 liter Lynch Bages. “What do you want to do with this?”

To our surprise there was still quite a lot of wine left behind. Thirty-three years old, sat out there for hours, it must be spoiled, I thought. “Dump it!”  Fortunately Julie had a better presence of mind. How did it turn out? Stay tuned for my next blog.

IN THE HEART OF GERMAN WINE COUNTRY; DOCTOR’S VINEYARD AND AN UNUSUAL TASTING (DR THANISCH WINES)