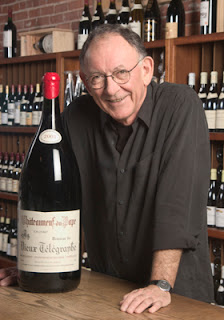 Wow! This broad and sweeping statement is not only an affront to Napa/Sonoma, so nearby,
an hour’s driving distance from Kermit’s famed wine bussiness in Berkeley, but also a big insult to the stodgy French winemaking establishment which has prided itself in being the original, indeed only “authentic” maker of Cabarnet magic. Hidden in the statement is a yet more grandiose shot across the bow of Robert Parker and his acolytes, from which Kermit distinguishes himself. I know, for I am one of Kermit’s disciples.

As I read a Wall Street Journal interview with him (WSJ 6/23-24/2012) aurthored by Lettie Teague who seems to specialize in featuring famous figures from the world of art, sports and food, and their wine preferences, I was impressed that Kermit Lynch was elevated to a similar celebrity status by the New York establishment. But I shouldn’t be. He is no longer just a wine merchant but a phenomenon onto itself, having earned high respect for his idealistic zeal in marketing only certain wines and wine-styles that only he espouses. These are the antithesis of the widely followed Parker ideal  of overextracted, overoaked and overpriced wines. If in popularity Robert Parker is the Microsoft of the world, Kermit Lynch would be the Apple, sticking to an iconic style that engenders a cult following which has made him a great success, and  unabashedly assaulting his foe with statements like Bordeaux is just Napa Cabarnet.

In my opinion we have to take Kermit with a large grain of salt. He has a clear bias against California winemaking which he has excluded from his store altogether. He likes and markets the more food friendly Old World style whites and reds which are crisp, true to their fruit, not overly “made-up” by their winemakers, and with robust acidity in their finish. He is above all a champion of Burgundy, the Loire, Provence and Languedoc, with a bit of select Italy added in. The only celebrity labels you’ll find in his line-up are those that he himself elevated to this status like the Vieux Telegraph he is seen with in the photo. His imports from Bordeaux consist of a few select lesser labels such as Ch. Aney or Bellevue, and he is definitely not a marquee Bordeaux man. Thus it is natural for him to pooh-pooh those two regions across the ocean that he dislikes.

While I have collected and drank countless Kermit wines, I am also a student of Bordeaux, and I can tell you with cetainty that the top names in the area are not emulating the California style. These are the 64 labels that belong to the 1855 Cru Classe, and a few other celebrities such as Petrus, d’Yquem, Angelus, and Cheval Blanc. But Bordeaux is a vast region where enormous quantities of wines are produced, all overshadowed by the star labels, and many looking to stand above the crowd. It is there, especially in the wines of St. Emillion that the phenomenon of Napa-like wines is indeed emerging. From my own past tastings I note for instance, a 1998 Ch. Berliquet and a 1999 Ch. Pavie Macquin, both St. Emillions which gave a Napa impression in blind tastings.

Kermit’s beef with Bordeaux is the fact that over the years they have genuflexed to that American, Parker, and adjusted their styles to please him, for Parker, whether they like it or not, sets their prices. No one is more disturbed about this than the French themselves. But what can they do? C’est la vie. In the meanwhile Kermit, a Francophile who has been awarded the Legion d’Honneur for his service to the French wine industry, another American with clear influence, can sit at his corner and take potshots at the flip side of the coin with glee.

A GOOD NOVEL, A BAD INFLUENCE