A REVELATION ABOUT PINOT NOIR GEOGRAPHY 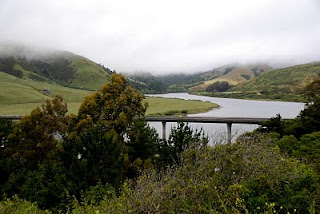 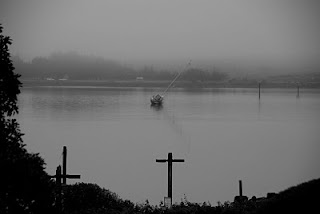 An old Turkish proverb goes, “it’s not who reads a lot that’s knowlegable, it’s who travels a lot”. A suitable point for the middle ages when what you read was mostly religious dogma, but what you saw in journeys, arduous and dangerous as they were, was more valuable. Nowadays the proverb no longer applies, except that is, in the wine world. Have you ever tried to read about some complex wine geography like Bordeaux or Burgundy and gotten totally confused? What about the hundreds and hundreds of wineries of California in what is now a dizzying array of appellations? When it comes to the wine world, a brief and simple journey can teach you more about the lay of the land than the encyclopedic volumes of wine atlases.
Case in point: in my recent biking-wine tasting trip to Sonoma County, I came upon a revelation that’s probably obvious to most wine professionals, a unifying concept about California Pinot Noir geography. It happened when we were bussed from sunny Sonoma to Bodega Bay on the Coast. The next morning we all awoke to a gloomy fog and drizzle, as you see in the photo I took of the Bay on the left. We were transported, seemingly overnight, from a California summer to a New England autumn. We all donned our biking clothes reluctantly and shuffled on to breakfast at the restaurant of the Inn at The Tides, right on the water, with a close-up view of the miserable fog. We ate and we wished that we could return to bed. But no! We had a 41 mile bikeride ahead of us, 10 miles straight north towards Jenner on Highway 1, and then inland along the Russian River Valley, through Guerneville to Healdsburg. And so we rode in the cool, drizzly, foggy, wet road, wishing we had windshield wipers on our biking glasses.
At about the 10 mile point, slightly south of Jenner, we came upon the mouth of the Russian River as it empties into the Pacific (the picture to your right). From then on, as we rode inland eastward, the fog cleared and we eventually arrived at a sunny, but windy Healdsburg. Here’s the curious part: as we stopped in various wineries along the way, and after we arrived in Healdsburg, we were told that the misery we encountered at breakfast was also present all the way into Healdsburg and Santa Rosa, some 20 miles plus from the Coast, and it cleared towards the early afternoon.
It was then that I realized all ideal spots for Pinot Noir in California have the same geographic feature that we had just ridden our bikes through: a natural funnel sucking cool air and fog from the Pacific Ocean inland, to provide the lower temperatures necesary to grow this cool-weather grape. Carneros, the other major Northern California Pinot region gets its Pacific air through the San Francisco Bay, since it sits on the northernmost outpost of this rather convoluted body of water. As I pointed out in a prior blog about the wine “Seasmoke”, a cult pinot noir, the label actually refers to the Pacific fog sucked into an east-west valley in Santa Barbara County that is much like Russian River.
And there it goes. I can’t tell you the numerous publications I have read about pinot noir that probably made this point over and over. But seeing it with my own eyes in two areas, Carneros and Russian River, brought home the point better than those, what turned out to be empty pages.
Moris Senegor