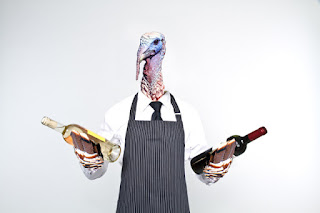 Years ago when I began wine blogging for our local newspaper, my editor asked me to write a piece devoted to advice on what wine to have for Thanksgiving. So, I did. It took a small amount of research, a few calls to local wine merchants, and the general themes turned out fairly straightforward. Since then I have noticed countless similar articles in various publications on the eve of every Thanksgiving. They typically all say the same thing over and over, year after year. So this year I present a more diversified approach to the subject, and keep the tradition, but in a non-traditional way.

The way I see it there are several basic approaches to wine decisions regarding Thanksgiving. The first, and I suspect most common is, “who gives a damn?”. A large population of teetotalers, beer and hard liquor drinkers probably scorn all the wine snobbery that goes on with this holiday, more so than others, because the occasion is so food centered. Since this group is probably not reading my blog, we won’t dwell on them much.

On the opposite end of the spectrum are the extreme snobs. These are the ones who open very special labels or vintages, usually -but not always – astronomically expensive, regardless of whether the wine matches the traditional Thanksgiving fare. They may do this out of a sense of genuine sharing with friends and family, or because they feel special occasions demand special wines. Of course many also do it just to show off. There is no advice to give these people. “Special” is in the eyes of the beholder. Who am I to tell them what to open?

The third approach is the sensible one,  an attempt to genuinely match wine to turkey and trimmings. It turns out this is fairly easy and cheap. Typical wines that go with the food include dry whites, such as French Alsatians or Burgundy, and light reds such as Beaujolais, Tuscan (not super-Tuscan) sangiovese, or Pinot Noir. Most can be had at prices that won’t break the bank. Here’s where all those advice columns become redundant. How many times can you repeat this basic theme? Endlessly, it turns out.

But wait. There is one more approach. Mine!

What if we turn the paradigm on its head? What if, instead of matching wine for Thanksgiving, we match Thanksgiving for wine? If you can find it within yourself to do away with turkey, this turns out to be eminently feasible.

My favorite special meat, one I’ve loved since childhood is lamb chops, “pirzola” for my Turkish friends. My favorite wines are Southern Rhone reds (Gigondas, Vacqueras, Chateauneuf du Pape). So I have created my own personal Thankgiving tradition that has been going quite well since 2008. Pirzola, a lot of it, and Chateauneuf, nothing else. Bread, salad, stuffing and other starches, desserts, they are all fillers. Thanksgiving redux. Down to the bare essentials, the ones that give most pleasure.

It works. Try it some time with your own favorite meat and wine. You can add some trimmings too if you so wish. This will be your own personal tradition after all.

Before I forget, I should mention that I do also experience the traditional turkey with all its trimmings, and with proper dry whites and light reds every year. It happens the Monday before Thanksgiving, at George Heron’s house, where we have a monthly wine tasting group. It is a pot-luck event that satisfies all cravings for tradition, so that when the real day comes it is easier to be non-traditional. After all what’s Thanksgiving without turkey?

HOW CAN HUMDRUM CALIFORNIA SPARKLERS CALL THEMSELVES CHAMPAGNE? A BRIEF HISTORY

WINE ON THE ROCKS?!