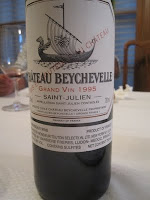 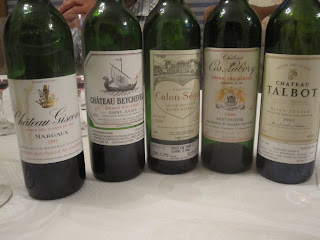 One of the nice advantages of associating with fellow wine enthusiasts is the opportunity it affords to engage in tastings  like the one we had in George Heron’s house recently. A number of us dipped into our collections and sampled the current state of the 1995 Bordeaux vintage with the bottles you see in the photo.
1995 was the first great vintage in my own personal collection, there being none other since 1989 & 1990. While I have tried to stay disciplined and not open much of my ’95’s, over the years they have nonetheless withered away into around 8 or 9 bottles. Thus it was with much anticipation that I approached this tasting. Assembled were two St. Julien’s (Beychevelles and Talbot), 2 St. Estephe’s (Calon Segur and Cos Labory) and one Margaux (Giscours).
Overall the wines showed well, although there were differences. Most notably the Calon Segur was still young and immature, packing a wallop of upfront dark berry  fruit, mid palate spice and robust finish. This wine, obviously in need of longer aging contrasted sharply with the Beychevelles and Talbot which featured elegant, smooth, silky textures, more mature tobacco, tea leaves and mint flavors, and  complex but understated progressions in the palate.
An interesting opinion from George was a good pearl to remember when approaching older Bordeaux. He stated that his favorites always featured a combination of persistent young fruit flavors, and the more mature flavors of “dried stuff” (tobacco, tea, gunpowder etc).  Catching a wine in just that phase, as maturity emerges but youth is not all lost, is quite tricky, and to a certain extent depends on luck, with bottle to bottle and cellaring variations injecting elements of unpredictability to the experience.
The only disappointment of the tasting was the Giscours (Margaux) which seemed to lack the same complexity and elegance of its other counterparts, its fruit already in decline.  However had it been tasted alone, and not compared to others it may have shown better.
Unless you have a lot of expandable money, putting a tasting like this together is only possible in a communal setting where like minded collectors share their possessions. Tastings such as this are testaments to the long term appeal of wine, both in following the saga of a vintage, and as an element gluing friendships. With 1995, which still has a long way  to go, there will be more upcoming chapters in its story. Hopefully I will have more opportunities to experience them.