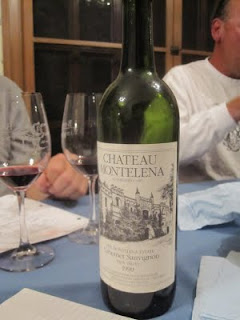 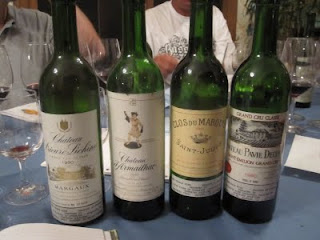 Ever since the “Judgement of Paris” of 1976 there has been a tension between the U.S. (specifically California) and France in whose wines are better. While the question remains in the eyes of the beholder, with different wine lovers lining up on one side of the Ocean or other, comparative tastings a la 1976 have become a classic experience. When someone suggested that we pit California Cabarnet (sauvignon – that is) against the much revered Bordeaux, for the equally grand year of 1990 for both, we had an intriguing match up.
And so we assembled at George Heron’s house on a rainy Tuesday night, the largest turnout ever, nine of us, to compare the wines we had amassed from our collections or purchases. We had 4 Bordeaux (the picture on the right) and 3 Napa Cabarnets, all 1990.
The results were quite predictable. The Napa ones showed their age. They did not seem to carry their years quite as gracefully as the Bordeaux. One bottle Conn Valley was the worst of the bunch for everyone involved, with a port-like, “shellaky” nose, out of balance profile, rough tannins and tart finish. A Beringer Reserve received mixed reviews, some liked it, some didn’t. The best of the Napa was the Ch. Montelena (picture to your left), much revered, well tried, and an original contender in the 1976 Judgement of Paris (albeit with their chardonnay).
As for the Bordeaux, my God! Were they ever so good! The Prieure-Lichine, D’Armaillac & Clos du Marquis were all superb. Well balanced, great Bordeaux noses, complex structures, delicate textures. All Left Bank. The only Right Bank in the bunch, the Ch. Pavie Decesse was somewhat less overwhelming with its nose and structure, but still identifiable as a Bordeaux.
I am not sure that one can draw general conclusions out of 7 bottles, especially with a Bordeaux biased palate (myself) reporting them. But for 1990, for me, Left Bank Bordeaux reigned supreme. Montelena was a close runner-up. For those who care about such comparisons, I suggest more comparative tastings. Ours was so popular that we decided to repeat the theme. Next month we will compare 1994 California (a good year), to 1995 Bordeaux (a great year). Stay tuned.

A UNIQUE DINNER IN PARIS, AT THE EIFFEL TOWER